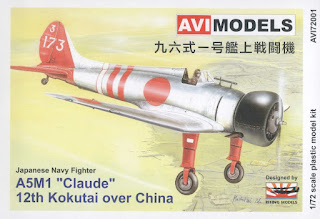 These new 1/72 short run injection moulded aircraft kits are a welcome venture by AVI Print as AVI Models in collaboration with Rising Decals and the first subjects were the Mitsubishi A5M1 "Claude" and A5M3a. Box art is in the traditional style rather than 3D cgi, depicting single aircraft in peaceful flight. The kits are modular with a standard frame for wings, undercarriage and common parts together with an additional fuselage frame with other details as specific to the variant. The parts are moulded in mid grey plastic with fine engraved surface detail but will require some sharp-eyed clean up as there is a small amount of flash here and there. The wing roots and wing parts will especially need care and dry fitting is recommended. The monochrome instruction sheet has a parts schematic and shows the 10-stage assembly sequence as exploded views without text. 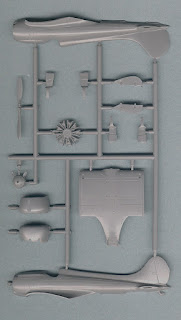 The A5M1 consists of the standard frame for wings, etc., and an additional frame for the fuselage, wing centre section, engine, cowling, prop, external fuel tank and extra undercarriage parts for the spats removed option, the latter a nice touch. The tail wheel assembly is moulded integrally with the port fuselage half but the arrestor hook is a separate part. The undercarriage parts consist of separate wheels to be trapped between the fairing halves, either with or without spats. The interior consists of a forward bulkhead with integrally moulded machine gun breeches and ammunition container, separate instrument panel,, rudder pedals (two identical pairs with different part numbers which is unexplained), stick, early pattern seat, cockpit floor and rear bulkhead frame. The fuselage sidewalls also contain moulded-on detail of ribs, stringers and equipment boxes. The instrument panel is plain without any surface detail, engraved or moulded and there is no decal alternative, so modellers will have to fabricate or paint any instrument details themselves. There is no colour instruction for the interior so other references will need to be consulted for that. Both the Fine Molds and Wingsy 1/48 Claude kit instructions suggest the green 'Mitsubishi Cockpit Colour' (Gunze 126) as do the 1/72 Fujimi kit instructions. 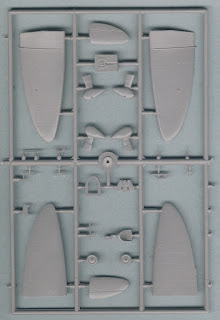 The wing construction sequence requires the upper and lower wing halves to be fitted to the centre section before the whole assembly is offered up to the completed fuselage. The wing parts are simply butt-joined so care will be needed. The tailplanes have tabs to insert in wing root sockets in the conventional manner.

The engine consist of two parts with a two part cowling. Although exhaust apertures are included on the cowling parts and exhaust depressions on the fuselage parts I could see no provision for the long exhaust pipes of the A5M1 (as shown on the box art). Small additional parts which are included in the kit are the retractable stirrup, aileron actuators, gun camera with mounting and optical gun sight. A pitot tube on the starboard wing must be scratch built. The windscreen is vacformed but two are provided

The A5M1 was powered by the Nakajima Kotobuki 2 Kai A rated for take off at 580 hp and 630 hp at 5,000 ft. This powerplant had a narrower chord cowling than the A5M2 (as kitted by Fujimi) and a smaller diameter prop, whilst another difference was the slightly narrower fin chord. Only 75 of this initial variant were delivered so the kit is really for the purist who wants to display a complete Claude line up or to represent the aircraft of the two aces whose markings are included on the decal sheet. 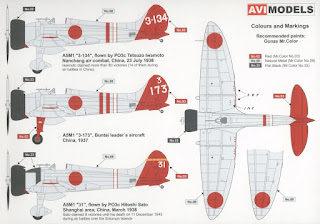 The sheet has markings for three 12th Kokutai aircraft operational over China from 1937-38 following the outbreak of the Sino-Japanese War: Tail code '3-134' as flown by PO3c Tetsuzo Iwamoto on 23 July 1938; '3-173' a Buntai leader's aircraft in 1937; and '31' as flown by PO3c Hitoshi Sato in the Shanghai area during March 1938. All the subjects are shown as colour profiles on the rear of the box in a natural metal finish with black cowlings and red painted empennage whilst '3-173' also has red painted undercarriage fairings. Rather than a pure "silver" paint an oxalic acid anodised finish is suggested, to present a subtle yellowish or slightly "golden" appearance. 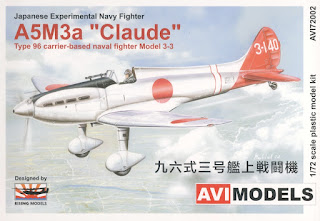 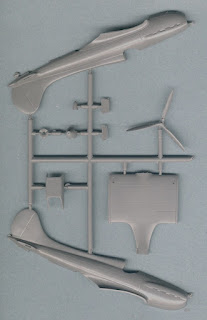 The A5M3a kit provides a new frame consisting of fuselage halves, wing centre section, radiator, three-bladed prop and spinner to build the inline-engined, experimental variant of the fighter. The interior parts are identical with the A5M1 and I have no knowledge of how they might have differed in any way due to the engine-mounted 20mm cannon.  The exhaust outlets on the cowling are well done and will repay careful painting. The radiator is a three part assembly with two grille inserts, also delicately realised. The spinner cannon muzzle is indented which will facilitate drilling out.  Other comments as for the A5M1. 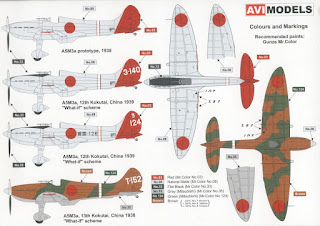 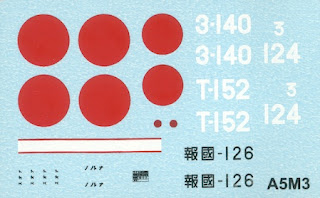 The decal sheet provides markings for four subjects: the prototype aircraft in 1938 and three 'what-if' propositions, two natural metal examples from the 12th Kokutai - '3-140' and '3-124', the latter with a Houkoku presentation marking - and 'T-152' a camouflaged example from the 13th Kokutai. 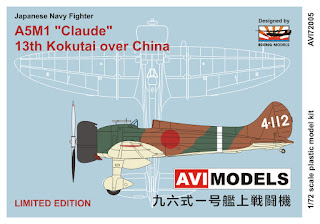 These are interesting and well produced kits with a limited edition camouflaged A5M1 now also available and other Claude variants on the way including the two seat trainer and A5M2 with enclosed canopy version. Together with Fine Molds delightful Ka-14 they permit the construction of a complete line-up of A5M development and production which I hope might eventually include the Army trialled Ki-18 and Ki-33 variants. With special thanks to Mirek of Rising Decals for the review samples. 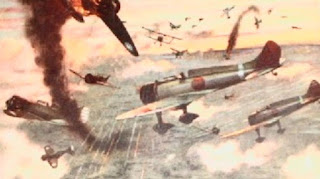 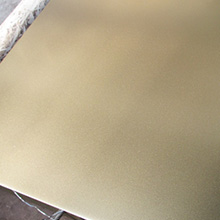