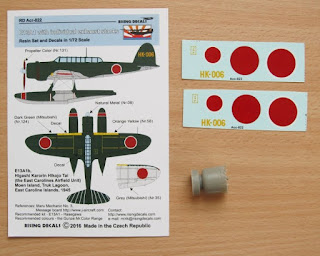 Concomitant to recent musings on Jake kits Rising Decals recent resin set Acr-022 includes a replacement cowling with individual exhaust stacks for the 1/72 Hasegawa kit (of which more anon). This set includes decals for a single dark green over grey example with the tail code HK-006 from the Higashi Karorin Hikôjô Tai (Eastern Caroline Islands Airfield Unit - 東カロリン諸島飛行場隊 ) based at Moen Island (now Weno) called Haru Shima by the Japanese, Truk Lagoon in 1945. This unit, engaged in routine sea surveillance and anti-submarine patrols, appears to have been formed from the rump of 902 Ku which had been dissolved in August 1944. A profile of sister ship HK-007 appeared in the Thorpe IJN book, identified as 902 Ku. Moen Island had a 3,340 ft long bomber airstrip, a combined seaplane base and fighter strip and a torpedo boat base. 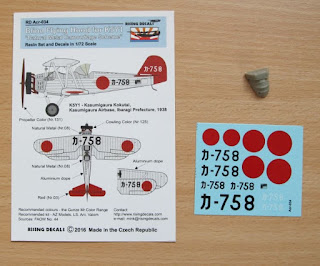 Two further sets, Acr-034 and Acr-035, feature resin blind flying hoods for the IJN biplane trainer Type 93 K5Y1. The first set (above) includes decals for a single silver doped example with red tail and the tail code カ-758 (Ka-758) from Kasumigaura Ku (Kasu-ku), Japan, in 1938. The second set (below) provides decals for two aircraft. The Takao Ku example with tail code タカ-501 (TaKa-501) at Takao, Taiwan in Fenruary 1944 has a disruptive camouflage pattern of dark green applied over the overall orange-yellow trainer colour. Where the green surrounds the tail code and fuselage number they appear to retain thin outlines of orange yellow but no provision is made for this on the decal sheet and it will present a painting challenge. A second Kasumigaura Ku example, カ-439, also in 1944, is in less challenging overall orange-yellow. Takao Ku, which went through several organisational changes, became responsible for training fighter pilots in January 1944 with large numbers of Type 93 aircraft. 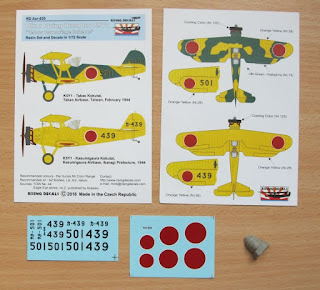 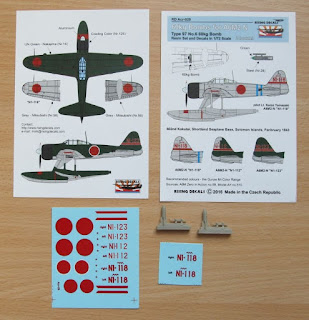 One other set that has escaped perusal is Acr-029 (above) which provides resin 60 kg bombs and racks for the A6M2-N Rufe floatplane fighter. Tail codes are provided for three bomb-toting aircraft of the 802 Ku at the Shortland Island lair in the Solomons, circa 1943, N1-118 in overall grey and N1-112 and N1-123 in dark green over grey. N1-118 is the well known aircraft attributed to Lt Kaiso Yamazaki with 'battleaxe' victory markings on the fin. Coincidentally the Hasegawa 1/72 A6M2-N is due to be re-released in February 2017 in a duo presentation (two kits on one box) featuring 802 Ku markings for three aircraft (two shown below) at the remarkable price of about £16.50 - good value these days, but get it directly from Japan. 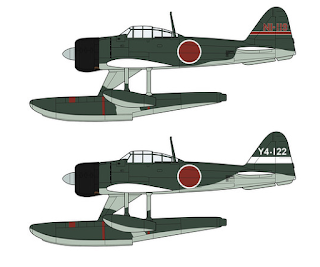 Finally two more Rising Decals 1/72 sheets which whilst not featuring Japanese subjects probably fall into the category of related topic rather than off topic and are well worth mentioning here. 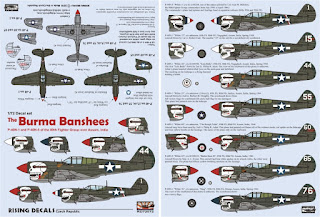 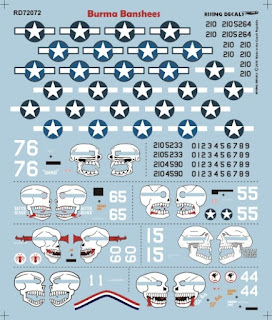 RD72072 'The Burma Banshees' (above) is a splendid set of decals for no less than seven P-40N fighters of the skull adorned 80th Fighter Group, operational over Burma in the China-Burma-India (CBI) theatre from bases in Assam, India. 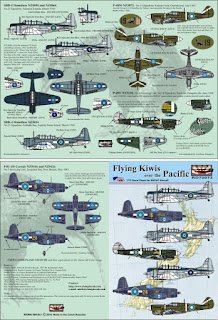 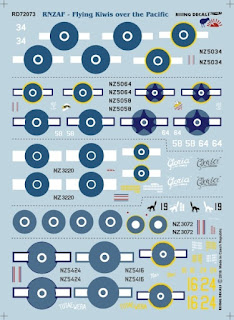 RD7073 'Flying Kiwis over the Pacific' (above) provides decals for a selection of seven colourful aircraft of the Royal New Zealand Air Force (RNZAF) operational in the South-West Pacific Area (SWPA) consisting of three Dauntless dive bombers - two SBD-4 and an SBD-5 - a P-40M, a P-40N and two F4U-1D Corsairs. The two P-40s represent popular modelling subjects - ace F/O Geff Fiskin's P-40M 'Wairarapa Wildcat' of 14 Sqn in 1943 and P-40N 'Gloria - Lyons' of 4 SU and 18 Sqn in 1944 - previously provided on other decal sheets with variable success so especially welcome from Rising. Please note that the white identity bands are not included and must be applied with paint or decal strips by the modeller. The operations of the RNZAF in the SWPA have been somewhat overshadowed by the USAAF and RAAF  but are worthy of greater attention. In that vein I can very happily recommend  the effort to obtain a copy of Chris Rudge's superlative 'Air-To-Air', (below) a limited edition tome from 2003 which examines the air combat claims of the RNZAF in 408 detail packed pages with many photographs. 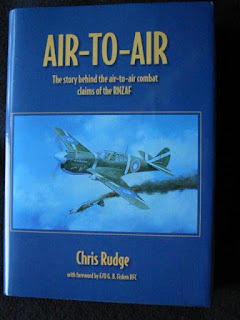 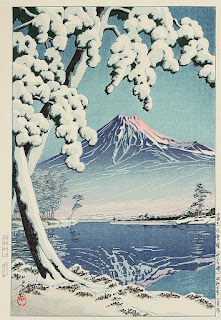 With very best wishes for the Christmas season and New Year to all friends and readers of Aviation of Japan. 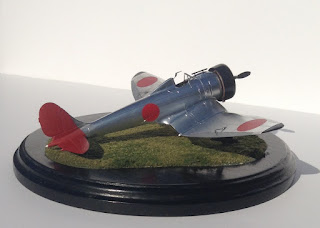 Following on neatly from recent A5M Claude features Richard Tool has kindly shared these images of its Dad, the Mitsubishi Ka-14 prototype, in the form of his build of the 1/48 scale Fine Molds kit. This previously obscure prototype aircraft became more widely known as a result of the 2013 Studio Ghibli animated film 'The Wind Rises' by Hayao Miyazaki which dramatised the early life of the Mitsubishi designer Jiro Hirokoshi. Without this film it is unlikely we would have seen a mainstream kit of this prototype aircraft. 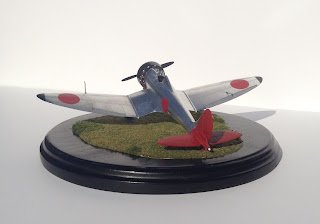 Richard built the model straight out of the box with the exception of thinning the trailing edges and adding Eduard IJN lap belts. The cockpit, cowl ring,  engine, reduction gear housing, wing tips and tail were painted in custom mixes of Tamiya paints. The main landing gear fairings were painted with Vallejo MetalColor acrylics whilst the rest of the airframe was covered with Bare Metal Foil Matte Aluminum to produce a fine looking model in appropriately seasonal colours of red and silver. A full build report can be found at the Aeroscale website  here. 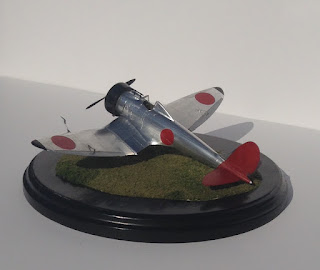 Fine Molds also released a 1/72 scale version of the kit but available only as a special issue with the January 2014 edition of Model Graphix magazine. In 2013 Shingishenka published a modelling guide to the A5M series "Mitsubishi A5M/Mitsubishi Ka-14 Plastic Model to Begin from the Beginning" which included an article on the Ka-14 with a 1/32 scale conversion feature based on the Special Hobby kit. This book includes serviceable 1/72 scale drawings of all variants and although the text is in Japanese it is worth obtaining for anyone planning an A5M family build and still available. Some confusion has arisen over the colour of the Ka-14 as a result of Studio Ghibli's depiction of the aircraft - and as shown in the Fine Molds box art - which looks white, suggesting a light grey paint, whereas the original was plain aluminium. 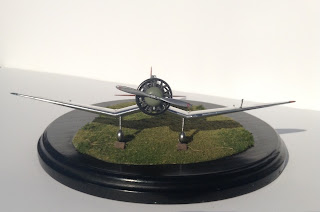 Ka-14 was actually the Mitsubishi company designation for the experimental aircraft to be produced in response to the February 1934 Imperial Japanese Navy invitation to design a 9-Shi single-seat fighter to  a specification drafted by Lt Cdr Hideo Sawai of the Naval Air Headquarters Department of Engineering. The aircraft was completed within a year and began tests at Kagamigahara in February 1935, proving the cantilever wing in a fighter aeroplane suitable for the Navy. The design impressed although development and four additional prototype builds incorporated a succession of power plants in attempts to overcome various engine issues whilst the cranked wing was modified to a straight centre section from the second prototype. 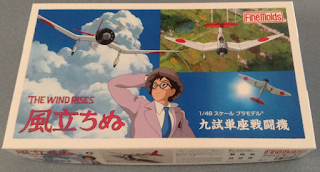 With special thanks to Richard for sharing these images of his splendid "Claude's Father" model and providing details of the build. 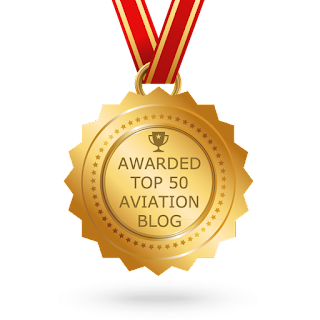 Aviation of Japan is honoured but surprised to have been ranked 27th in Feedspot's Top 50 Aviation Blogs with no Twitter or Facebook followers! The blog has now been going strong and sometimes less than strong for more than 8 years and has generally been a most enjoyable and rewarding undertaking, not least in getting to know the many international contributors who have very kindly shared information and images, assisted with translations and/or provided comments and expressions of support. On behalf of Aviation of Japan and personally - thank you and best wishes.

Updated Part 1 with images and information from the 1978 Hasegawa catalogue, Japanese edition. This has a complete listing of A and B kit numbers with their corresponding JS designations.
Posted by Straggler 脱走兵 at 14:09 No comments: