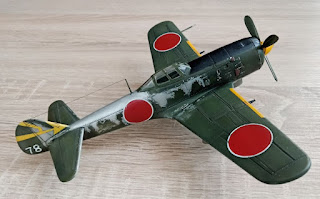 With the very kind permission of the eBay seller an opportunity to share these images of a well made model of the Nakajima Ki-84 Hayate from the rare original Marusan 1/50 scale kit of 1961. The kit was re-released twice with new box art by Marusan and subsequently by UPC in 1966 and RSL Classic Models (a New Zealand based re-seller) in the mid-1960s (the various box arts are shown at the bottom of this feature). At the time of its release the engine and cockpit detail were considered noteworthy and the overall appearance commendable. This feature segues neatly from the subject of old Japanese kits of the 1960s to an autumnal season of single-engined Army fighter models including the latest Hayate kit to be offered in 1/72 scale. 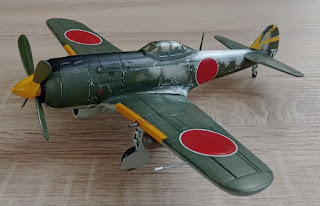 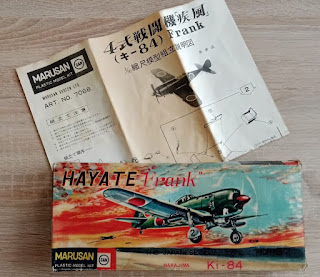 Marusan pioneered plastic model kits in Japan with the release of the Nautilus nuclear submarine in 1958, subsequently releasing an extensive range of aircraft kits in various scales including a series of 1/100 kits and 1/50 scale classics such as the Ki-46, Ki-15, Navy Type 10 triplane torpedo bomber and Aichi 'Jake', all later released by UPC. The company was not without controversy in Japan with a lawsuit following their attempt to copyright the term 'plastic model' and accusations of copying foreign-made kits. The company ceased the plastic kit business in 1967 as a result of bankruptcy. 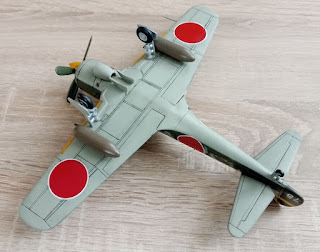 With very special thanks to li_lit for permission to share these images. For those wondering what might have inspired the camouflage scheme on the UPC box art by Andrew 'Scottie' Scott Eidson (shown below) watch this space! 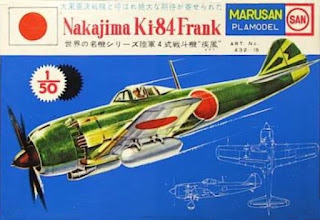 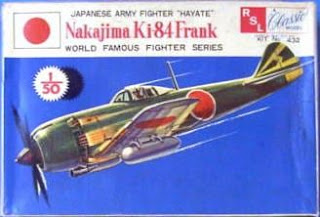 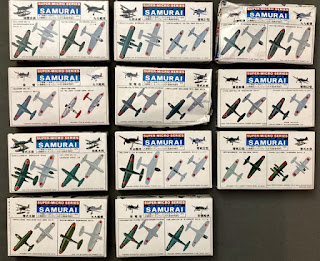 In response and follow-up to the blog post about the tiny Nichimo E7K2 kit from their 1/.300 scale Super-Micro 'Samurai' series, correspondent Mike Driskill has very kindly shared these images of his own collection of other IJN aircraft types in that range together with the rather splendid display base he created for them. On the display base (shown below) a 1/144 scale F-Toys N1K1-J provides a scale reference.

Initially attracted to the floatplanes Mike went on to acquire as many of the kits as he could find. He considers them to be remarkably nice considering their age and size, and the instructions even make suggestions for detail additions as shown below (note extra Jake struts in dashed lines) and for conversions (Rex prototype). 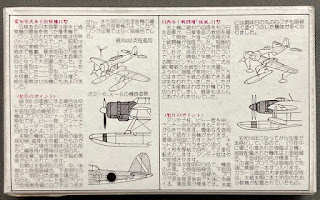 Mike managed to assemble most, added a few details, hollowed out radial cowls, etc., but never got the overall project finished as he was stymied by the biplanes! Seeing the models and the display base here it is a project that deserves completion. 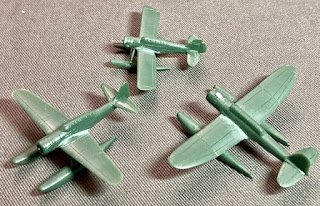 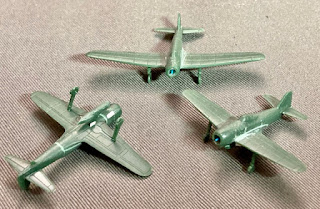 The images reveal that the subjects are well-shaped and pleasing given the limitations of the scale. In another comment Mike has speculated about the full extent of the range as 'Rufe', 'Jack', 'Grace', and a radial-engine 'Judy' are conspicuously absent from this otherwise impressive selection of major IJNAF single-engined wartime types. The range did extend beyond Japanese types as this website explores, with images of some of the models painted with decals applied, including 'George', 'Rex, 'Pete' and 'Jake'.  The site also provides details of other manufacturers 1/300 and near scale aircraft kits.

Nichimo or Nichimoco as they became gave up the plastic model kits business in 2013 after 62 years but this blog's retrospective on the company's aircraft kits failed to include these 1/300 scale kits. Sadly none of the Nichimo moulds seem to have re-surfaced under other brand names.

With very special thanks to Mike for extending knowledge about this range of kits and for sharing these images. 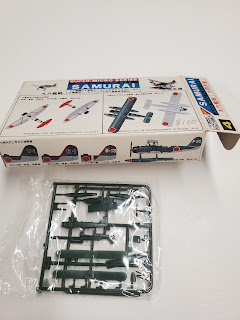 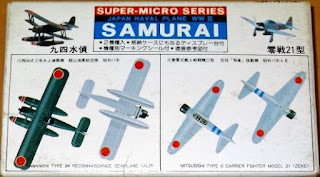