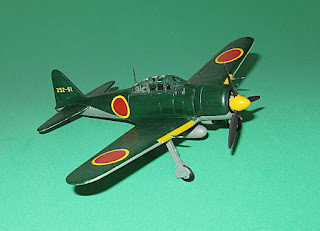 Way back in 2008, the first year of this blog, a Kit Trivia article on the Frog Zero was published,  including a photo of that kit built, painted and displaying original decals as intended. Now the builder has kindly got in touch and still in possession of the model has dusted it off and sent new photos of it.  Mike Kirk cannot recall the exact date that he built the kit but it was most probably around 1960. The engraved panel lines reveal that it is from the original mould, before the AMT 'improvements' resulting in raised lines. The model was brush painted freehand without the use of masks and, most likely, with Humbrol paints, without any mixing of colours. 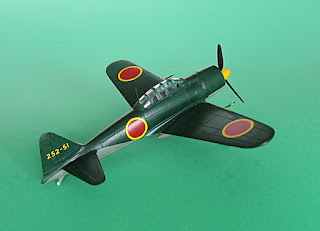 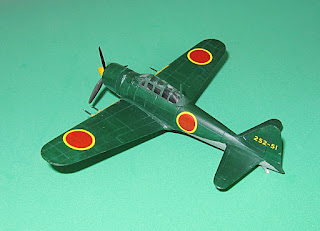 Warts and all - it had no interior and no wheel wells, the undercarriage legs being plugged into slots - this kit has been a nostalgic favourite and rated as superior to its Airfix and Revell contemporaries, as well as to those early non-standard scale kits from Japan. It is a hybrid in terms of mark but still manages to look the part after 63 years of wonderful advances in mould making, kit engineering and accuracy. And it conveys oodles of nostalgia for those once satisfied by simpler things. This was the Zero that lurked in predatory pairs over jungle settings in many a Fleetway Library and Commando comic book.

Frog considered a new mould for the Zero in 1971 which morphed into a kit of the floatplane fighter 'Rufe'. That mould was completed in 1975 and planned as kit F234 but was never released although decals and H1-type boxes were printed. The A6M2-N kit was subsequently released by Revell, of which more anon, featuring the originally intended Frog box art. Frog's only other Zero venture was to release 15,000 Hasegawa 1/32 scale kits of the A6M5 as F287 under the Frog logo between 1972 and 1974. 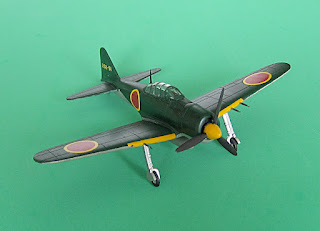 With special thanks to Mike for kindly sharing these images of a survivor and a testimony to a gone but not forgotten classic. 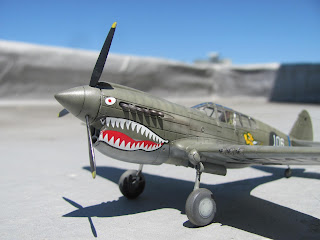 The Year of the Ox has finally trundled off and the Year of the Tiger begins (fingers crossed). To welcome the Chinese New Year some very fine 1/72 scale aircraft models in Republic of China Air Force livery expertly built, photographed and very kindly shared here by Rob Ronconi. 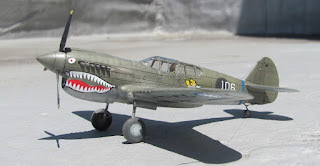 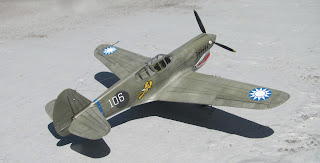 P-40E-1 '106' was one of several reinforcement aircraft for the American Volunteer Group (AVG) 'Flying Tigers' arriving in China after delivery flights from Accra, West Africa, in late March 1942. US serial numbers on fins were omitted/obscured before delivery with no trace, whilst US fuselage stars were overpainted with dark green paint after arrival and the RoCAF 'sun' roundels applied as decals on the wings. Disney 'Flying Tiger' decals were also applied.

The I-15 bis was made from the ICM kit. This Polikarpov biplane fighter, designated E-15 in Chinese service and identified as such in Japanese combat reports, was flown by Russian volunteers and Chinese fighter groups from 1938 to 1941, a total of 289 being imported. 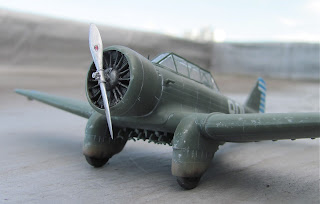 The Northrop 2E Gamma was made from an Azur kit but Rob reports that it was very tricky and he faced difficulty with the centerline bomb rack apparatus as they were tiny fiddly parts, but somehow managed to fit them all in. Rob used Albion Alloys brass for the scratch-built pitot tube. The rest of the build was pretty straightforward, although he had issues with the decals breaking up on the rudder in particular requiring a little patch and paste surgery. Rob now wishes that he had opened up the canopy to include a rear gun as that would have been a little more interesting and possibly attaching actual underside bombs. The real issue during the build was that he did not have any photos or references about how to put it all together - for example the somewhat strange ventral gun position ended up being guesswork.

The Gammas were delivered between February and September 1934, two 2E, seven 2EC and 15 2ED for a total of 24 with another 25 2E subassemblies and components ordered in September and delivered during 1935 to the Central Aircraft Manufacturing Company (CAMCO) at Shien Chao. The Gammas were natural metal overall and instruction was provided by American flight instructors like Reed Knight. In service they were field camouflaged dark green. At the outbreak of hostilities with Japan in 1937 the Gammas were operated by the 9th, 11th, 14th and HQ squadrons of the 2nd Air Group, with nine of the type in each squadron, and participated in bombing operations against Japanese forces in and around Shanghai, including the accidental and disastrous bombing of Chinese crowds in Nanjing Street on 14 August 1937 when the veteran IJN cruiser Izumo was being targeted. 150 civilians were killed and hundreds injured. The relationship, if any between the 2nd Air Group's 14th Squadron and the later 14th Volunteer Bombardment Squadron (or 14th International Volunteer Squadron) is obscure. The latter was equipped with Vultee V-11 bombers flown by foreign volunteers, including pilots from France and the USA, during 1938.

Rob's splendid B-10 was made from the venerable Williams Brothers kit. Rob recalls that the company was always a little mysterious and their kits difficult to find. He remembers once driving by chance through their small Southern California town of San Marcos where they were producing their kits at the time and hoping to find some secret factory store - but he never did find a trace. Nevertheless he feels that they should be credited with producing some really great models of some very esoteric aircraft.

He found the Williams B-10 difficult to put together ,the main hindrances being the clear canopies which he ended up making vac-u-form copies. He scratch-built some accessories, using old AeroClub metal Browning machine guns, Tom’s Model Works photoetch parts for the gun mountings, and a bullet belt. Little details like that made it more modern looking and in the end he felt as though it still holds up well next to the more modern Special Hobby kit which he reports is easier to build. Two of the Martin bombers flew an audacious nocturnal mission over Japan in May 1938, dropping propaganda leaflets over cities on Kyushu. The mission, which required special navigation measures incorporating air and ground radio equipment, was led by Capt Hsu Huang-sheng with Lt Tung Yen-po flying the second bomber, taking off at 1523 hrs on 19 May 1938 from Hankow, via Nanchang and Chuchow, to the advanced Lo-she airfield at Ningpo. The bombers then sortied from Lo-she at 2348 hrs, reaching the Japanese coast at 0240 hrs and flying across Nagasaki at 11,500 ft. A flare was dropped and leaflets scattered whereupon the city blacked out, but there was no anti-aircraft fire. The bombers continued on to Fukuoka and over other cities, dropping flares and leaflets, before turning for home just after 0400 hrs. The two Martins were fired on by Japanese ships off the Chinese coast but landed safely at Yushan and Nanchang at 0848 hrs and 0924 hrs respectively.

Last but by no means least the captured Nakajima Ki-43-I 'Oscar' in RoCAF insignia was built from the Fujimi kit with BestFong decals applied. With very special thanks to Rob for sharing these images and details.