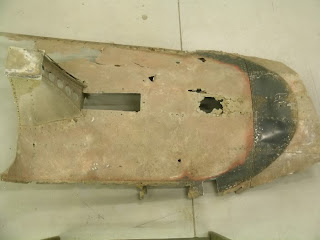 Although the Kariki 117 document contains a chip for black, Q1, this was not the colour used to paint the cowlings and cockpit decking on the Zero fighter. That colour was a very dark blue-black called "Chi-57a dai san syu (the third type) Q1". This was specified as the colour to be applied for anti-glare use on Japanese Navy aircraft, including the cowling and cockpit decking under the canopy of the Zero fighter.
The pigments for this paint were Chi-43 'gunjyo' (ultramarine - Methuen 21C8) and Chi-40 carbon black to be mixed in the ratio of 1 to 4 parts. This resulted in a very dark blue-black, similar to the RAF 'Night', where the blue was almost imperceptible when the paint was first applied.
With ultra-violet exposure the applied paint faded back to a blueish-grey, the stages being demonstrated by the chips above. An extremely faded example became almost a light blue-grey. The remnants of anti-glare paint on the Zero decking shown are described as "faded blue-black".
Was this formula, or a similar one, used for the anti-glare panels on Army aircraft? Maybe.
Images credit: Zero Deck artifact via Derek Brown aka Buffie; Rendered colour chips © Straggler 2008
Posted by Straggler 脱走兵 at 14:02