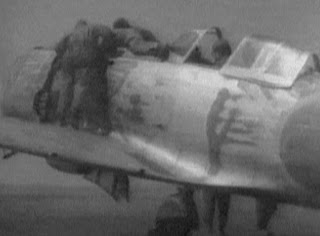 I was studying the well-known Akeno Hayate film, pursuant to something else entirely (but not wearing my anorak), when I noticed something interesting for the first time. There is a "coating" along the whole length of the fuselage, broken only by the natural metal reflection just below the cockpit and at the wing root. At first I thought that this was just non-reflection of the metal surface - but it isn't. It appears to sit over the sparse green mottle, which makes me think it is some form of residue from the engine (oil?) or staining from the exhaust, but I'm not sure. If it is the latter then it is not the type of staining usually associated with exhaust effluence as it appears to have spread a fine and constant film along the whole length of the fuselage. Perhaps the result of that "fan" of thrust exhaust pipes? If it is oil maybe that is what is so engaging the two groundcrew's attention? 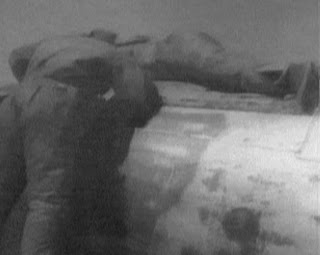 Is it overspray from the mottle? Don't think so - too smooth and regular. A coating over the natural metal? Maybe. But as mentioned it appears to be over the green mottle not the other way around. This "coating" runs to the length of the tail and also appears to be the cause of the "greying" of the Hinomaru border but more curiously seems to be over the wings too, which show little or no reflection from the natural metal at all. The latter may be just be the result of a denser mottle applied to the wing upper surfaces as discussed before. Whatever it is it's probably worth a passing thought if and when reproducing a Hayate scheme like this.
Image credits: Akeno Ki-84 film stills author collection.
Posted by Straggler 脱走兵 at 12:32

Is there a link to this video on the web? This is one of my favorite aircraft.

You can see a little bit of it here:-

Unfortunately without the song and the scene with the very stirring sound of the engines as a quartet of Akeno Hayate take off together and do a low flypast in formation which is shown in the wartime film!

In the clip at YouTube note the way the pilot bows to the aircraft before boarding.

Hello Nick: Terrific to see your latest post! Please keep them coming and thank you for all the hard work!
Is there a specific date assigend to these Hayate images, presumably 1944-45???
Kind Regards and Best Wishes for a very Merry Christmas and a Festive New Year!

Thank you! And the same to you too.

I don't know the date I'm afraid, maybe late 1944. The quartet of Hayate that take off in the film reveal one in natural metal finish, one in sparse mottle (like the pictures above), one in a very dense mottle and one that appears to be in factory colours with solid upper surface colour and painted under surface.

If I get time I'll try to post more stills here.

There's another YouTube movie With the Hayate song and the engine running-sound in good quality.
The link:http://www.youtube.com/watch?v=FCfKUOj9ojl
After the Hayate movie you will see the Atsugi based J2M.

I reviewed the clip, take a look at the sequence when the Hayates are taking off. There's a whole lot of dust at that airfield!

Could what you're seeing be a layer of dust coating the aircraft, worn away a bit at the wing root and cockpit sill by pilots entering and leaving? An aircraft might be quite dirty after a series of trainees did touch-and-gos on that field!