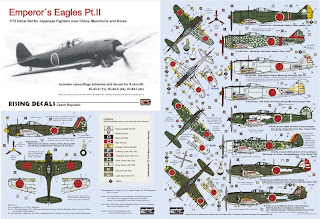 Rising Decals latest foray in a continuing and welcome series of 1/72nd JAAF decals provides for no less than 9 fighter aircraft over China, Manchuria and Korea. The subjects are all excellent choices of individual markings for a single Ki-43 Hayabusa, four Ki-44 Shoki and four Ki-84 Hayate. Please note though that there are only sufficient Hinomaru included on the sheet for one of each type to be modelled. 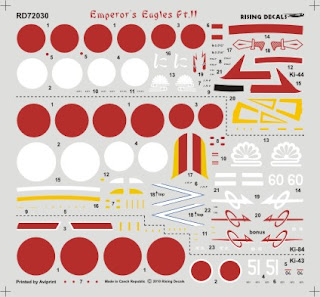 First up is a kikusui (kiku – chrysanthemum and sui – water) adorned Shoki attributed to the 22nd Sentai. This aircraft is based on a single photograph published in the book Pacific War Pictorial #24 by Mainichi Newspaper on 8th November 1943 and has always been assumed to be from the 22nd Sentai because of their use of a similar device as tail insignia. However, the 22nd was not formed until March 1944 and there is little evidence it was ever equipped with the Ki-44. It is possible that the tail device symbolises the pilot's name 'Kikukawa' (chrysanthemum and river) and a recent suggestion from Japan was that the aircraft is actually an early Ki-44 assigned to the 85th Sentai. Indeed a Sgt Kikukawa of the 85th Sentai was subsequently killed in action on 12th February 1944 over Suichwan in China.
This aircraft is suggested to be painted green on the upper surfaces and the photograph does show what appears to be a solid colour. Some early Ki-44 were delivered painted overall in a medium grey (and in the 33rd Sentai mottled with blue-grey) but recently when examining a series of photographs of 9th Sentai Shoki captured by the Nationalist Chinese at the end of the war I noticed that an aircraft photographed from a similar angle, which also appeared to be painted in a solid "grey" colour was clearly revealed to be in oxidised natural metal finish (nmf) in photographs taken from other angles. You pays yer money and you makes yer choice - but have fun.
Next up is a Shoki of the 85th Sentai in an unusual (for that unit) "mesh" pattern in olive green over nmf bearing the tail character "Ni". This aircraft may have been flown by Ohkubo, a wingman to the ace Yokiyushi Wakamatsu, but probably did not have the red fuselage stripe.
The third Shoki is "Asakaze" ("Morning Breeze") one of the earlier Ki-44 aircraft of the 104th Sentai involved in B-29 interceptions over Anshan. This "big sword" adorned aircraft was also the subject of a 1/48th "special edition" Hasegawa Ki-44 kit so the provision of these markings in 1/72nd scale is especially welcome. Several Japanese sources, including Hasegawa, suggest the wingtips and fin tip on this nmf aircraft were painted grey or grey-green. The Hasegawa kit curiously includes decals for these areas which are printed in a colour similar to RAF Sky - a bright pale blue-green - but also suggests painting the rudder and ailerons in GSI Creos 128 grey-green. None of this is convincing. Probably uncoincidentally the 104th painted the wingtips and fin tips of its aircraft in Chutai colours. Rising sensibly suggest a choice between grey and yellow for these areas, the latter being more likely, but another possibility might be a light blue.
The final Ki-44 is a nmf aircraft of the 70th Sentai's 3rd Chutai with an unusual lightning device behind the fuselage Hinomaru. Another excellent choice of markings difficult to achieve in 1/72nd scale without decals.
The first Ki-84 subject is an aircraft of the 22nd Sentai photographed in colour at Kimpo, Korea in August 1945. It is in a heavily weathered and worn dark green finish that will provide plenty of challenge to achieve convincingly in this scale.
The second Ki-84 is a command-stripe adorned machine of the 25th Sentai in an unusual (for Hayate) reticulated camouflage pattern. Again a good choice for Hayate modellers looking for something a little different. The tail stripes have been depicted in various colour combinations (as the original photograph is monochrome) but here yellow and red are suggested, with a yellow fuselage band.
The final two Ki-84 are both from the 104th Sentai and based on Russian photographs taken at the end of the war. These aircraft are in factory painted finish of olive drab over grey-green with various command markings.
The sole Hayabusa on the sheet is an aircraft from the 25th Sentai flown by a 15-victory ace WO Iwataro Hazawa. The camouflage is olive green with a sparse mottle of either red-brown or a darker green and the large white tail number '51' painted parallel to the ground. Hazawa was one of the China-based Sentai's leading aces, receiving a citation from the 5th Air Army's Commanding Officer. He was killed in action over Hankow on 14th January 1945, attempting to bail out from his damaged aircraft which had been caught climbing after take-off.
Rising Decals are to be congratulated on another set of most interesting JAAF subjects.
Image credits: All ©2011 Rising Decals
Posted by Straggler 脱走兵 at 13:59

Thanks Nick, for the notice on this decal sheet.