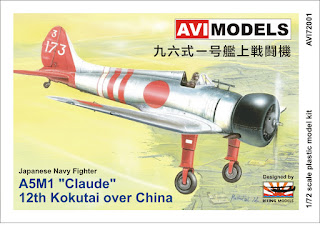 Hat tip to Iskender Mailibayev for kindly alerting me to AVI Models planned release at the end of this month of a 1/72 kit of the Mitsubishi A5M1 to accompany their A5M3. This new kit AVI72001 features markings for three aircraft of the 12th Kokutai over China in natural metal with red tails, but a second release AVI72005 for 13th Kokutai over China will present three camouflaged machines. 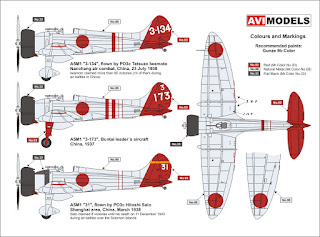 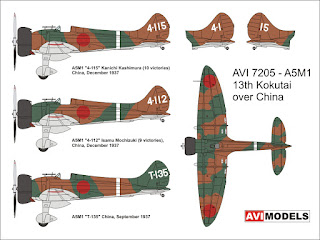 Also planned for release in the same scale are kits AVI72003, an A5M2b Claude with enclosed canopy with three interesting marking options including an aircraft with the canopy removed and a camouflaged machine, AVI72004 an A5M4-K two-seater trainer and AVI72006 an A5M1 of the Yokosuka Kokutai and 12th Kokutai. 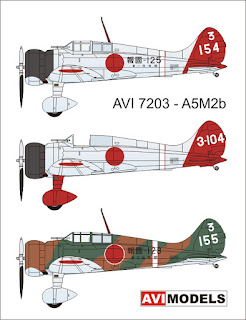 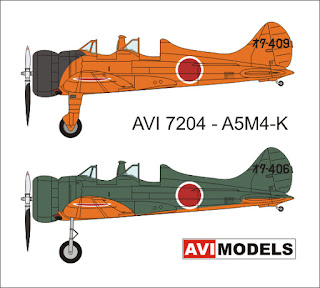 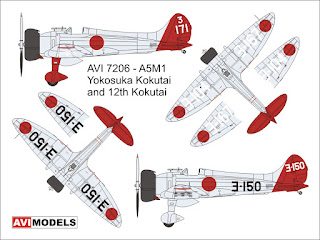 The A5MK (Type 2 Trainer Fighter) was not designed by Mitsubishi but at the 21st Naval Air Arsenal (Dai Nijuni Kaigun Kokusho) located at Omura near Sasebo and known as "Sasebo" which conducted design work based on modifying existing designs. All kits with decals by Rising Decals. Looking forward to these!

I cant wait for all of these new versions of "Mr Claude" come out on the market.

Definitely some unusual a/c that fill a hole in a collection. Wish I had the time to build them all!

I got the AVI72001 A5M1 boxing yesterday. It looks very nice in the box. I will definitely pick up more boxings of this series.