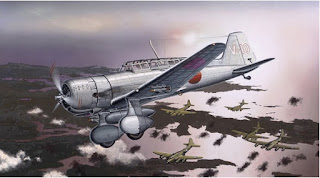 Hat tip to Dan Salamone, who was first, for alerting me to this news, but thanks also to the others who wrote in. Following on from their Claudes, a new tool 'Babs' from Fine Molds in 1/48 scale. From the box art depicting a well-known Tainan-ku rikutei-tai air-to-air bomber, this hopefully first of a Babs family (?) is the IJN Mitsubishi C5M variant, the Type 98 Land-based Reconnaissance Aeroplane (Kyu-Hachi Shiki Rikujoh Teisatsu-ki - 九八式陸上偵察機, abbreviated as Kyu-Hachi Riku-tei - 九八陸偵). The new kit is scheduled for release in July and expect to pay about £20 (US$28) if bought direct from Japan. Hopefully this spad-tastic fad (with a Ki-51 due from Wingsy) might continue for us to eventually see a mainstream Ki-36/55 kit released in the same scale. 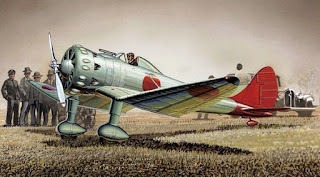 Also due in July from Fine Molds is a mainstream 'modified' kit of Claude's predecessor, the Ka-14 in 1/72 scale, previously released only as a magazine special. This one with a new cowling but hopefully offering both in the kit.

It's wonderful to see a slow, but building, momentum in new tool 1/48 kits of Japanese types. There was a real drought after the Hasegawa Pete a few years back....

Wonderful ! Not another P 51 or 109 ! Hopefully we will see the earlier version with the short chord Townend ring cowling as well .
Would I be asking too much for Asahi Shimbun's " Kamikaze" markings as well ? Thanks Dan and Nick for the heads up .

Thanks for this notice. I hope their 48th scale Ka-14 kit is similarly updated.