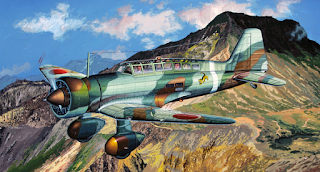 Fine Molds will release three new variants of their splendid 1/48th 'Babs' kit in December this year.  IJA Type 97 Model 1 'Tiger Troop' (above) features the early variant with markings options for two aircraft of Dokuritsu Hiko Dai 18 Chutai and what appears to be an aircraft of Kumagaya Army Aviation School. 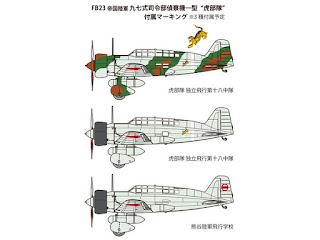 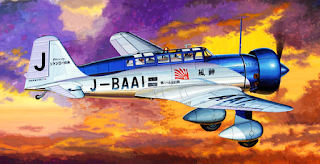 In addition the famous civil 'Kamikaze' record-breaker will be released as a separate kit (above) with two versions of markings (below). 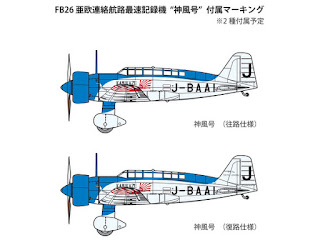 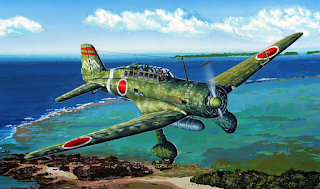 Also, completing the trio,  the IJA Type 97 Model II '8th Squadron' kit (above) with markings for two different aircraft of Hiko Dai 8 Sentai.  Price of these kits direct from Japan will be about £21 each. 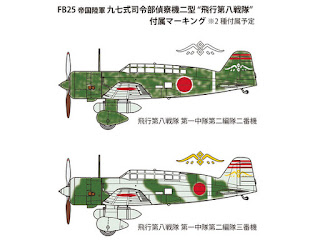 With thanks to Dan Salamone for the heads-up on these releases.

I can't wait to add these kits to my collection.

Great! If I only had enough time to build all these wonderful models...

Well said Michael! There was a strong chance was going to start the C5M2 Babs kit once I finish my current project, now going to wait and decide which version I'd like to build the most.

Thanks Dan for the advance notice..

I am hoping that Mr.Suzuki will release all of these wonderful Type 97 versions in 1/72 someday !

Well Baron, Dan alerted me to the news but I prepared and published the blog entry above.

This is wonderful news indeed . The " Kamikaze" in 1/48 is truly a wish come true for me . I have the current Babs in the stash and these 3 new releases are in my shopping cart at HLJ awaiting availability !

Do we know if Kamikaze and her sister ship were natural metal or silver paint ? I am hoping for the former as I am envisioning a Bare Metal Foil job for this one - any input Nick ?

Thanks to all - Richard

The finish on 'Kamikaze' has always been a bit mysterious but appears similar to that seen on some late carrier-based A5M4. When 'Kamikaze' visited Croydon airport in 1937 the technical writers for 'Flight' and 'Aeroplane' magazines praised the design and construction, noting the "glass-like exterior finish with many layers of clear dope and flush riveting". That suggests natural metal, possibly anodised, but with an aluminium paint type appearance caused by the multiple layers of clear varnish and that is consistent with photos. Bare Metal Foil might be too shiny!

Thanks Nick for the input on " Kamikaze's " finish - this is actually good news because it may solve the decaling issues over Bare Metal Foil.
A clear coat over the foil before and after decals may be just the thing capture the look of the original . Are there any photos extant of
" Kamikaze " in her shrine after her crash but before destruction by Allied bombing ?

Anybody seen this kit yet? Should be a good one!

Thanks for this heads-up, Nick & Dan.