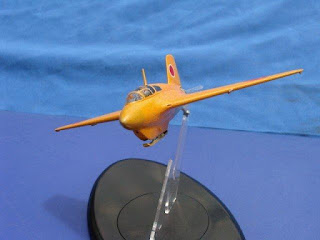 Correspondent Jim Anderson has very kindly shared these images and write-up for his very neat 1/72 prototype Mitsubishi J8M1 Shusui (秋水 - Clear Autumn Water, a poetic term relating to the sound made by a particularly sharp sword as it moves through the air) model. The kit was released by Hasegawa in 1995 with a joint logo for 'NC Models', the latter an enigmatic company apparently responsible for designing the molds. It was subsequently re-released twice by Pit-Road; in 1999 and again in 2004 to represent the restored example in the Mitsubishi museum at their Nagoya factory, with additional white metal parts to represent the blisters over the guns and pilot armour. Now over to Jim:- 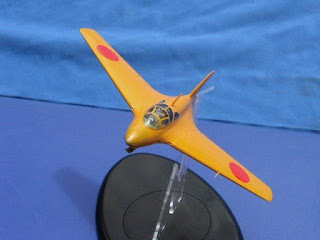 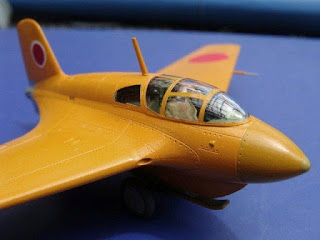 "The kit was built in October of 2006 right out of the box and completed that month.  It was an enjoyable model to assemble being quite simple and small (wingspan 5 inches) with excellent detail.  Box art was worthy of note in that it depicted an abandoned gray green Shusui sitting in some grass.  The package came with a neat rotatable plastic turntable for desktop display.  There were no modifications made, although I should have filled in the two openings in the leading edge of the wing near the fuselage as these are locations for the proposed cannon armed version and not the prototype. 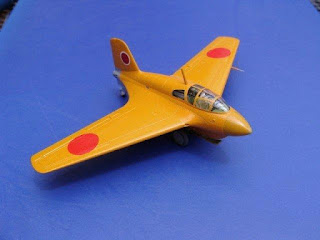 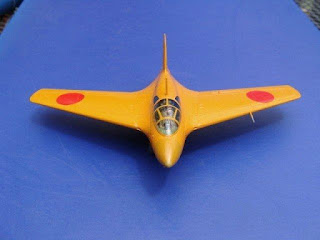 "In terms of painting the interior color was Humbrol Topside Green HT1 (Ed: a Russian Air Force colour in their Authentics range) with about 20% Testors Yellow # 1169 in an attempt to match Mitsubishi interior green.  The kit offers two paint schemes: one a green production version and the other the yellow orange prototype.  Decals for both having the standard six position Hinomaru plus two stencils.  Once assembled the plane received an overall coat of Model Masters Light Gray FS 36495 plus some Testors Gloss White # 1145 in the little 1/4 oz. bottle.  The natural metal area around the exhaust nozzle is Testors Silver # 1146, 1/4 oz.,  thinned with a 50/50 mix of paint thinner and lacquer thinner to prepare it for airbrushing. 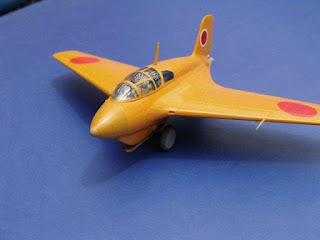 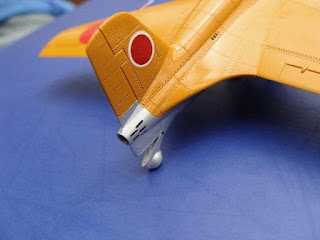 "For reasons still unknown, I wanted to create my own color for this build – something resembling the pumpkin which was in the house for Halloween.  I painted the nosecone with Gunze Semi Gloss Middle Stone H71.  masked off together with the canopy and the exhaust nozzle area in preparation for the overall color coat.  OK, that color ended up being 50% Tamiya Orange X-6, 30% Gunze Gloss Yellow H329 and 20% of the same Gunze Middle Stone H71 all mixed together and airbrushed on, allowing it to dry for a day.  I removed the masking, painted the canopy framework and applied the decals.  The Middle Stone on the nose cone should have been painted over, but I was curious as to how it would compare with the overall color and left it alone.  I don’t think this particular kit is still around but Pit Road offered one that might be the same Hasegawa moulds." 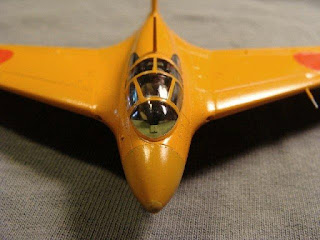 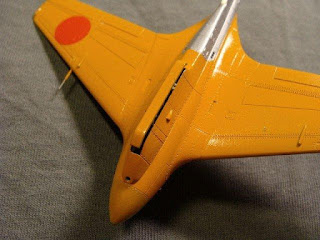 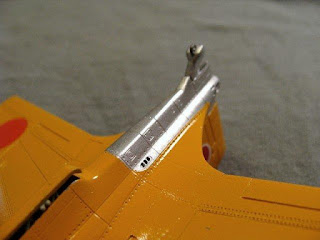 The story of the development of this rocket fighter design is remarkable, with its origin in tail-less glider experiments in Germany in the 1920s. And the development of the Japanese version even more remarkable given the circumstances. Japanese officials had witnessed the Meserchmitt Me163B 'Komet' in flight at Bad Zwischenahn and Rechlin, recognising it as a potential fast-climbing point defence fighter against the B-29. As a consequence negotiations were successfully completed for Mitsubishi Jukogyo K.K. to have the right to manufacture both the aircraft and the Helmut Walther Kiel Kommandogesellschaft HWK 109-509A bi-fuel rocket engine in Japan (as the Toku Ro.2) in collaboration with the IJN Yokosuka aeronautical engineering arsenal. In addition an example of the rocket engine and a complete Me163 were to be provided in return for 20 million Reichsmarks and critical raw materials of tin, copper, molybdenum and rubber required in Germany. 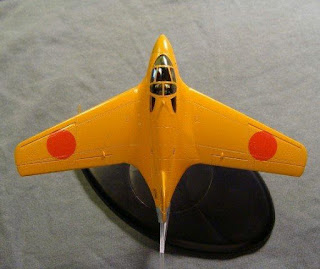 Unfortunately for Japanese plans the various Yanagi submarines carrying these items to Japan were all sunk en route, although it is reported that two sets of blueprints (and possibly other documents relating to the rocket engine and fuel) were successfully delivered.* The Japanese decided to proceed on that basis with a 19-shi specification drafted for both Navy and Army procurement, the latter as the Ki-200. The project was headed by Otsujiro Takahashi of Mitsubishi. A mock-up was completed by September 1944 and with official approval given for production full scale wooden glider versions of Shusui for training pilots were to be manufactured as the MXY8 Akigusa (秋草 - Autumn Grass).  In December 1944 the first MXY8 successfully took to the air in the hands of test pilot Lt Cdr Toyohiko Inusuka from Hyakurigahara airfeld, towed aloft by a Kyushu K10W1 of 312 Ku.  A heavier version of the glider was then constructed with water ballast tanks to better replicate the handling chracteristics of the operational aircraft. Construction of this version was by Maeda Koku K.K for the Navy and Yokoi Koku K.K. for the Army as the Ku 13 Shusui Training Glider. 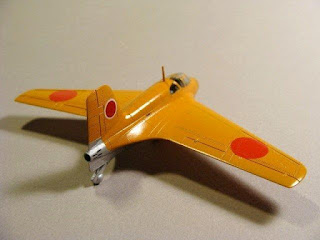 Mitsubishi had completed two J8M1 airframes by the end of the year, fitted with ballast in lieu of the rocket engine and fuel, and these were tested in flight at Hyakurigahara from 8 January 1945, towed aloft by a B6N1 Tenzan.  The rocket engine for the J8M1 was not ready until June 1945 but by July the first full prototype Shusui was ready to fly at Yokosuka under its own power.  On 7 July 1945 Inusuka took the rocket fighter into the air, but at 1,300 feet the engine flamed out and the aircraft crashed with the pilot dying from his injuries the following day. The cause was thought to be the steep climb causing a shift of the hydrogen peroxide fuel to the rear of the fuel tank, cutting of the fuel supply and causing air in the fuel lines.  By the time this was being rectified for the 6th and 7th prototypes Japan had surrendered. 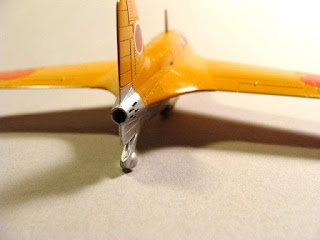 In addition to the Hasegawa/NC Models and Pit Road kits, a 1/72 Shusui kit was also released by MPM in 1995 with an updated follow-up release. Fine Molds have also released 1/48 scale kits of the aircraft. With special thanks to Jim for kindly sharing these images and his write-up with Aviation of Japan.

Very nice, and a great write-up!

Rare and nice model. Thanks for sharing.

That's one model that really looks great on a stand! Beautifully done as usual, Jim.