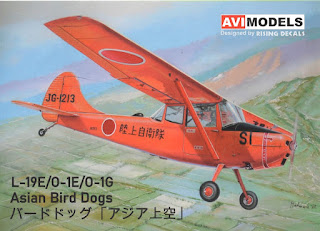 AVI Models have recently released two 1/72 kits of the diminutive Cessna L-19/O-1 Bird Dog liaison and observation aircraft. The release is consistent with their theme of light aircraft models and kit # AVI72019 is presented as 'Asian Bird Dogs' with four colourful markings options. 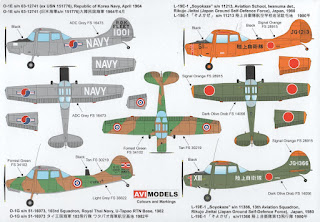 The four options (shown above) are provided for by an excellent decal sheet from Rising Decals and are as follows:- 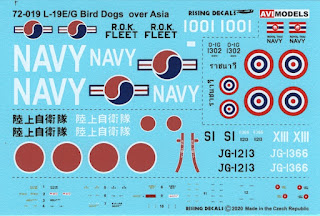 Stencilling is also included on the decal sheet. The variant designations are confusing as they changed over time and service but the AVI instructions include an old vs new designation table to help out. Fuji Heavy Industries also license built the type in Japan where it was named 'Soyokaze' (そよ風 - Zephyr). The only other injection moulded Bird Dog in 1/72 scale is the Airfix kit of 1973 vintage, a product typical of its time which hasn't been seen since 2008 and seems to command high prices second hand. 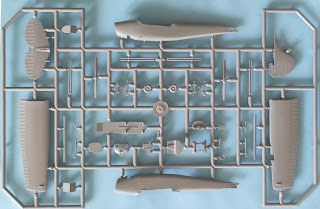 The AVI Models kit consists of a single sprue frame neatly moulded in grey plastic with finely engraved panel detail and raised ribbing on the ailerons, flaps, tailplanes and rudder, especially well executed for the scale, a transparent sprue frame for the canopy parts, a brass photo-etch sheet and a faired ADF loop in resin. The instructions call for some parts not to be used. The cockpit interior plastic parts consist of a floor, rear bulkhead, instrument panel, plus seats and dual controls. The brass photo etch sheet provides instrument panels, rudder pedals, seat belts, internal canopy framing, various panels and grilles, optional control horns for the flaps and alternate parts for the seats, the near scale framework of which may prove challenging to assemble. 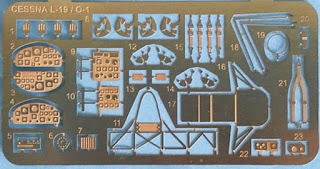 Assembly is fairly conventional with two fuselage halves with moulded internal detail, a separate cowling with alternative propellers and single piece tailplane and fin/rudder which interlock together. The canopy is made up from five transparent parts - windscreen, two side panels, roof and rear - of box construction, which are exceptionally clear but will require care in assembly. The two single piece wings are to be joined with an underlocking tab to the canopy roof and again care will be needed.    Finally there are the wing struts, undercarriage legs, wheels and tail wheel. All in all a neat little kit of a popular type which will require care and nimble fingers to make the most of.
With special thanks to Mirek of Rising Decals for the review sample.
Image credit:- All © 2021 AVI Models & Rising Decals

A very nice !/72 addition of such storied and successful aircraft

Thanks for the notice on this kit, Mirik & Nick.