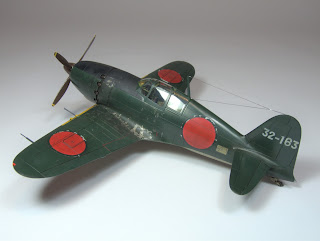 Following up on the Rising Decals Raiden sheet it is a real pleasure to share these images of Woody Kubacki's superb 1/48 models of Mitsubishi Raiden, built from the Hasegawa kits. First up is his J2M3 Raiden of 332 Ku. Woody provided details of his project as follows:-

'The cockpit was detailed with additional wire and levers and the radio was scratchbuilt as I believe that the kit radio was far too small. 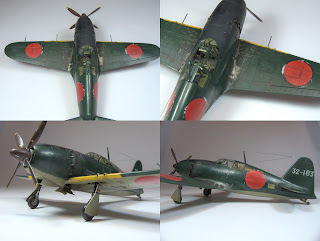 'The kit went together fairly well, with most of the filling and sanding required to fit the upper decking to the fuselage (there is a seam most leave but it has to be filled) and the front cowl. I decided to rivet the entire plane and designed templates for each line, cutting them out on my Cameo 4 cutter. The model was primed in Gunze Mr.Finishing Surfacer 1500 Black, selected areas were sprayed with Mr Color C8 silver, and then hairspray to represent chipping, black base and top coat. The masks for the markings were also designed and cut on my Cameo 4, leaving only three decals to apply. 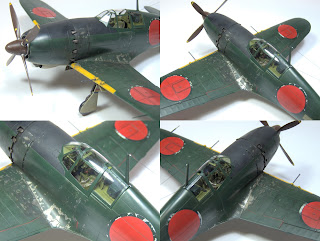 'The model represents an aircraft from the 332 Kokutai sometime in 1945. I don't know much about the history of the plane or who flew it, but I do have one photo of it, with two pilots (clearly friends) in front of it. Actually, their comraderie and anonymity is what drew me to this particular aircraft. 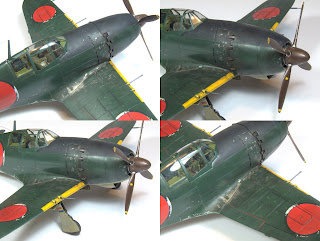 'The model was painted with AK Real Colors (Mitsubishi interior colour, D2, Olive grey (mixed with 10% white) and Mr Color paints then weathered with various oils.  During my research for this build, I noticed that despite many Raiden having chipped or flaking paint, the overall finish was fairly glossy, and that is what I attempted to achieve.' 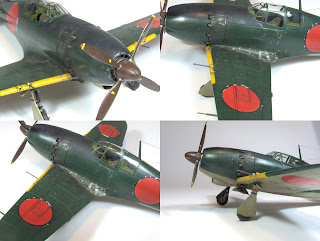 Woody's attention to detail is very impressive, based on his extensive and careful study of photographs and film. Close examination of the model photos will repay appreciation for his work (click on the images and then re-open them in a new tab or screen to enlarge them to full size).

332 Ku was established in August 1944 under Cdr Takeo Shibata for the air defence of the Kure area, Japan with a mixed complement of Zero fighters, Raiden and Gekko night fighters. A Zero contingent under Ltjg Susumu Takeda departed to the Philippines in November of that year and in Japan the unit also became responsible for defending the Hanshin area, a detachment of Zeros and Raiden moving to Naruo whilst the Gekko contingent moved to Itami. On 22 December 1944 CPO Akeshi Ochi claimed the the first B-29 of the unit flying Raiden 32-101 and was presented with a bottle of whisky by Cdr Shibata. In February 1945 Cdr Katsutoshi Yagi took command of the unit.

When the B-29 force began bombing Kyushu during the Okinawa campaign 17 Raiden of the unit under the command of Lt Kohei Nakajima moved to Kanoya to form a combined air defence force with 20 Raiden of 302 Ku under Lt Susumu Itoh and 7 Raiden of 352 Ku under Lt Yoshihiro Aoki as the Tatsumaki (竜巻 - Tornado) group, operating from the end of April to 12 May 1945. Subsequently the unit was re-organised with a planned strength of 48 Raiden and 24 Gekko. Ensign Susumu Ishihara was a notable veteran pilot who served in 332 Ku from its establishment until war's end flying both Zero and Raiden against the B-29 with officially recognised claims for 16 victories (including previous claims with Tainan, 582, 204 and 202 Ku) but was reputed to have achieved more than 30 in total.

With special thanks to Woody for sharing these images of his superbly convincing Raiden model.

Woody, I've seldom if ever seen a quarter-scale Raiden I liked so much. Everything works together on this one. The finish is quite convincing! Thanks to Woody and Nick for sharing it.

An excellent model throughout! This is a great example that thorough research and analysis of the subject renders a far more credible model. Bravo Woody!

The weathering on this particular plane was speculative, but I did try to combine things that I saw on operational planes. The two NHK news reels specifically on the Raiden definitively helped. Glad you like it

Brilliant in every aspect imaginable!