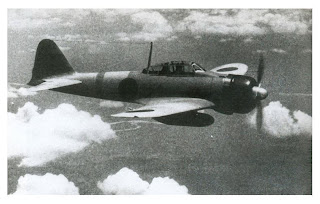 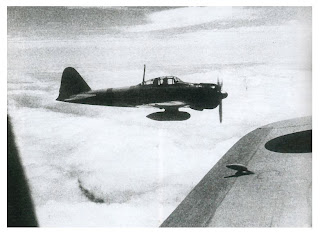 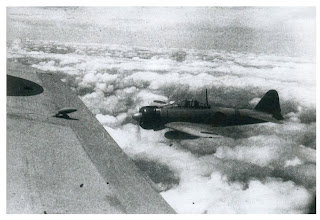 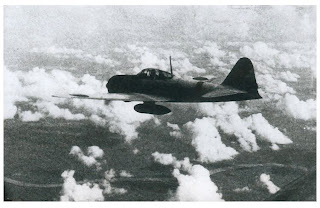 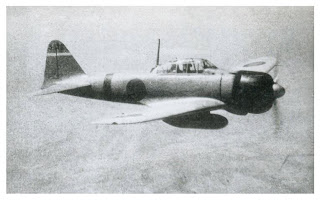 The most recent explanation for the two tone appearance in  some photographs of the early Type 0 Carrier Fighters over China is that tarpaulins laid over the cockpit area against heat protected the paint in that area from sun fading.
Here are a selection of photographs showing the phenomenon (click on the pics for the full size views). In the lowest photograph the difference in appearance is not so noticeable and the demarcation line is to the rear of the fuselage hinomaru, perhaps lending credence to the tarpaulin explanation.
Note the dark appearance of the ailerons on the Type 0 in the foreground of two of the photographs. In one of these a patch of the dark colour appears to extend onto the trailing edge of the wing.
Interestingly artist Kunihiko Hisa makes no concession to the two tone China Type 0 Carrier Fighters in his 'Zero Fighter 1940-1945' (sic) cartoon album. In their 1/72nd scale kit of the 'Mitsubishi A6M2a Zero Fighter Type 11' (sic) (AP 13) Hasegawa suggest painting the darker area (which includes the whole lower wing surfaces but curiously not the tail or any part of the upper wing surfaces) with a 75%/25% mix of  Gunze H61 IJN Gray and H 82 Dark Gray, whilst the remainder is to be painted H61. The photographs clearly show that the dark area extends to an area outboard of the wing roots but the demarcation is less sharp than on the fuselage.
Images credit: Saburo Sakai via Straggler
Posted by Straggler 脱走兵 at 12:31

Nick,
Thank you so much for taking the time to scan and post these photos. This puts them in a larger format than I had previouslly available. Also, the two that show the ailerons in the foreground are very useful and will aid me as well in my pursuit of this unique finish/color scheme for early Zero fighters.