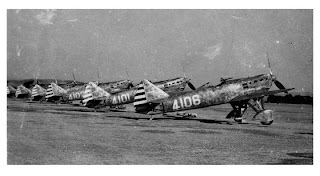 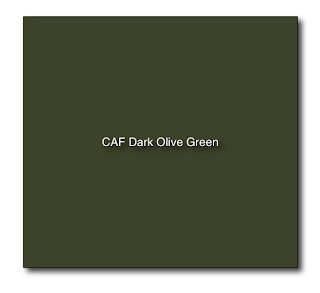 A superb photograph of French Dewoitine D.510 in  Republic of China Air Force (ROCAF) service. This line-up shows the Dewoitine aircraft at the time they were operated by a French volunteer squadron. The camouflage pattern may be seen to good advantage and appears to be dark green dapple over silver dope/natural metal finish. After examining many photographs of the Chinese Dewoitines I still cannot make up my mind whether there is a second base colour under the dark green mottle or it is just the effect of overspray!  Even the prop blades were mottled.
Some accounts claim that the Dewoitines were only used as fighter trainers by the Chinese. In fact, after the French had departed, the surviving Dewoitines were deployed by the Chinese 17th Chung tui (approx. squadron). On 4th November 1939 they were part of a force that intercepted formations of Imperial Japanese Navy G3M bombers attacking Chengtu.  Captain Shen Tse-Liu in aircraft '5921', leading the 17th's Dewoitines, attacked the G3M of 13th Ku commander Captain Okuda in a head on pass, using the 20mm cannon to set fire to the Japanese bomber and destroying it.
The Chinese had discovered that if fired in a dive the spring tension of the drum magazine of the Hispano HS-9 cannon was not strong enough to feed rounds into the breech of the gun, resulting in stoppages. They therefore made straight and level attacking passes on the bombers.
After the head on pass Captain Shen made further attacks against the rear of the Japanese formation but his aircraft was damaged by return fire, resulting in a forced landing in which he was injured.  Dewoitine '5924' flown by Lieutenant Chen Kwei-min was also damaged by return fore but landed safely.
The Chinese Dewoitines do not appear to have been equipped with wing armament.
Image credit: Albert Lee Wong via "CAF-Flyboy"
Posted by Straggler 脱走兵 at 17:45

Thanks for the photo, color swatch and comments, Nick.

I found your blog by mere chance and I am very glad that I did! Congratulations and please keep up the nice job.

The Chinese Dewoitines are a fascinating research subject on their own. Their designation was D.510C (“C” stands for “Chine”).

The contract between the Chinese Nationalist government and OFEMA(Office Français d’Exportation de Matériel Aéronautique) was signed on August 3rd, 1937. The 24 aircraft actually delivered to the Chinese were drawn from two D.510 batches being built for the Armée de l’Air, as the manufacturer was asked to deliver them as fast as possible (the French Air Ministry accepted to reduce two of their own orders placed a few months before so that LeO-SAF could fulfil the Chinese request). The machines were delivered to the Chinese in two batches of 6 and 18, the later only reaching the Far East in 1939.

The sole difference between the D.510C and their brethren used by the French AF concerned the armament. While the later had two underwing-mounted 7,5mm MAC Mle.34, with only the bulky 300 rounds’ ammo drum buried in the wing, the former had two belt-fed Darne machine-guns fitted inside the wing (as in some French D.501). This can only be seen in close-up photos: the gun barrel was barely visible, just atop the leading edge. The D.500 was the only aircraft in the family with synchronised machine-guns (Vickers), mounted just behind the engine. It should be noted that the D.510 could be fitted on demand with Darne, Colt or Browning machine-guns.

Interestingly, the Chinese interest in the French monoplane fighter dates back from two years earlier. The original specifications demanded by the Military Government of the Kwangtung province in July 1935 called for a D.500 version (of which 20 were to be ordered) armed with a 13,2mm Hotchkiss heavy machine-gun firing through the propeller’s hub and two 7,92mm machine-guns in the wings. LeO couldn’t accept the order on technical and financial grounds. This piece of information on the "pre-history" of the D.510C was published in the Eighties by Raymond Danel and Jean Cuny in their monumental work "Les Avions Dewoitine" (strangely enough, no mention is made about it in a recent article on the Chinese Dewoitines).

The list of countries that showed interest on the D.500/501/510 is large. A few even bought single examples or very small quantities for testing purposes. These included the USSR and, interestingly, Japan (2 D.510J).

Thank you very much indeed for posting this comment with the valuable additional information about the D.510C!

Thanks for your kind words.
An afterthought: the D.510C were almost certainly delivered with wing-mounted Darne machine-guns in the then standard 7,5mm French rifle calibre (7,5x54), which should have posed some supply problems to the Chinese, who used 7,92 (7,92x57 Mauser) in a more or less standardised way then.

P.S. Must take a look at the Danel/Cuny tome, because I think they also mention the results of the test conducted by the Japanese with their D.510J.

Randomly stumbled upon this post while researching my grandfather's personal aerial history.

He flew with the 17th pursuit squadron in the ROCAF and piloted a wide variety of planes including: I-15, I-16, Curtiss Hawk III and one of the Dewoitine D.510C's while in Kunming.

I still have a picture of him standing in front of the propeller of his D.510C.

Thanks for providing additional information - I'm trying to piece his experiences together from his anecdotes and what little I can find online.