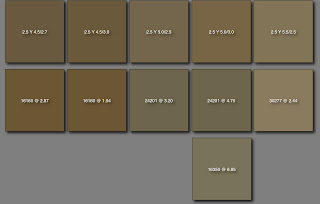 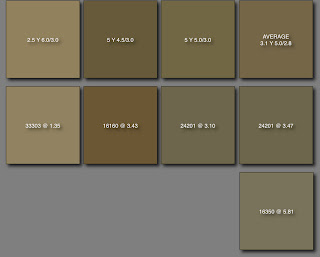 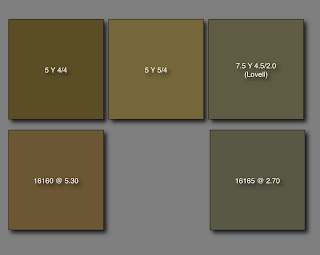 Japanese aviation researcher Jim Lansdale has published an exacting and revealing examination of Aichi D3A1 dive bomber casualties at Pearl Harbor at j-aircraft.com including measured Munsell colour values from extant aircraft artifacts.
The Munsell values as listed in the article are rendered above with the closest FS595b comparison value shown beneath each chip together with its DE2000 difference calculation. A calculation of 2.0 or less equals a close match. In two examples where the closest FS equivalents are poor matches I have included a comparison to 16350 but it is not the closest match.
The first two plates show the variegated Munsell values taken from a single artifact together with the calculated average (9th chip). The third plate shows the two Munsell values cited from a visual assessment of a metal fragment from the same aircraft by Robert C Mikesh - the original colour said to lie between the two. The last value is from another metal artifact.
As far as modelling paints go, and without going into complex mixes but allowing for scale effects, here are a few starters:
Vallejo 71023 Camouflage Beige 'Hemp' is already in the ballpark, but may require a little lightening for "scale effect".
Polly Scale F414317 or F110082 'Concrete' are also in the ballpark, but a little lighter and greyer.
An approximate Gunze (GSI Creos) mix would be 50% H70 'RLM02 Grau' and 50% H336 'Hemp'.
For their 1997 1/48th scale D3A1 kit, Hasegawa suggest the following Mr Color mix: 50% #55 'Khaki' + 30% #13 'Neutral Grey' + 10% #4 'Yellow' + 10% #1 'White'
For Humbrol try adding 62 Matt 'Leather' to 40 Gloss 'Pale Grey' in a 2:8 ratio.
White Ensign Models Colourcoats ACJ17 'Nakajima Amber Grey (Ame-iro)' is a little too strong and yellow, whilst ACJ16 'Mitsubishi Grey-Green' is closer but a tad too grey. Somewhere in between these two maybe?
Revell Silk-Matt 362 'Schilfgrün' (Reed Green/RAL 6013) is perhaps a little too green but comes very close to the appearance of the Lovell sample when dry. The green of this Revell colour is subtle and only becomes apparent in juxtaposition to the browner hues.
Greg Springer has also posted a precise Testors Model Master mix for Munsell 2.5 Y 5/3 at j-aircraft.com
Many thanks as always to Ken Glass for providing the fractional Munsell notations and to Jim Lansdale for sharing the data with us.
Image credit: Rendered colour chips © Straggler 2008
Posted by Straggler 脱走兵 at 22:39

Hi Nick,
It is exactly this sort of research and posts that illuminate and clarify for everybody involved. Thanks to yourself, Ken, and Jim for all the hard work....
Dan

Huuh- total of 25 chips! So which one to use? But hope that model paint manufacturers has do its job good about this colors.

Hi Srecko! Please refer carefully to the original article at j-aircraft.com! The first 8 Munsell values are taken from the variegated appearance of a single artifact and the 9th is the "average" value.

The 10th & 11th Munsell values (5 Y 4/4 and 5 Y 5/4) were visually assessed from one metal fragment by Robert C Mikesh, who drew the conclusion that the original colour was somewhere between the two values.

The 12th Munsell value is from a separate metal fragment and provides a much greener appearance.

Beneath each of these values is the closest FS 595b equivalent match but the DE2000 calculations quantify how useful these are. In most cases a calculation of 2 or less will give a reasonable impression of the original colour. Between 2 and 4 the comparison can only be considered approximate. Above 4 and the comparison is not very helpful. They are included only to quantify how close (or not) the FS comparisons are. It would be unwise for hobby paint manufacturers to base the colour of the paint on the FS 595b values, however close they may seem.

No-one said it is easy :-) One has to look beyond the multiple chips to envisage the characteristic of the colour, bearing in mind the probability that however well preserved the paint would have ambered or "yellowed" slightly with age.

In this way excellent work and amazing amount of the available data sorted, analyzed and presented. And as you know this is not easy job.