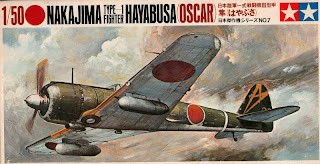 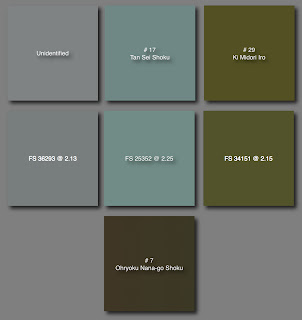 The splendid box art for the 1964 Tamiya 1/50th scale Ki-43 III Ko depicting an aircraft of the 48th Sentai over China, is ambiguous in appearing to show a slightly olive green version of ohryoku 7 go shoku with natural metal undersurfaces. The instructions, however, are interesting in that they suggest that the upper surfaces were "brown (just like olive drab)" and that the under surfaces were "The same as that for upper surfaces excepting that it has been lightened with white."  This description exactly conforms to the recollections of Mr Shimoune.

Although the study is ongoing the following paint colours have been identified as being applied to JAAF drop tanks:-

1. An unidentified neutral grey - for which the closest FS value is 36293 @ 2.13 (it is slightly too blue). This appears to be the colour of the drop tanks on the aircraft in the colour photograph posted below.

4. The olive drab #7 'Ohryoku nana-go shoku' - also used for top surface camouflage and interiors, the approximate FS equivalents to which are 33070/34088. The swatch included above is gradiated from left to right to show the brown to green ends of the colour range for this paint.

5. Yellow - which is presumed to be the standard orange yellow in use for IFF strips and trainers (q.v. Army Trainers) although a Ki-84 Hayate tank is cited to be in a yellow colour of approx FS 33655 to 33538.

Great posting. The embedded link to (q.v. Army Trainers) under item 5. Yellow... does not work for me.

Thanks! Should work now OK.

I couldn't resist posting some color notes from another Tamiya kit of that day, the Saiun (C6N1 "Myrt"). "Slightly emphasize the difference of the brighter Pilot Seat Floor and darker Reconnoiter and Radio Operator Seat's Floors with matting grey color." When building my Hasegawa Myrt, I used that suggestion; it might be a good bet for Jill and Kate, Nakajima stablemates. Obviously that vivid memory came from somewhere.

If you think about it, Tamiya's painting instructions have a great track record re paint callouts. Just because a kit is old doesn't mean its color info is necessarily passe.

An English text insert in Model Art #533 cites # 17 'Tan Sei Shoku' as a top side camouflage color for some late war Type 100 Helen bombers. I have seen a color photo of one posted somewhere in the last few years.