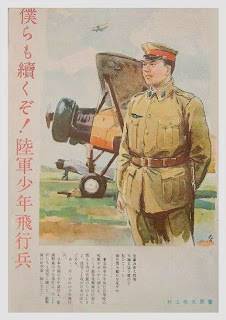 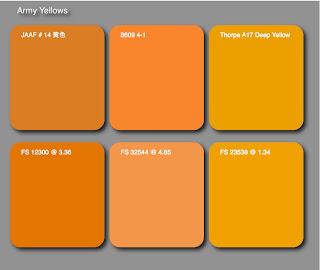 An interesting piece of contemporary watercolour art depicting a novice pilot with two Army trainers in the background. This type of art is sometimes useful in giving a good impression of colours as seen by an artist's eye.


Note the dull shade of deep yellow on the biplane (it is not a reddish orange) and the slight bronzing effect where the black engine panels behind the cowling have been affected by heat. A convincing detail.


The Ki-55 'Ida' in the background is depicted as grey and the grey does appear similar in appearance to the greys seen in a colour photograph of an 'Ida' airfield line-up. It is a neutral, slightly dove grey. Ki-36 aircraft taken over by Indonesian forces were described in notes made by a British eyewitness at the time as being painted light blue-grey with a dark green mottled camouflage.


For comparison purposes the colour swatches show, from left to right, JAAF paint standard # 14 Ki iro (yellow colour), February 1945 Joint Army-Navy paint standard 4-1 and Thorpe Army colour A17 'Deep Yellow'. Beneath each chip is shown the closest FS 595b match with the DE2000 difference calculation (2.0 or less = a close match).
Thanks to Ken Glass for sharing this image.
Posted by Straggler 脱走兵 at 13:59

very interesting painting. However, I have a slightly different interpretation of it. Rather than heat causing bronzing of black panels behind the engine I would consider the possibility that the panels are actually brown. FWIW, this is the way they are depicted in the profiles in F.A.O.T.W No.73 on the Army Type 95 Trainer.

Again, to my eyes the yellow looks quite orange but then I don't have a properly calibrated monitor so I may not be seeing a true representation of the colours.

Thanks for the comment. Yes, I was aware of the FAOW profiles and also of interest may be the fact that the Fujimi kit of the Ki-55 advises painting the cowling and undercarriage fairings in "cocoa brown". It looks beautiful that way.

I'm just not sure whether the "brown" was intended or just the degradation of the black paint due to heat. Without going into too many technicalities about black pigments the "heat bronzing" effect which can give some cured black paints a slight purplish brown reflection is well known. In this case the cowling appears black and one could also ask the question why the difference?

When does yellow become orange? One of the perennial colour questions and very dependent upon colour perception! To be fair I drew the distinction to "reddish orange" rather than orange per se. Certainly in Methuen terms the original is deep yellow (4A8) rather than deep orange (5A8). The reddish oranges some modellers like to use on Japanese trainers are more towards 7A8 or even 8A8.

In considering the likely colours there are also the paint swatches from the JAAF standards. # 14 Ki iro (yellow colour) is a deep orange yellow similar to Thorpe's A17 Deep Yellow and not dissimilar to the yellow in the painting or the yellow as it appears in some colour photographs.

Often the modelling conventions follow other models or the artistic representations in publications like the FAOW series. It is sometimes useful to break free from these and consider other evidence, such as the paint standards and contemporaneous paintings like this one.

I'll try to post some colour swatches with this image as a "control and comparison" aid.

It might be a useful comparison to post that color photo of the airfield scene of Idas with other biplane trainers that you spoke of.

Hi Nick,
FWIW on my work monitor the artwork looks like the middle paint chip you posted....the Thorpe color is what I would associate with the "yellow" wing IFF, and the JAAF #14 for Ki iro the "classic" trainer color, also similar to what has been seen in Arawasi magazine.

Thanks as always for posting these....
Dan

I think that "Milwaukee Road Orange" in the Polly Scale Model Railroad Acrylics Range is a nice approximation of the sandy orange yellow for Japanese trainers and (sometimes) prototypes. It has a built-in scale effect too. I'm going to try it on a 1/144 Platz George and see. I appears to be somewhere between FS12300 as shown above and 12473, and is not the darker true orange.

I remember another that might have been called "Utility Orange" in the Floquil / Polly Scale range that was also a nice starting point...

Anyone tried these and if so what did you think?.

Hello,
I would like to inquire about the Thorpe Colour Table but your email address in the link does not seem to work.
I am also interested in the modeller's guide to Colour Schemes & Camouflage of the type 1 fighter -Hayabusa

can you make the link work?

Picking up where Tim Tam left off in the first comment above,

'ARAWASI International'Autumn 2008 issue 10, pages 14 through 18 lists in detail the specs for the painting of the IJN K5Y1 "Willow" biplane trainer. Page 17 lists its Townend ring and cooling shutters as specified in reddish brown primer with a black top coat. All metal engine cover panels and all fuselage metal panels were to be given a reddish brown primer coat, whether fabricated from light metals or steel.

Perhaps the 'bronzing effect' mentioned by Nick above is in-service wear and tear and/or degredation due to heat damage of the black top coat, allowing the reddish brown primer to show through. Or perhaps images with their forward cowling areas in a maroon shade depict a plane in an incomplete state of being painted out to specs.

While not the best photo, wikipedia has a photo of a US/South Korean hack that has been overpainted, but you can see some hints of Orange underneath some chipping in spots.

Personally, I found the Milwaukie Orange railroad color to be a bit too orange.