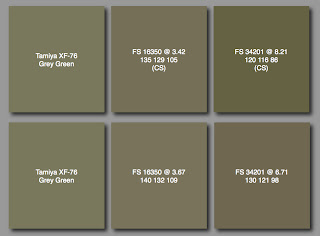 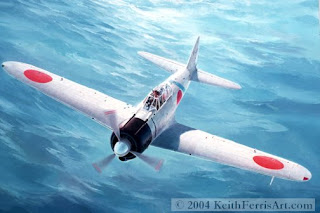 Wow! this conversation is getting better and better! If one thinks about the Zero as probably one the most produced if not THE most produced a/c of the Japanese nation during WW2, a few things have to be taken into account.
Just for Zero production how many thousands of gallons of exterior camouflage paint must have been produced? By how many different manufacturers? Certainly there can not be one color which in hue, value and chroma can be considered "The Color" even if a swatch of it was locked up in a safe somewhere. With all the different manufactures, forced substitutions of raw materials, differnt application techniques by differntly skilled workers there has to be a wide variation in the color family of the SAME color. Given an color range for a certain color say "J-3" there had to be differences as one moved along a color scale from left to right but they were all J-3 according to the paint manufactures. I bet not too many liters of paint were refused during wartime production for being the "wrong" color.
Now 60+ years later given the enviormental, aging and the fact that the original materials and production methods are lost to time there are aspects to color questions that we may NEVER know.
I think our paint researchers (bless you all!) have given us an acceptable color with range of hue, values and chromas which pretty well get us into the ball park. Even if an unopened container of IJN paint was found ( some containers of "wet" RLM paint stock were recently discovered in the Czech republic)who would trust the color that came out of the container as being The Color? Too many variables,to nail down but the quest goes on all to our benefit.....