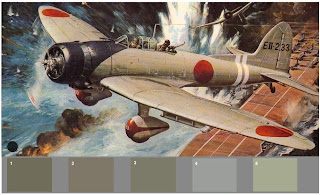 Olive-gray's decendent 30 years later: In the late 70's the USAF developed some camouflage colors for the A-10A attack aircraft called Reflecting Mask 10A. There were 2 or 3 paints issued under this designation. I don't believe, but am NOT positive, that FS standards for the Mask 10A paints were issued as the paints had a pronounced color shift in different lighting conditions. Also the paint showed an unhealthy tendency to to turn chalky with prolonged exposure to the elements. So this color shift under different lighting was still around in certain paints almost 40 years later, in spite of all the paint technology advances!
As far as the "2" colors of the single color Val: The serial number is known so I would assume the date of manufacture is also known. The date the a/c was shot down is also known. Would it be possible to exprapolate the amount of time that the a/c was in service to form a theory as to how long the (assumption) single overall color took to change on the top surface due to enviornmental exposure? OR is it possible the a/c was partially repainted? Isn't there a thought that some Zeros which were thought to be painted in 2 colors may possibly have had tarp covers placed over the center sections of the a/c to protect them from the elements thus leading to differential weathering?
I found it interesting looking at the photos (assuming my monitor resolution is up to speed!) of the varigation in the appearance of the paint just on one rather small area of the wingtip. I can see why paint measured at another point on the airframe would have a differnt value.
BTW kudos to the "Black Ops" crew to get the a/c relic out in the sunlight for a color measurment!

In all probability the upper surfaces were subjected to UV and light fading during that time but the undersurfaces would not have been immune from thermal ageing either. Bear in mind the paradox that the exposure would have faded the paint and then subsequent ageing would tend to darken it. If during this time the artifact was exposed to light, even museum lighting, then the fading would continue too. It is tempting to view these paradoxical processes as cancelling out the opposite effects but it doesn't actually work like that and is difficult to calculate exactly.

Also please bear in mind that the full provenance of the piece is unknown. We don't know if all the paint surfaces are factory original or had been subject to repair, stripping, re-painting, etc. An unlikely probability but a possibility nonetheless.

From the close-up photograph the paint surface appears to be very well preserved with minimal "chalking". It was probably well cared for during the 3.5 months prior to its demise. Think in terms of cars and the difference between one that is regularly wiped over and put away and one that has been left out and not touched.

I spoke recently to two paint experts about this subject, one a colour scientist and the other a paint/coatings chemist. Although they were both very sceptical that the extant paint samples would now have any value in determining the original colour my own feeling is still that the colour shifts have been quite subtle - micro if you will.

If I were to apply original paint to a piece of metal and show it to you, then you went and looked at the extant artifact I think you might struggle to discern any difference. However, if I applied the original paint directly to the artifact it would be a different story and the exposure/age related changes would become much more apparent.

As a modeller I think it is quite legitimate to interpret the probabilities and possibilities in an individual way, provided one is cognisant of all the known facts. In that sense the colour chosen can never be "wrong". I might still paint a Zero whiteish-grey and say "this model represents the perception of the appearance of the Zero in popular media up until the turn of the century" and point to at least one colour photograph in doing so. A specific model by its chosen colouring may "convince" depending on the image already created in the mind of the particular viewer. It is almost impossible to separate preference - or prejudice - from the perception of colour.

Nick, I have to agree, an a/c 3.5 months old would be considered "factory fresh" and probably would not have had any major paint work done in that short span of time.
You make an interesting point about paint aging. Trying to spot touch up small stone chips on a well cared car using the "factory color" which looks and is supposed to be identical to the original paint looks the same except when you apply it to the repair it never gives you a perfect match ( at least for me!) no matter how careful you are in the application.
From all you and other investigators have said on this blog it appears that even with original paint samples that have been well cared for and kept in a safe it appears that paint is like humans we start to age from the day we are born....I guess we have to look at the colors samples and /or artifacts and say: This is what the color looks like today after 65 -70 years, but we must be prepared to accept the fact that the original color as applied was different (perhaps subtle, perhaps not depending on how it was cared for, exposure, etc.) but still different none the less.
Again my compliments on your site, there is a lot to be learned here with information that I've never seen anywhere else and it is very well presented. Best, Pat

Thanks for taking time to present all this discussion. I don't have a copy of the Bandai 1/50th scale Aichi D3A1 kit box art. What is your estimate of the D3A1 color in it?

Thanks for the quick reply.

Well, of course, I would have to find this after, finishing a Fujimi D3A1 last Thursday...

I painted it Tamiya XF-12 IJN Grey, which is a greenish grey - at least it isn't whitish grey.

I'm just starting a 1/72nd Hasegawa A6M5, Nakajima-built, and plan to do the top surfaces Tamiya XF-70, which I understand was specifically made for the Tamiya 1/32nd A6M5 kit, and the undersurfaces in Tamiya XF-49, which is equal to FS 4201. Hopefully it should look OK.

Seriously, this is a wonderful site, and I've learned a lot about a subject that's very interesting to me, but at which I'm hardly any expert.