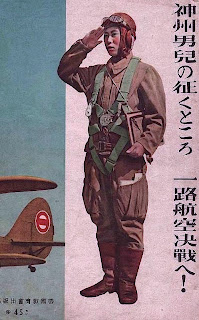 The JAAF paint colour standards included only two "pure" blues. Blue # 13 (Ao iro 青色) was a dark blue that might be described as a navy blue colour. Sky Blue # 34 (Sora iro  空色) was a cobalt blue associated with the light blue JAAF arm of service colour. It is probable that the latter colour was used most frequently for command and chutai markings. It can be recognised in many descriptions and depictions of Japanese Army aircraft, frequently described as "cobalt blue" (kobarutoburu - コバルトブルー) or simply "light blue" (淡青色) But contemporaneous use of the generic term "blue" implies that a certain level of misinterpretation or misunderstanding could and did apply to the application of these colours in practice. 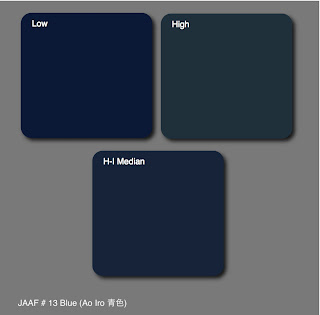 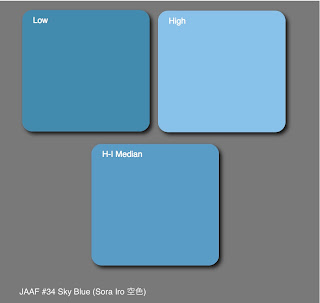 The JAAF paint colour standards documented their acceptable colour values (for acceptance testing of contractor supplied paints) using the Hess-Ives colour scale. Equipment was available to facilitate this but it also depended on a visual comparison by the operator to assess whether the paint sample was deemed to match the acceptable colour values. The Hess-Ives system combines the weighted chromas which represent the red, green and blue shares of the transmission spectrum of a measured sample at three wavelengths into one single value. The interesting aspect of these values, which were officially documented for each colour in the standard and still exist, is the considerable range of variance permitted for each, probably in recognition of the limitations of the localised Japanese paint industry in supplying paint to the Army and aircraft manufacturers but also perhaps in recognition of the impermanence of many paint colours in field conditions. This was commented upon at the time and will be explored again in respect to specific aircraft types.

Again it is important here to emphasise the difference between a paint colour standard, which sets out the parameters of the colour the paint was intended to match, and the actual paint. Apart from the tolerated variance built into the acceptance system, what happened to the paint after it had been applied, in terms of weathering, degradation and external impacts cannot be quantified for each and every aircraft. The paint colour standard, therefore, serves only to provide a visual understanding of the intended or ideal colour. In this field of research and interest it still performs a valuable function, because it can fill gaps in the limited knowledge derived from extant samples, help to reconcile apparent anomalies in wide variations of extant paint colour and serves as a benchmark to be confidently adapted in the absence of any other specific data.
Blue paints applied in field conditions might not always have been procured to the official standards even though they might have been matched expediently to them as the closest available alternative. Units might have resorted to mixing available paints to obtain those required, using blue and white for example. The JAAF Sky blue standard is approximately consistent with the Thorpe colour A23 Medium Blue also shown here. 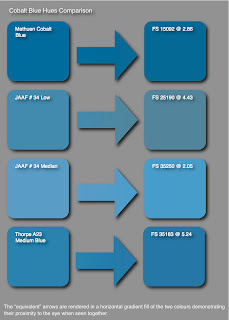 The chips for these colour standards have been rendered by converting the original Hess-Ives values back into RGB using a proven formula. The colours can be viewed about as closely to how the original JAAF acceptance operatives saw them as it is possible to get. The table above shows the closest FS 595B equivalents to the Methuen, JAAF and Thorpe cobalt blues.

Here are the closest calculated FS 595B values where a difference of 2.0 or less equals a close match:-

Thank you for your blog. It is good to see the type of colorimeteric comparisons that add some life to the range and appearance of these colors, rather than just the numerical values. I especially like when you post FS chips alongside the true color -- it helps get an 'aim off' from the most readily available color chart.

In this case, I also want to suggest that Humbrol also has #89 'Middle Blue' in this sky-blue range of colors - without my painted chips I am not sure, but it does appear to match the mid value of the JAAF #34 Sora Iro.

I also find that simple mixes of Testors Model Master "French Blue" or square bottle sky blue with white will get into the "high" color 35450-35466 range. Humbrol's #14 "French Blue" is darker than Testors, somewhat more similar to your cobalt blue ranges, and does not tint to the same sky blue range.

Thank you Mark. I shall bear in mind to add the FS comparison chips in future and may retrospectively add them here.

A good point about Humbrol 89 too - you are quite correct. Anther useful Humbrol cobalt blue is 48 Gloss Mediterranean Blue which gets towards Thorpe's A23 Medium Blue.

Thanks for the paint mixing tips Mark. Thanks Nick for another informative posting.