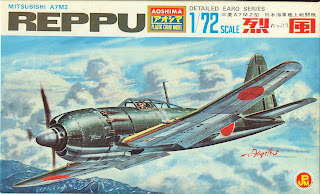 Courtesy of Ken Glass and Jacob Terlouw here are some more examples of Aoshima box art over the years. Cataloguing the various box styles and sorting them into a timeline would be quite a challenge! 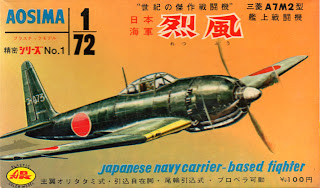 The A7M2 Reppu was the only injection molded game in town until the relatively recent issue of the superlative Fine Molds kits, some releases of which include a photo-etch fret. 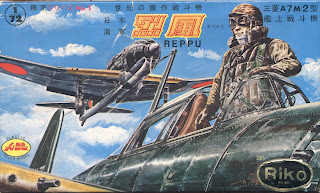 Aoshima box art was frequently innovative in composition and here on another Reppu box it has a decidely heroic style which must have been iconic and inspiring for its home audience. The surface lustre and colour of the aircraft reveal a knowledge perhaps rooted in actual observation. 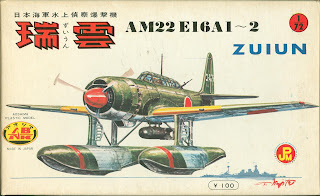 The Aoshima Zuiun "Paul" floatplane was also unique until the arrival of the Fujimi kits. Although presented as 1/72nd scale the kit is closer to 1/79th scale. 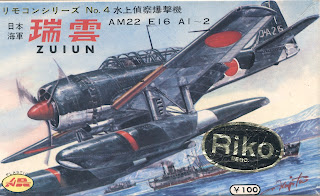 Another Zuiun box art variant with the horrible Riko sticker that degrades to an unsightly blemish but still manages to remain resolutely cemented to the box. The people who slapped these on the boxes must have been as devoid of any aesthetic sensitivities as the person who designed the over-sized monstrosity. 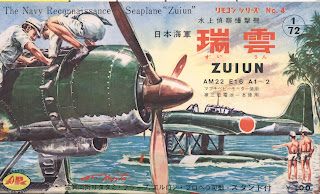 In another imaginative and evocative composition IJN mechanics are busy as the Zuiun rocks gently in the water off a palm-fringed South Pacific beach. The artist was 9 years old when the war ended. 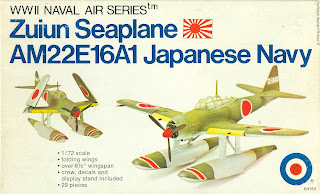 The Entex re-packaging of the same kit gave us a look at the model and its possibilities. Not very inspiring but not helped by the standard of construction or the unattractive "pea soup" colour scheme. The kit included the option for an odd looking open canopy too.

This was the most recent packaging for the Zuiun, again presented as 1/72nd scale in a box too large for the contents. This time the decal sheet contained intriguing options including Akoku presentation legends and a civil registration! Nice instrument panels too but nowhere to put them without a bit of plastic card work. 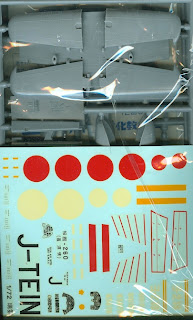 Unfortunately the instruction sheet offers no explanation as to how any of these extra markings are supposed to be used. 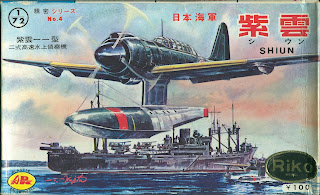 Aoshima's Shiun "Norm" was always a favourite of this unusual floatplane and is still the only mainstream injection molded kit of the type. This box with it's excellent vintage-looking art by Tatsuji Kajita reveals the dreaded black and gold Riko sticker (see Part 1) whose adhesive is impervious to most known solvents. Attempts to remove it usually end in failure and a worse looking box. If in doubt leave well alone! Born in 1936, Tatsuji Kajita was well known in Japan for his box art for Imai and Otaki as well as his prolific robot toy and manga artwork in the 1960's and 1970's. For the adventurous who wish to explore his toy artwork further. 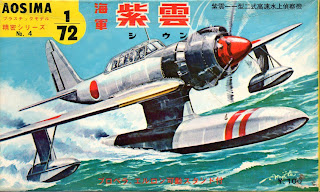 Earlier Tatsuji Kajita artwork on an 'Aosima' labelled box. Back in the day and pre-Donald W Thorpe such box art always caused confusion - was it meant to represent grey or natural metal? 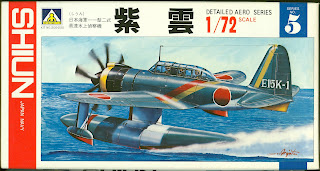 Did anyone ever copy these garish markings on a model?  RS Models released a new short run kit of the Shiun which was shown here and looks very good. Aoshima's old "Norm" can still be a fun build though and offers some challenging problem-solving to the adventurous builder. For anyone wishing to explore "Norm" and his exploits in more detail there was an excellent article in the original Arawasi magazine Issue 1 of July 2005 which will hopefully be reprised by the magazine in future. 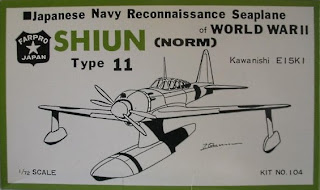 Farpro's issue of the same kit presented it with a simple drawing on the box. The Farpro kits were produced by Aoshima for US distribution. The whole range was made available under this logo but not much more is known about them. 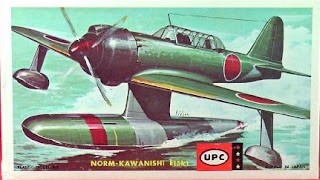 UPC (Universal Powermaster Corporation) also re-boxed and re-issued many kits in the USA from foreign manufacturer imports, including Aoshima's Norm. UPC kits were also re-exported and I remember some UPC kits being available in the UK but I'm not sure if the whole range was available here. 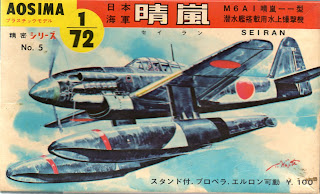 The submarine-borne Seiran was also included in Aoshima's repertoire of floatplanes, shown here in the 'Aosima' boxing. Unfortunately it was closer to 1/78th scale and it's uniqueness was trumped by the release of a Tamiya kit to 1/72nd scale that is the silk purse to this sow's ear. The two kits built together make a fascinating comparison of how far plastic model technology has come in the intervening years. 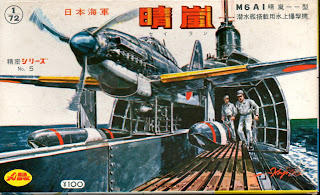 This innovative Tatsuji Kajita box art depicts Seiran being readied for a mission from its submarine hangar. In 1964 it was a revelation to see a Japanese inline engined floatplane of almost fighter-like appearance carrying a huge bomb and being carried by a submarine! 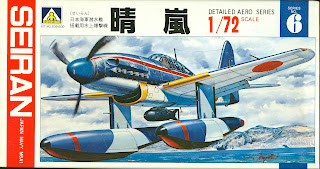 Blue if you want it, with a red racing stripe in this later box art of Seiran. Wonder how many got built and painted like this? Aoshima kits invoke long summer holidays, sunlight streaming through the bedroom window and the box art dreams that carried us to the Pacific.
Image credits: All Aoshima box art and kit/decal images © Aoshima & Tatsuji Kajita via Ken Glass, Jacob Terlouw & Straggler
Posted by Straggler 脱走兵 at 12:03

Marvelous collection. I didn't realize Aoshima (and the other boxers of these kits) had quite this range of art. As you probably know, LS, which made some beautiful kits for their day, also had some evocative box art. Perhaps a follow-up on that firm could be hoped for...
Ian

Thanks for the comment - and thanks to Ken and Jacob for sending in their box art too.

An LS feature or two is intended - their box art was almost as diverse as Aoshima.