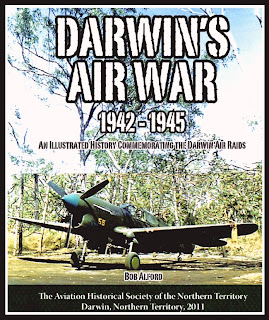 I've long held a deep interest in and admiration for the Antipodean war against Japan, and especially for the operations of the Royal Australian Air Force (RAAF) and Royal New Zealand Air Force (RNZAF), but internationally this subject tends to be somewhat over-shadowed by America's war. Many of the more personal accounts of Australian and New Zealand involvement are privately published or published by small printing houses and are often unlikely to be found in British bookshops. It takes a little determination to search out and find such gems as 'It Had To B.U.', 'The Whole Nine Yards' or 'Kittyhawks And Coconuts' but by perseverance and patience one such slim and fascinating volume found its way into my hands over ten years ago. It was 'Darwin's Air War 1942-195. An Illustrated History' published by the Aviation Historical Society of the Northern Territory in 1991 and authored by Bob Alford. Packed within its 80 pages was a veritable cornucopia of revelations, data and photographs as well as a perfect demonstration of how to combine the historical, the visual and the interesting to relate a story that is both illuminating and readable. 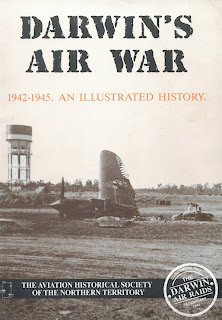 Now Bob has reprised the 1991 book and expanded it into a magnificent 260 page 2nd Edition documenting the aerial warfare over and around Darwin from 1942 to 1945 ('Darwin's Air War 1942-1945 An Illustrated History Commemorating The Darwin Air Raids', published by the Aviation Historical Society of the Northern Territory Inc., 2011 - ISBN 978-0-9807713-05). The inclusion of 'Illustrated History' in the title often suggests a book with lots of pictures but little meat. Nothing could be further from that here. The book is packed with meticulously researched information and data.
The excellence begins with the cover and that evocative colour photograph of a 49th FG P-40E standing at readiness and it continues to the very last page. And this account does not just focus on Australian exploits but generously describes the Allied and Enemy action too, gently lifting the mask from the demonised attackers to reveal individual, human stories. One of the highlights of the book is a central colour section displaying the colour photographs of Clyde H Barnett Jr of the 8th FS, 49th FG, USAAF. These crystal clear images are almost enough to convey the reality of the air war but every other part of the book does exactly that too. The main narrative is organised by chapter as follows: -
1. The Defence Build-Up - a military town, a RAAF presence and a war close to home
2. Desperate Times - the RAAF in the NEI, ABDACOM and the withdrawal
3. 19 February 1942 - the first raids, Australia under attack
4. Aftermath - initial defences, airfields and Australia reinforced
5. Into Combat - the enemy exposed, radar and a learning curve

6. Changes in the Air - Reorganisation, Americans depart and the RAAF takes over
7. Striking Back - Hudsons take the lead and pay the price

8. Changing Fortunes - the Spitfires arrive and he enemy under pressure
9. A Show of Force - the Japanese a fading threat?
10. The Heavy Bombers - Striking afar and a circus arrives
11. Liberators - the RAAF gets seven league boots
12. The Offensive Rolls On - moving north and boredom the enemy
13. Game Over - the unsung strength, victory at last and Darwin today

That should give a flavour of how comprehensively and interestingly the subject has been tackled but it does not advertise the fact that almost every page displays carefully chosen and relevant photographs, many of them rare and from Japanese private sources. Although this book is concerned mainly with Australia's response to the Japanese air attacks anyone interested in Japanese aviation history will find it of compelling interest and use. As a testament to the care and attention taken in this publication a four-page booklet of additions and corrections that expand even further on the comprehensively written text is also included

Has Bob advised where and how to purchase a copy of his new edition?

I've now added the email contact details to the review.