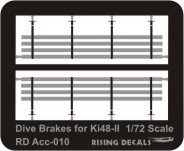 From Rising Decals - a decal company with an established reputation for innovative and original Japanese aviation related subjects, come new and very welcome photo-etch sheets for Ki-48 dive brakes in 1/72 and 1/48th scales together with a plethora of radar antennae for various IJN types. A Good Idea and one that I hope they will be able to develop further.

A really neat aspect of the presentation is that each set contains appropriate decals and a colour guide for an aircraft equipped with the gear. The Ki-48 example is from the 8th Sentai's 2nd Chutai with the distinctive "octopus eight" tail insignia, as operating over Burma in early 1944 (you get two of the  sheet shown above). The dive bomber capability of the Ki-48-II was developed in response to its growing obsolescence and vulnerability in the air, reflecting the earlier capabilities of the Junkers Ju-88, with an intention to deploy the type nocturnally to make precision moonlight dive-bombing attacks against enemy airfields. In China in early 1944 the 5th Air Army HQ directed that:-
"Type 99 light bombers will assault and destroy enemy aeroplanes in night attacks on enemy airfields."
The 16th and 90th Sentai were specially trained in this form of night dive-bombing attack together with radio guide beam usage and long range navigation techniques. To improve performance the crew was reduced to three and all daylight operating equipment removed. This allowed the installation of additional fuselage fuel tankage  to increase the operational range to 1,100 km and in this form the Type 99 light bomber was used against the B-29 airfields in China. Displaying a Type 99 crewed up, in dive-bombing mode with the flaps deployed and the bomb bay open and bomb crutch extended would look impressive - and different - especially painted black! 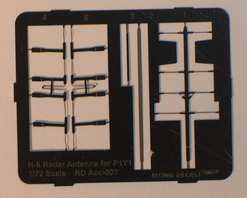 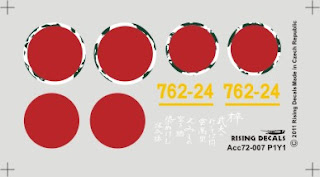 Thanks to Mirek of Rising for samples. Highly recommended.
Image credits: All © 2012 Rising Decals
Posted by Straggler 脱走兵 at 11:45