Here is a table showing some of the kanji characters painted on the tails of the 50th Sentai's Hayabusa (Ki-43) to identify individual aircraft. They were usually painted on the rudder in white, sometimes above and sometimes below the lightning bolt device. Generally the practice was to name aircraft in the 1st Chutai after birds, those in the 2nd Chutai with moral exhortations or sayings and those in the 3rd Chutai from types of wind. However, there was also the occasional play on individual given names and some aircraft transferred between Chutai retained their original names. The famous lightning bolt device of the Sentai was painted in the Chutai colour. 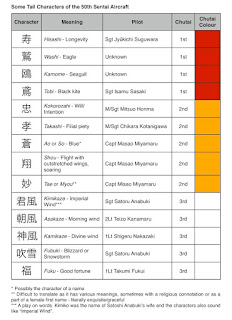 When the 50th re-equipped with Hayate (Ki-84) they continued to name individual aircraft in this way but the characters were usually painted on the rudder below the lightning bolt device. Examples are WO Tomojiro Ofusa's 'Mutsu' (陸奥) of the 1st Chutai named after his native province in Japan, and Sentai commander Maj Koki Kawamoto's 'Oni' (鬼 - Demon or devil) in the Sentai Hombu shotai (HQ staff flight).

The heading illustration depicts the Ki-43-I of 3rd Chutai leader 1Lt Shigeru Nakazaki named 'Kamikaze' (Divine Wind) and operating from Toungoo in Burma during the winter of 1942/43. The broad red fuselage band in front of the white senchi hiyoshiki (war front sign) rear fuselage stripe indicates his leadership of the first Shotai (flight) in the Chutai (and therefore his leadership of the whole Chutai). Note that this aircraft does not have yellow wing leading edge IFF strips or white border added to the fuselage Hinomaru. The illustration above depicts the Ki-43-I s/n 402 (manufactured in April 1942) of M/Sgt Chikara Kotanigawa who crashed this aircraft behind British lines in the Chittagong hills on 15 December 1942 after accidentally hitting a tree whilst in a very low-level pursuit of the Hurricane IIc of PO Gray of 79 Sqn RAF. M/Sgt Kotanigawa resisted capture unsuccessfully and subsequently committed suicide whilst held as a POW in Delhi by shooting himself.  The narrow red 1" borders to the 6" wide senchi hiyoshiki, although seldom illustrated in profiles, are confirmed in an RAF intelligence report on this aircraft.

Updated 22 March 2019. The assistance of Keishiro Nagao, Shigeru Nohara and Tetsuya Inoue in the preparation of the data for this blog is gratefully acknowledged.

Re Ofusa's mount... Mutsu was actually a province, not a prefecture. By the time of Ofusa's birth the provinces had been replaced with prefectures. His native prefecture was according to different sources either Miyagi or Aomori.

This is very useful info for modellers! Thanks for this.
One of my first Oscar was painted with a pink lightning bolt based on a profile in R.A.F Flying Review(Vol.XVI
No6"The Gaudy Killers") . I know better now, but at that time I was very pleased with what they published on Japanese aircraft!

Thanks for the data table, Nick.