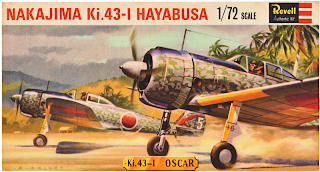 Some of the prolific and very attractive box art of artist Brian Knight 1926-2007 is featured at a commemorative website setup by his grandson that promises to provide more details of his career and work. Of interest is the inclusion of his original draft and notes for the box art of the 1960s 1/72nd Revell Ki-43 Hayabusa kit H-641 (reproduced below) which differ slightly from the final version. 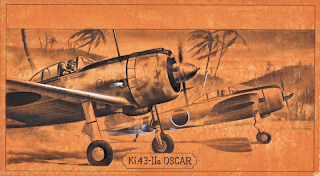 On the back of this draft are the following notes:-


"The Nakajima Ki.43 Hayabusa (oscar) was exceptionally maneuverable but suffered from light armament. However Japanese airforce 'aces' established the larger part of their score while plying this aeroplane. 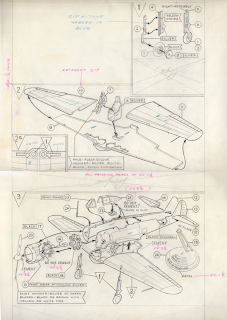 It is apparent that Mr Knight also prepared the drawings for the kit instructions as the original layout for these is also revealed. They show an appreciation for the shape and details of the Ki-43-I which were sadly not reflected in the kit parts. Note the fine spinner and cowling shapes, the canopy and the head rest/rollover pylon attached to the seat and the slender rear fuselage. The only obvious details missing are the annular oil cooling matrix in front of the engine and the tubular optical gun-sight emerging from the windscreen. If Mr Knight's drawings had been faithfully followed by the mould makers we might have had a very neat kit of the early Hayabusa in the mid-1960s. The most glaring shape issues of the kit were an over scale and incorrectly shaped spinner, an over scale canopy, a rear fuselage that was too fat and deep and undercarriage legs that were too short. All these combined to prevent the finished model from presenting a good impression of the original aircraft but were correctable with work. Unfortunately the world still awaits a good Ki-43-I in 1/72nd scale. 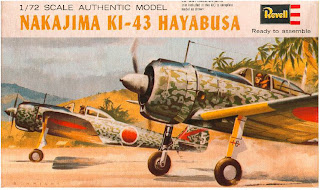 There were two versions of this box art on the issued kits. The first, on the small black-sided ""picture frame" box with name plate as seen in the heading illustration depicted the aircraft with a three bladed propeller like the Ki-43-II, as drawn and titled correctly in the draft. But this box had the title 'Ki-43-I Oscar'. The second version used on a later issue box was corrected to show the two-bladed propeller of the Ki-43-I, which was the type actually depicted in the kit, but the titling on that box was simply 'Nakajima Ki-43 Hayabusa'! I suspect that this might be the reason that the propeller in the box was so poor because during the production of the kit there was some confusion about variants and a last minute alteration. 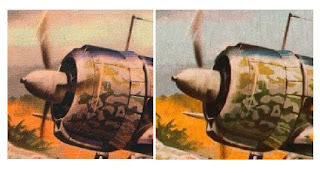 Image credits: All © Briant Knight Estate and Revell
Posted by Straggler 脱走兵 at 11:13

Amazing stuff! It's great to see how his artwork evolved during the creation process.

Thanks for finding this material and presenting it here.

This was the best box art at the time, fascinating!
I was very impressed when I saw these boxes for the first time. But the contents were disappointing- so I went for the LS kits of the Ki43. I regret not having even one of those Revell boxes.

Thanks for posting this sir! You've definitely brought back some wonderful childhood memories of my favorite Japanese a/c model, so much so I bought TWO of these kits to build way back when.