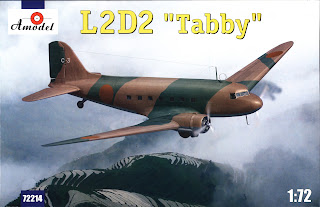 Way back in September 2011 attention was drawn to the release by Amodel of two new kits of the "Japanese Dakota" - the L2D2 and L2D3/4 "Tabby" twin-engined transport 'plane. I still haven't seen these kits in person or come across a review or build, although there is presentation of the kit sprues here. Still, in the spirit of the pioneer and you never know this rambling discourse will offer some information on the interior colours of this type, FWIW and in the hope that someone, somewhere, might find it useful as they sit contemplating the kit parts and a fully scratch-built interior complete with transport load and passengers.

It is a pity that there were not more like Leading Aircraftsman Morton 1/c who, wandering amongst abandoned Japanese aircraft at Meiktila in Burma and at Don Muang in Thailand, not only decided to make notes of the aircraft he encountered but carefully recorded their colours too. He was a keen aeroplane spotter and quite possibly an aeromodeller, so thankfully he consigned these notes to posterity by sending them to be published in the weekly British journal The Aeroplane Spotter at the beginning of 1946. Now there is a considerable amount of rubbish written on various forums about the value of eyewitness accounts but seldom do these often waspish observations differentiate between remembered colours as probed and prodded years afterwards and those colours recorded contemporaneously and objectively for the sole purpose of doing so. The latter, I would argue, are infinitely more valuable than the former, not least because the human mind has no capacity to remember colour accurately and various factors can influence memory to change not just the shade but the complete hue. Contemporaneous written notes on the other hand... 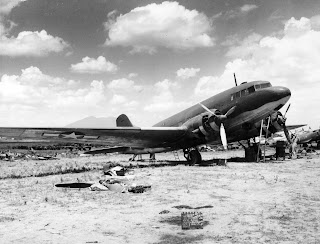 LAC Morton 1/c recorded his colour observations in the BFS era (Before Federal Standards) so his descriptions are by necessity limited to characteristics of hue without precision. This approach happily engaged the majority of modellers well into the late 1960s, perhaps until the appearance of the first "authentic" paints and the re-emergence of the dreaded "Luftwaffe experten", not in the skies over Europe this time but in the hotly contested realms of model clubs and model shows, soon to branch out into the hunting grounds of the internet forum. Bearing in mind the complex, inevitable and infinitely  imponderable realities of applied paint variance and degradation this older, simpler, more pragmatic approach is not as primitive as it might at first seem to a generation of modellers thoroughly spoilt by Mr Tamiya and the even more awe-inspiring Mr Zoukei-Mura. And, as always, one must weigh the value of the data in the balance with what else is available to inform. In a vacuum some information is arguably better than none. Without more ado, I give you, ladies and gentlemen, LAC Morton 1/c (my comments in brackets):-

"Tabby 2-2 - After having seen nothing but Army types it was quite a pleasant change to find one more or less complete example of this Japanese development of the DC-3. Several changes between Tabby 2-2 and its allied counterpart were noticed. Rough notes are as follows:- Spinners ftted to the airscrew hubs of the Kinsei 51, 52 or 53 motors. Passenger door on port side. No hand rails. Interior layour changed a great deal from the Dakota II. Small lavatory on starboard side was much further forward and included a neat folding wash-basin. A drop flap on rear lavatory bulkhead disclosed a further compartment, presumably used for ballast (or perhaps personal baggage?).

"Entire interior colour scheme was fawn (light yellowish tan) and chromium. Walls were soundproofed. Both port and starboard sides deep metal luggage racks with chromium handrails extending the full length of the compartment. Electric lamp sockets were fitted every so often on the sides of the racks. Wooden floor. Pilot and second pilot sit side by side in normal fashion. Wireless operator and navigator behind pilots on port and starboard side respectively. No "solid" partition between pilot and wireless operator. Large hatch immediately above pilot's position. Small hatches above other two crew, both of which have extra side windows also.  Entire cockpit very light. Compartment for luggage behind crew's section was approximately the same size and shape as the Nav, W/OP's on the Dakota C Mk. IV. This extra space, taken up at both ends by these extra compartments, makes passenger accommodation smaller. Seats and half floor had been removed so I could not judge the seating capacity. Small door with circular window immediately in front of radio operator on port side, Half of nose section swings upwards and outwards. Streamlined metal D/F egg with large radio mast behind is fixed on top of fuselage. Seven windows each side. Third up from tail on starboard side incorporated an emergency exit. On port side two similar emergency exits were located second and third up from the tail. Apart from the motors and minor details, the silhouette contained in THE AEROPLANE SPOTTER No.104 is correct for this version. 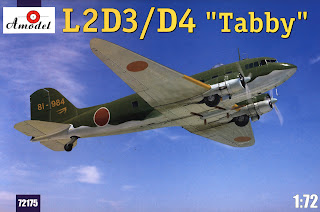 With grateful thanks to LAC Morton 1/c and Charles W Cain, Editor of The Aeroplane Spotter who preserved the record of his valuable observations for future generations. More of these fascinating documents will feature in future blog posts here.

Thanks for posting this, Nick.

Very interesting description of colors, thank you! I wonder what this interior tan color looked like, may be something similar to Tan (N38) as seen on some A6M3 interior remains?

Please bear in mind that this fawn colour would be mainly the fabric soundproofing inside the cabin. If it was anything like the interior of the civil Nell then probably something similar to FS 33717. The civil Nell had a dark reddish-brown carpet and sage green 'plush' covered seats of the type seen in old cinemas.

From the location I suspect that this might have been an ex-civil or military VIP Tabby requisitioned for freighting by the Army and with the seats stripped out.

Thanks, Nick. I haven't thought it was fabric, thanks for pointing this out. Information regarding civil Nell (L3Y) is also very helpful.

Thanks for posting these most interesting observations by LAC Morton. Long time ago I photographed these pages with a simple camera and, as I see it the best is yet to come. I was most impressed by what he wrote about the Gremlin T/F planes.

There is some pretty clear colour footage of one being shot down here:

Ken, Jacob, you are welcome and yes, more to come!

Jerry, thanks for posting that interesting link.

That's an unusually detailed description for that period and the circumstances. Excellent info!