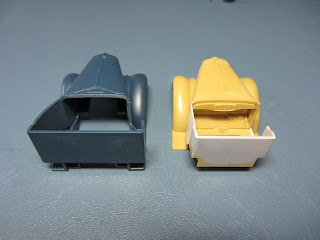 Dan Salamone's interest in Japanese airfield vehicles motivated him to embark on a challenging project to replicate a 1/48th scale Isuzu TX 40 airfield tug from a single image showing two such vehicles on the tarmac at Hamamatsu towing Mitsubishi Ki-21 "Sally" bombers. Using the Hasegawa kit the project was conducted in tandem with a TX-40 fuel truck with the intention of scratch-building canvas cab roofs for both. 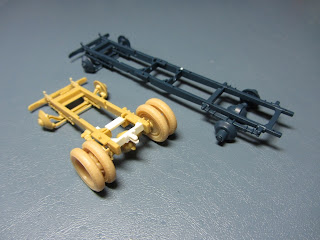 The images show the amount of work needed to turn the basic TX 40 kit into this tug. The chassis has been severely chopped, the cab has been "sectioned" to narrow it, and all the white items are totally scratch built using Evergreen sheet plastic, strips and rods. The same approach could be taken in 1/72nd scale using the intermittently available Hasegawa kit in that scale and hopefully Dan's images will serve as an inspiration to have a go. 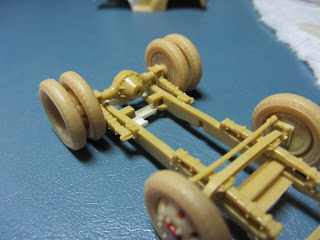 The fenders were made two years ago, but just finally attached. Heat formed around a wooden dowel, then cooled. The tool boxes were created over the past few days. The large rear tool bin was a tedious process as it has quite a bit of internal structure to maintain it's shape. 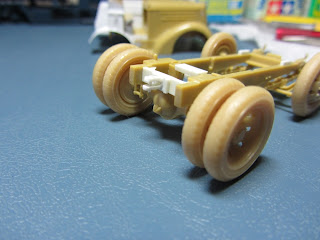 Dan's favorite parts are the tow hitch and rear frame member. These parts were also made two years ago, and for reference he used images of other period truck frames. In his words - Shep Paine's "creative gizmology"! 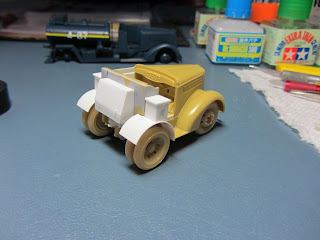 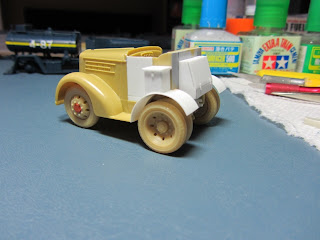 There are gaps to fill and some detail work still awaits, but Dan is happy at getting the project to this point. It is apparent how much has gone into the work and the excellent results are apparent even before completion. Dan is now awaiting an injection moulded 1/48th Ki-21 to tow behind it . . . In fact a decent Ki-21 is needed in both scales and it is a mystery why this most important of Army bombers continues to be avoided by mainstream kit manufacturers. 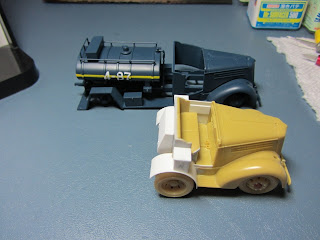 With thanks to Dan for the images and details of the project and for kindly allowing me to share them here.

Thanks for including this type of article in addition to those about the aircraft and markings. It helps provide a more complete history of the Japanese efforts in WWII.

This looks really great, Dan. I think vehicles are tougher to get right than airplanes. When you're done with this you will have a unique project - and maybe the folks at Gaso.line or elsewhere will see what an appealing kit it might make...and announce one, which would either make you proud or nuts!

Thanks Mark, I appreciate it. A kit of it would probably make me feel a little of both! ;-) Will be sure to send Nick images once it's complete.

Thanks for sharing your in-progress work, Dan. Nice job on it, as always.