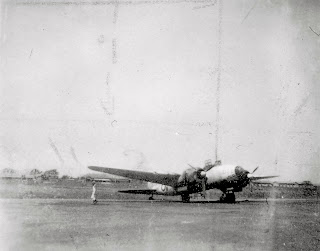 Regular correspondent Jacob Terlouw has very kindly sent me these rare images of the SEAC (South-East Asia Command) Gremlin Task Force Ki-21 named "Doc" (GTF No. 19) as photographed at Seletar in Singapore circa 1945/46. 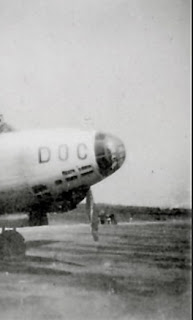 The RAF administered but Japanese operated aircraft of the Gremlin Task Force are a fascinating but little documented by-way of the post-war political complexities and humanitarian turmoil that existed in French Indo-China and indeed throughout SE Asia. Back in January I described some of LAC Morton's valuable observations of 'Tabby' aircraft he had explored in Burma and Thailand and which were published in the British magazine The Aeroplane Spotter in 1946. This astute chronicler also made a record of some of the Gremlin Task Force aircraft he encountered. Most of the aircraft were named after characters in the "PO Prune" cartoons in the RAF Tee-Em magazine (of which more anon) or Snow White's Seven Dwarfs from the iconic Walt Disney cartoon film of 1937. The image below is scanned from the Aeroplane Spotter ('Japanese Notes' - Vol.VII No.160 April 20 1946) and appears to be of the same aircraft or one of the others as described.

The colour scheme is white on the upper surfaces (see below) with large blue and white SEAC roundels covering the positions of the original Hinomaru. The name 'Doc' is painted in large letters on the nose and there is a crudely painted two-digit number on the rudder. But I'll let LAC Morton take over with his wonderfully detailed descriptions of the various aircraft, exactly as published in the Aeroplane Spotter Vol. VII No. 156 February 21 1946. As usual some of the minor colour details he records fly in the face of what we think we know about Japanese aircraft...

Sally 1 (No. 14, no name) - One of the later production series. Armament removed, large open mounting for 7.7mm m/g in extreme tail. Field of fire probably 10-15 degrees in all directions. "Old type" dorsal enclosure. View from pilot's position poor. Very well streamlined motors. No spinners fitted. Camouflage - (a) Upper surfaces (including fin and rudder). White. (b) Under surfaces polished metal finish merging into upper surface camouflage. (c) Markings, small RAF blue and white roundels on under surface of wings and on each side of fuselage (standard SWPA type), very faint red crosses on top and bottom surfaces of wings on a white disc. The number '14' in blue on base of rudder (both sides).

Sally 2 (No. 10, "F/Lt Lyne Chute") - Armament removed and fitted with the tail gun position. Space for dorsal turret faired in. Very well streamlined motors, not shown in recent silhouettes in The Aeroplane Spotter. No spinners. Three bladed black metal airscrews with white tips. Both Sally 1 and Sally 2 appear to be well liked by the Japanese pilots. Handling characteristics, both in the air and on the ground, are very good. "F/Lt Lyne Chute" made the shortest twin-motor landing I have ever seen. Camouflage - (a) Upper surfaces (including fin and rudder) as for Sally 1. (b) Under surfaces. As for Sally 1. (c) Markings. As for Sally 1 but with no crosses visible. The number '10' in large blue figures on each side of the fin and rudder. "F/Lt Lyne Chute" in blue block letters on each side of the nose.

Sally 2 (No. 19 "Doc") - Details for Sally 2, described above, apply. "Doc" in blue on each side of the nose and the number '19' on rudder. White spinners fitted to this machine. Surrender markings visible below roundels. See Photographs. (Aviation of Japan Note: Alas, although reproduced here as published the quality of the images is not clear enough for these details to be seen. What happened to LAC Morton's original photographs remains a mystery). 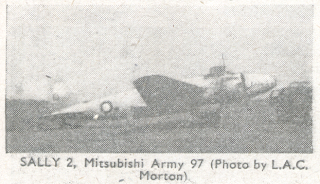 Sally 2 (No. 17 "Happy") - Details for "Doc" apply. The numbers '17' in small blue figures on each side of base of rudder. "Happy" on both sides of nose. Surrender markings visible beneath roundels. Yellow leading edge to wing extending half way out from roots.

Tabby 3-2 (No. 27 "Fanny's Frolic") - This model 3-2 makes an interesting comparison with the earlier 2-2 described in my letter of January 10. The differences between this aircraft and its Allied counterpart are fairly well known by this time - extra windows on cabin, well streamlined motors with spinners, etc., etc. A fact not mentioned before is that the landing light is fitted on the port wing only. This particular version of the Model 3-2 had a large double loading door and although I was not able to inspect the interior, I presume it was fitted out in similar manner to the Dakota. Probably long padded seats extended down each side of the fuselage instead of the usual "ash trays" installed in the RAF version. An open D/F ring and long radio mast were fixed on top of the fuselage above crews' position. Two large hatches appeared on each side of the mast. Camouflage - (a) Upper surface (including fin and rudder). White. (b) Under surfaces polished metal finish merging into upper surface camouflage. (c) Markings, RAF blue and white roundels on wings and fuselage. Green surrender crosses could be seen faintly underneath. "Fanny's Frolic" in black on each side of nose. The number '27' in black figures on both sides of rudder. Black spinners and airscrews with white tips. Large dark olive green anti-glare panel immediately in front of cabin.

LAC Morton we who are about to model salute you!  Of interest is his emphasis on the streamlined design of the closely cowled Japanese engines, a feature that with hindsight and the familiarity of modelling we tend to take for granted but in the context of the aeronautics of that time perhaps worth appreciating a little more.  In Part 2 we'll explore a little more of the background, circumstances and surprising activities of the Gremlin Task Force and the real PO Prune with more details of the 'Topsy' (Ki-57) and 'Lily' (Ki-48) aircraft in use. Reading these evocative descriptions is a wistful reminder that a mainstream Ki-21 kit in the divine scale is still so badly needed. I'm not holding my breath but for the sake of our wallets and the potential of all those fascinating schemes let's hope it is Airfix...

Fantastic information on a little known aspect of the immediate postwar use of Japanese aircraft.

A medal to that enterprising LAC.

What a pity there are none of these aircraft remaining.

Thanks Jacob and Nick...

I'm glad somebody else thought so!

Great article, Nick. Thanks for posting this enlightning piece on such a forgotten episode.
Best regards,