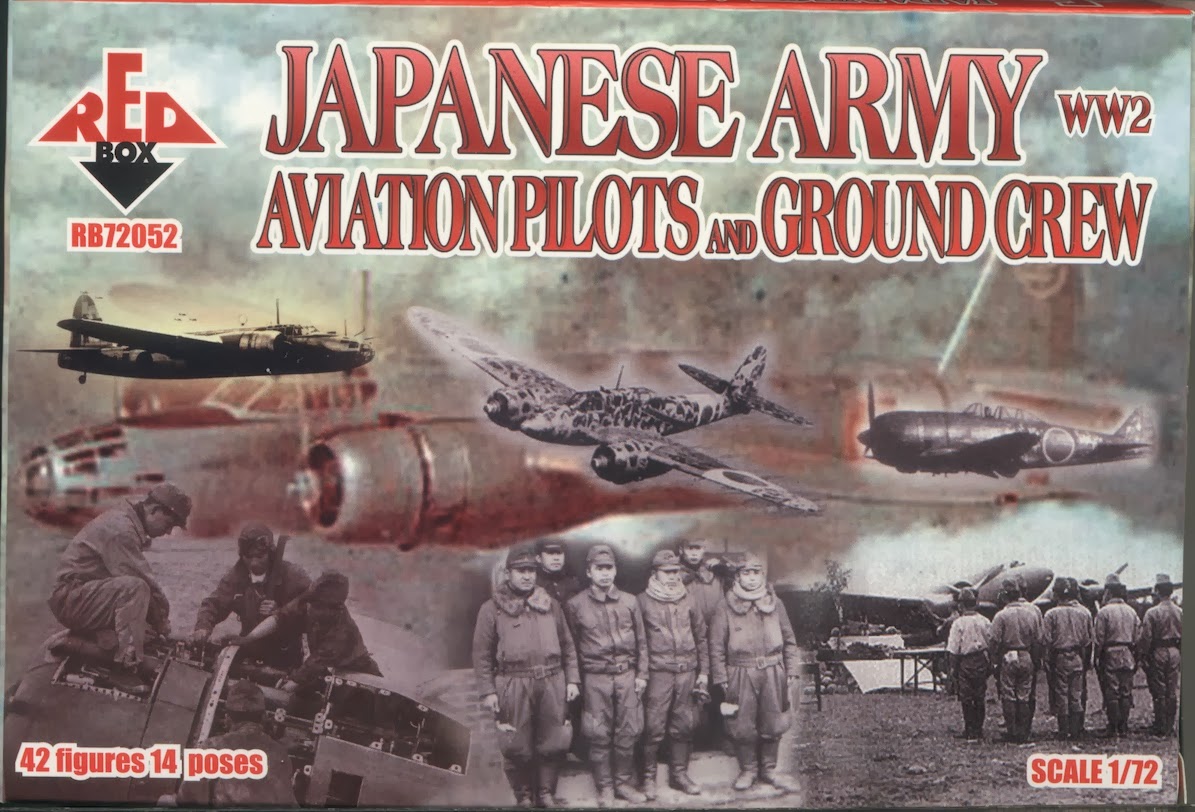 I have now had the opportunity to examine the plastic versions of the Red Box Japanese Aircrew figures originally released in resin and described here in August last year. Each set contains three identical sprues with 14 figures in different poses - so there are three figures of each pose in the set for a total of 42.  There are two additional figures in each set which were not included in the resin sets.

The three sets available are:-

The two additional figures are a pilot pulling himself up to the cockpit using the cord often attached to fighters for this purpose and a ground  crew man in shorts and cap with a paintbrush and pot of paint. Unfortunately the latter figure was short shot in my set and missing his right arm with the paint tin!  I especially like the ground crew figure in shorts and singlet lifting a belt of ammunition from a box.

The extra figures are a ground crew man in overalls and cap pushing an aircraft tailplane and another ground crewman in floppy jungle hat kneeling using a screwdriver. My favourite figure is the man standing to attention and signalling with flag.

All the figures are cleanly moulded with the first two sets in brown plastic and the Kamikaze set in white. The plastic is of the polythene type but harder than Airfix figures for example. The figures are not as "chunky" as the illustrations suggest but are "small" 1/72nd - rather like Preiser figures. The poses are imaginative and useful, offering the possibility of modification to create even more variations. I should have liked to see more pilots in tropical dress in the IJA set as the flying suits on four of the pilots are more typical of the bulky winter type. I'll endeavour to add some images of the actual figures to the blog shortly.

For anyone who likes to display their aircraft models with figures these sets are a must. The only snag is that they don't appear to be widely available and even though they are manufactured in Ukraine I had to order mine from Taiwan.

Thanks for pointing this out, Nick! It is total new for me. I suppose the earlier release, in resin, must have crisper detail but the fact that this one is plastic will made it available to a wider group of modellers.
Best regards,

These look great Nick and I commented on them previously.

Does anyone have a source for acquiring the sets please?

FWIW I got mine from:-

who are based in Taiwan. Reliable and quick delivery too.


Thank you Nick for this review, I ordered both the Army and Navy pilot and ground crew boxes.

Great news! Hannants are stocking the IJA & Kamikaze sets, but they are currently listed as "future releases".

Thanks for your review of these Nick! I've been waiting for someone to get a look at them as I missed the initial resin release, and my "pusher man" (Michigant Toy Soldier Co.) was OOS on them.
These, combined with the new injected figures from Fine Molds, which are beautiful BTW, will be a great addition!