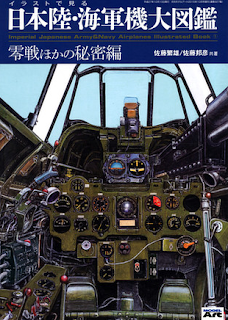 Many of this blog’s readers still consider the Maru Mechanic (MM) publications on Japanese aircraft types as invaluable, though sadly it’s been over thirty years since we’ve seen a new one.  They featured remarkable color paintings of cockpits and interior details that have inspired modelers worldwide and which were illustrated by (I believe) Takani Yoshiyuki, who also painted much of the early box art for Tamiya, Fujimi, and others as well as Tamiya’s iconic armor box art.  He is probably best known in Japan these days for his imaginative Macross art.   The MM cockpit paintings were truly remarkable interpolations, however, as their sources were so meager: the few surviving factory and manual drawings; scarce period photos from both Japanese and American (TAIC) sources; in rare cases, museum aircraft - sometimes with little original equipment; a handful of surviving relics; and probably conversations with Japanese veterans still alive and sharp of memory at the time these were created.  The results of this detective work came together wonderfully, like a jigsaw puzzle finally finished on the tabletop. 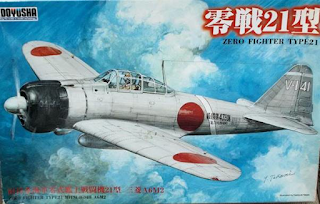 I’ve often wished the series could have continued, and we could have seen more of such art.  So two recent Model Art Special publications published in November 2015 and May of this year came as a very pleasant surprise.  Entitled  Japanese Army and Navy Airplanes Illustrated (Book 1 and Book 2), they boast a wealth of vivid color paintings of Japanese aircraft details that, though not by the same artist, bear much the same style and contain that same level of detail and thoroughness.  They are researched and illustrated by the late Sato Shigeo, a IJNAF veteran, and his son Sato Kunihiko. These large format softbound books feature 163 and 147 pages respectively and in Japan, sell for 2500 yen (about £18 or US$24 - Ed.).  They are dense in detail and every page is in color.  As I understand it much or most of the material has already appeared as a semi-regular feature in monthly issues of the Japanese Model Art magazine.

As a collection, their approach is generally twofold: to embellish detail areas that have been covered more generally in previous Japanese and Western publications; or to present partial material on rarer types as well as a few peripheral subjects often neglected, like maintenance equipment, drop tanks, and fuel trucks.  In both cases the fascination, especially for modelers, is to discover previously unknown or unseen details.  It also means no single aircraft is covered comprehensively (or even close to such) and because of the “scattershooting” approach of these books, they may not appeal to everyone.  Each volume also features information markings and stencil details, and the paintings that focus on certain areas of aircraft highlight many group markings and painting variations, thought that is not the main focus.  Both books also include superbly built and photographed models that dovetail with featured aircraft – a 1/72 Zuiun (Paul) on a catapult, a 1/48 Hasegawa F1M2 “Pete,” and a 1/32 Hasegawa Ki-44 Shoki. 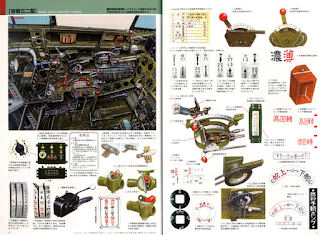 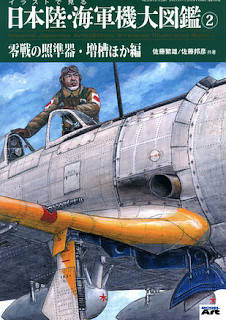 The second book has a great deal of useful information on Nakajima’s Ki-44 and a wonderful section on prewar Japanese biplanes and triplanes: Mistubishi 1MF, Nakajima A2N, Mitsubishi B1M and B1M2.  And for those of you with the ancient Marusan Mitsubishi 1MT Triplane (Type 10) Torpedo Bomber in the closet, who might have thought ‘if only there was any documentation on it,’ hey hey: your excuse is obsolete.  There are twelve pages on it that include the floatplane version for the really ambitious (John Haas could do it!)  There are great illustrations of different torpedo sights and equipment, including their unusual mountings from above on Mavis and Emily, and a plethora of aircrew uniform details.  I’ve left out a lot of things that appear in each book.  Some might understandably dismiss the material as mere arcana, and those with only a casual interest will probably opt for more focused titles.  But as Aviation of Japan has demonstrated over a period of many years, the art of interpolation is still required in piecing together clearer and more accurate accounts of the development, operations, colors, and markings, and details of these airplanes, too many of which have no survivor.  Arcana are essential puzzle pieces!  If you join me in embracing their material as ‘new,’ useful, and interesting you’ll want these books. 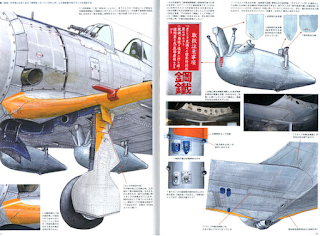 There is no English text in these volumes, save the title on the front cover.  One regrettable result is the artists/researchers are not identified for non-Japanese readers, which seems a shame.  Even though they are obviously aimed at a Japanese market, enthusiasts in many countries will value them, and it would have been nice to see them credited on the title page in several languages.  Anyway, if they sound interesting, tarry not, as sometimes Model Art Specials disappear pretty quickly.  I got mine through Hobby Link Japan.

With special thanks to Mark for this review. Readers should note that Volume 1 is already showing as 'Out of Stock' at HLJ but Volume 2 is still available.

Ive already got the Model art magazine! It's absolutely a must!

Great to see a second volume has been released! Thanks for the heads-up!

Many thanks Mark, and Nick for including it. Two more books I have to get...

Another Model Art publication I have found to be indispensable is No. 655, Aviator Uniforms and Equipment. This publication has all the details the title suggests along with instruments, gun sights, radios, bomb sights and cockpit equipment generally. It has been of enormous help in my research.

To me, the Model Art series sets the benchmark.

You probably recognized the style in the images Nick posted, but the same artists did the Model Art you mention. - Mark