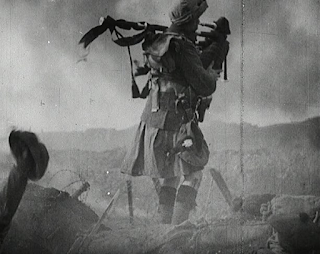 
HAVE you forgotten yet?...
For the world's events have rumbled on since those gagged days,
Like traffic checked a while at the crossing of city ways:
And the haunted gap in your mind has filled with thoughts that flow
Like clouds in the lit heavens of life; and you're a man reprieved to go,
Taking your peaceful share of Time, with joy to spare.
But the past is just the same,—and War's a bloody game....
Have you forgotten yet?...
Look down, and swear by the slain of the War that you'll never forget.

Do you remember the dark months you held the sector at Mametz,—
The nights you watched and wired and dug and piled sandbags on parapets?
Do you remember the rats; and the stench
Of corpses rotting in front of the front-line trench,—
And dawn coming, dirty-white, and chill with a hopeless rain?
Do you ever stop and ask, "Is it all going to happen again?"

Do you remember that hour of din before the attack,—
And the anger, the blind compassion that seized and shook you then
As you peered at the doomed and haggard faces of your men?
Do you remember the stretcher-cases lurching back
With dying eyes and lolling heads, those ashen-grey
Masks of the lads who once were keen and kind and gay?

Have you forgotten yet?...
Look up, and swear by the green of the Spring that you'll never forget.

Amen to that, but the politicians still haven't learned.

Moving to say the least. Almost unimaginable numbers of casualties. I suspect that there isn't a family in Great Britain that wasn't touched.

Who wrote this Nick? Reminds me very much of a poem by Konstatin Simonov.

Thanks for posting. This and your 2 July post are very moving tributes.

FWIW, I remember them and mine daily.

Hear, hear Bob. All they're good for is making the same mistakes over and over in new ways.

The poem is 'Aftermath' by the war poet and soldier Siegfried Sassoon, written in 1919. I should have credited it and will do so now.

Thank you, I have enjoyed Sassoon's poetry in the past very much, but didn't remember this one.

Here is the Simonov poem:

The House at Vyazma

In Vyazma is an ancient house
Which once one night was home to us.

That night we ate whatever came,
The source of drink was much the same.

At dawn, we went away to fight
And one of us lived not till night.

But this I know, that as he died,
We and the house were in his mind.

That night, as we prepared to die
We had forgotten how to lie,

How to betray, how to be mean,
How to cling on to what is mine.

That night it was revealed to us
That life is sharing, bread and house.

We'll find the traces of it there
Where stoves and bricks are burned and bare.

And putting all we have in one,
We'll build again that ancient home

With the same table, stove and pipe
And window stretched across with tape*

In every detail just and right
As on that memorable night.

And if there's one who at the end
Won't give his shirt up to his friend,

Who will not share the bread he has
Who lies to us or who betrays,

Or reaching the exalted ranks
Of former friends no longer thinks,

There let him sit alone as if
Tomorrow battle comes and death,

And if tonight a lie has passed
His lips, it yet may be the last.

As if he will not share his bread
With one who shortly will lie dead,

Or greet with cold and formal breath
The man who'll rescue him from death,

Instead of us, let bitter shame
Sit with him there in our old home.

And when we see him, we shall know
Whether he has been there or no.

And if he has not, then the mass
Of friends, will be by one the less.

But if he has, then not a thing
We'll say about it more to him.

Siegfried Sassoon is mentioned in Al Stewart's song "Somewhere in England 1915." I have always wanted to read some of his poetry after hearing that song. Thank you so much for posting this, and may we indeed never forget!

WD, "The House at Vyazma" by Simonov (thanks for sharing it) reminded me of something a bit more recent, in its sense of place sanctified by human solidarity. Van Morrison wrote it. It's a slow and deliberate piece with a beautiful chart for horns.