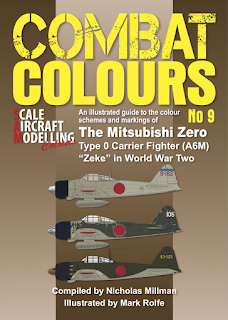 
Page 3 - Photo - incorrectly duplicated caption from photo on page 2. The caption on page 3 should read as follows:-

"The first A6M2 captured in China in November 1941 was one of two from the Tainan Ku detachment of the 22nd Air Flotilla Fighter Unit which force landed in bad weather on the Luichow Penisula."

Page 4 - Colour Chart 1. As printed the colours are distorted. Please contact the author by email to request a PDF version of this chart (free of charge) showing the correct colours.

Page 7 - Wing Schematic. The outboard red stencil line on the flap is incorrect. The flap was outlined red on the inboard, front and rear edges only. This also applies to the profile plan views.

Page 9 - Colour Chart 2.  As printed the colours are distorted. Please contact the author by email to request a PDF version of this chart (free of charge) showing the correct colours.

Pages 11/ 12 - Text as published: "The operational requirements for a longer range were then incorporated into the improved engine design with a reversion to the original longer wing (but without folding tips) to accommodate additional fuel tanks in the outer section and aileron balancing tabs to reduce the control forces on the longer aileron". In fact the A6M3 Model 22 retained the folding wingtips. Even some Model 32 retained part of the folding mechanism inside the wing structure such as the handle bar and associated access hatch. I am grateful to Ronnie Olsthoorn for this confirmation.

Page 14 - Upper Photo. A6M2 V-110 was not shot down. PO3c Maeda of Tainan Ku ran out of fuel after becoming lost in pursuit of a B-25 from Lae and force landed this Zero on the beach at Otamata Plantation near Marshall Lagoon on the south coast of New Guinea about 80 miles from Port Moresby. He was made POW by Australian forces and survived the war. The rudder fabric was described as having a pale green (similar to RAF Sky) dope applied, over which it had been re-finished with a grey dope common to the rest of the airframe. I am most grateful to Bob Alford and Bob Piper for an interesting discussion of this incident and others.
Page 16 - Profile T2 190. This aircraft was not being flown by Yanagiya during the 18 April 1942 Yamamoto escort mission as stated. Yanagiya was flying T2 169 that day.

Page 20 - Profile 2-2-103. Presumed to be a Nakajima-built aircraft and the airframe colour shown as such, but the presence of the expected white border around the fuselage hinomaru could not be confirmed. This aircraft has been variously depicted with and without the white border which might have been painted out.

Page 25 - Profile UI-105. It is questionable whether this aircraft, long attributed to Nishizawa, was actually being flown by him in the series of well known photographs taken by Hajime Yoshida, a Nichiei journalist who visited Rabaul, Lae, Buin and Ballale during 1942-43. It is not identified as such in Yoshida's autobiography 'Samurai Reisen Kisha' and as he had become friendly with Nishizawa it seems improbable that he would not have mentioned him if he had been the pilot flying his A6M3 Model 22 Zero up close to the G4M bomber in which Yoshida was riding. I am grateful to Osamu Tagaya for this discussion.

Page 26 - Profile 108. The upper surface camouflage dark green should extend over the whole yellow of the IFF strips on top of the wing in similar manner to the outer strips on UI-015.

Page 31 - Profile B1-05. The non-standard camouflage demarcation of this aircraft should have been noted.

Page 36 - Upper Photo. As for Page 25 re Nishizawa attribution.

Thanks for the update, Nick. Very helpful!

Many thanks for publishing these corrections Nick. I'll email you with the intention of seeking the updated color charts and in the meantime incorporate the amendments into the publication.

I would need a color correction on which address I write

Hi, Nick! Where this title can be bought? TIA, Alvaro

You can buy direct from them or contact them about local retailers.

Devoted posts like this make me look forward to your "A6M Zero-Sen Aces 1940-43" even more than I do anyways.

Thanks for these updates.

thanks for all those corrections. Especially the V-110 which I am about to finish in 1:48 (Fujimi).