Art McNitt and Ken Glass have kindly shared these images of Art's lovely Ki-27 model made from the 1/32 scale Special Hobby kit and expertly photographed by Ken. When finished in the overall grey-green colour the Special Hobby model shows off the lovely lines of the Ki-27 very well and has great 'presence'. 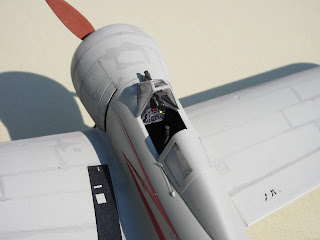 Art, like Ken, has been modelling since the 1950s, with his main focus on military modelling. He retired recently from SRP after a long career in that operation's production facility. His late father was on the St Lo when it was sunk by a kamikaze in the Surigao Strait off Leyte in the Philippines on 25 October 1944. The St Lo, an escort carrier (CVE 63), was part of 'Taffy 3' in Task Force 77.4 under Rear Admiral Clifton A F Sprague. A bomb-laden Zero from the Shikishima unit, one of five under the command of Lt Yukio Seki, crashed into the St Lo's flight deck at 1052 hrs and its bomb set off the torpedo and bomb magazine. The crew began abandoning the St Lo at 1104 hrs and the carrier sank at 1121 hrs with the loss of 114 of her crew and many wounded. The Shikishima unit, composed of volunteers from 201 Ku, was one of four groups making up the 1st Shimpu Special Attack Corps at Mabalcat, the others being the Asahi, Yamato and Yamazakura Units.

Art's model represents the Ki-27 Ko  c/n 91 flown with the sliding portion of the canopy removed by Sgt Maj Isamu Kashiide in the 2nd Chutai of Hiko Dai 59 Sentai during the fighting at Nomonhan in September 1939. The rudder displays the katakana character 'ka'. The 59th arrived late to the Nomonhan campaign and Kashiide claimed only two victories on 15 September, the last day of fighting. He subsequently graduated from the Army Air Academy with the rank of Lieutenant  and went on to become a noted ace against the B-29 during the air defence of Japan, claiming seven of the bombers shot down whilst flying the Ki-45 Toryu with Hiko 4 Dai Sentai. According to early references the red lightning flash represented the 1st Chutai of the unit with the 2nd Chutai using black or blue-black and the Sentai Hombu using green for the insignia, but recent kits, including Hasegawa and Special Hobby, have depicted it as red. 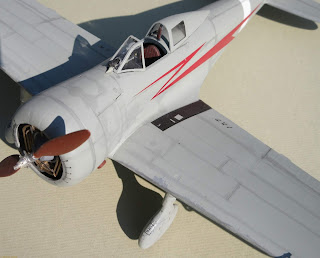 The 59th was formed under Lt Col Issaku Imagawa with two Chutai at Kagamigahara in July 1938 from the 1st Hiko Rentai with the Ki-27 or Type 97 fighter* (Kyu-Nana Shiki Sentoh-ki - 九七式戦闘機, abbreviated as Kyu-Nana-sen - 九七戦) as original equipment and was only increased to three Chutai strength in September 1942. The 15 September 1939 engagement was its only battle honour for Nomonhan in which it claimed 11 enemy aircraft shot down for the loss of six pilots from the 1st Chutai, including the Chutai leader Capt Mitsugo Yamamoto, when it was 'bounced' by fresh Soviet fighters as they pursued the survivors from the first encounter. Three other 59th pilots who also claimed two victories each went on to distinguish themselves as aces - Yasuhiko Kuroe with 30 victories, Katsutaro Takashi with 13 and Takeomi Hayashi with nine. The unit was one of the first to re-equip with the Ki-43 in 1941 and is well known for reportedly displaying the prominent lightning flash insignia on the natural metal fuselage of that aircraft. By the time of the Pacific War its camouflaged Oscars were displaying less ostentatious unit insignia of a single diagonal band in Chutai colour on the fin and rudder with similar spanwise bands on the upper surfaces of each tailplane, a form of marking which continued to be used by this unit until the end of the war.

Art used Testors ModelMaster IJA Grey-Green for the overall finish with dirty thinner applied to the panel lines and some silver paint to represent chipping. The prop and engine face are crisply molded and look good on the finished model, enhanced by photo-etched framing supports inside the cowling. Exhaust stacks are appropriately deep as molded. The kit decals were used which were thin and settled down well into the very fine recessed panel lines, with many tiny stencils on the airframe. The open cockpit showcases interior details. Art applied a pre-painted photo-etched seat belt to the seat pan and did a good job mixing a representation of IJA # 3 grey-indigo colour for the cockpit interior.  Ken first photographed this model in 2014 but these images were taken recently, luckily he thought as Art usually gifts his completed models to his grandchildren.

With special thanks and very best wishes to Art, and special thanks to Ken for sharing these images. Art is going through a rough time at the moment but is steadfastly and admirably determined to continue his modelling in the face of it. Aviation of Japan is pleased and privileged to be able to share his enthusiasm and expertise. 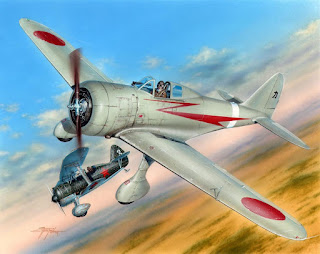 * In the Japanese Army the protocol was to articulate the type designation as 'nine-seven' rather than 'ninety-seven', and for all other Types.

What a beautiful model of an elegant aircraft. It captures the simple clean lines so well, great workmanship on this, Art!

I hope your troubles pass soon and we get to see more examples of your great skill.

A beautifully rendered model. I hope and pray your troubles pass on quickly.

Sadly more and more kit producers are "seeing red" and are discarding previous colour research in favour of the black arts of seeing colour in black & white photos (thus: dark grey equals red... right?). Tamiya's recent kit with Kobayashi's Ki-61-I Tei is another one suffering from this.