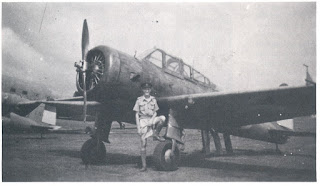 In the mid-1970s a letter from former Far East Bomber Command (RAF) Flt Lt A D Douglas was published in Air Enthusiast Quarterly Number Three (undated). The letter was in response to an article on Indonesian aviation which had appeared in Issue Two and included photographs and his contemporaneously recorded notes describing three Tachikawa Ki-55 'Ida'/'Tjukio' aircraft in Indonesian markings which on 23 April 1946 had arrived at Kemajoran airfield, Jakarta (Java) where he was serving as Flying Control Officer. These aircraft brought the first Chief of Staff of AURI (Angkatan Udara Republik Indonesia - Air Force of the Indonesian Republic) Komodor Udara Suryardi Suryadarma and a Mayor Jenderal Sudibyo from Maguwo, a landing ground on the eastern outskirts of Yogyakarta, Java, for a meeting with officials of RAPWI (Recovery of Allied Prisoners of War and Internees) which was already involved in mercy flights across Java using a mixture of Allied and Japanese aircraft. AURI had been established only two weeks previously from the Air Service Volunteer Corps, part of the Indonesian People's Security Force (Badan Keamanan Rakyat) formed the previous year. The notes are too interesting to remain buried in an almost fifty year old journal and are reproduced here with acknowledgement and in gratitude that officers like Flt Lt Douglas took the time to record such details for posterity.

"T4 swung off the runway on landing and the starboard undercarriage collapsed damaging the wing. Upon examination it proved to be the hollow section oleo leg that was corroded from the inside  almost three-quarters of the thickness of the metal. No one was injured. This plane is now on the scrapheap with other Japanese aircraft. One machine gun was carried with the breech inside the cockpit on the starboard side firing berween the cylinder blocks. No ammunition was carried. The gun proved to be a Vickers 1935 model belt fed 0.303-in (7.7mm).

"T5 made a very poor landing and very nearly crashed on take-off as the pilot tried to 'unstick' too soon.

"T6 made a 360-deg ground lopp but the pilot just carried on as if nothing had happened. It made a very poor take-off the following day.

"All were piloted by Indonesians. Very poor condition all round. Cowling, wings and even the cockpit cover were covered in oil and no attempt made to clean it off. Dual control fitted. All instruments gathered on port side. Many of the instruments are missing. Bomb rack for 500 lb (227 kg) bomb under the centre of the fuselage and provision for four small incendiaries under each wing. Ring mounting in rear cockpit and no gun."

These intriguing details suggest almost a hybrid Ki-36/Ki-55 with a tactical rather than trainer paint scheme. The aircraft appear to have Indonesian roundels in six positions and a rudder painted in red over white national colours. The individual alpha-numeric aircraft identification number  - 'T' for Tjukio - appears on the fin in relatively small letters in red (?) with no hyphen. Another Indonesian 'Ida' (shown above) has the alpha-numeric designation 'T' -above '08' in white on the fin.  Other photographs of T6 at Kemajoran which appeared in a specialist Indonesian publication from 1986 and film footage of the incident suggest a sparse mottle and a paint finish heavily weathered and 'chalked'. The dark blue green of the mottle, rather than olive green, is noteworthy but consistent with other evidence. The blue-grey description perpetuates uncertainties and blue-green perception complexities regarding the appearance of the standard Army grey green paint, especially as the paint tended to 'chalk' in service towards a more flat or matt, lighter blueish-grey, but bear in mind that, for example, extant paint from one Ki-45 manufactured at the Akashi factory in June 1944 measures as a Munsell 'B' - Blue - close to FS 36320 in appearance. There are similar examples of blueish-grey paint on the Ki-27. Some of this blue-green subtlety may be appreciated from the Gunze paint 128 Gray Green when applied, whereas Tamiya XF-14 J.A. Grey has a stronger and brighter yellowish-green appearance, more towards RAF Sky.

The aircraft were without spats or spinners but unfortunately the photographs do not reveal the presence or absence of ventral windows. The armament described was probably a Type 89 Kai fixed machine gun, being a license-made Vickers Class E machine gun manufactured at the Kokura and Nagoya Army Arsenals.

Hat tip to Jacob Terlouw for kindly alerting me to some excellent IMW (Imperial War Museum) film footage of the Idas at Kemajoran here.

Thanks for this article Nick. It made me pull out my own copies of the Air Enthusiast Quarterly and read the whole text. Long fogotten and very interesting! I would date the issue of the initial three numbers of AEQ to 1976, as I remember reading No.1 on the beach on Ischia on my first vacation after I had joined the Air Force. It contains very neat articles about the Wackett Woomera and the Brewster Buffalo. These magazines were great because they covered less-known aviation facts.


Hi Nick,
Thanks for posting this!

The IWM has also footage on this subject-see JFU 583 "Indonesian leaders arrive by air at Batavia"
the first part of the footage is familiar to me but the second part I'd never seen before- it is about the plane with the broken oleo leg. A must see!

Thanks both. To Michael for your recollection of the probable AEQ publication year and to Jacob for the heads up about the IWM footage, new to me. I've now added a direct link to the article.

Thanks for sharing, Nick & Jacob.

Very interesting post Nick! As a Dutchman, I always have a special interest for Japanese aircraft used in Indonesia.

Accounts like these seem to confirm that, although a number were captured, the Indonesians would probably have been unable to operate the Ki-61 "Tony", being a much more complex machine with its troublesome liquid-cooled engine.

Thanks for sharing - a very interesting read!