Sally at Yontan by Harvey Low 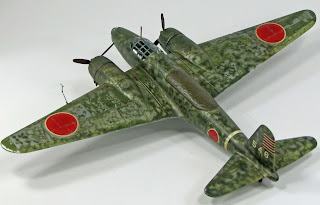 It is a great pleasure and a privilege to be able to share here this article and images by Harvey Low of his 'Sally at Yontan' superbly modelled from the 1/72 MPM kit. In December 1998 Harvey published a very fine cut out and keep paint guide Special for Japanese Army Air Force aircraft for the 'Color and Camouflage' series in the magazine FineScale Modeler, with valuable tips and colour photos of some of his excellent models. I cut mine out and keep it, still. Over to Harvey then:- 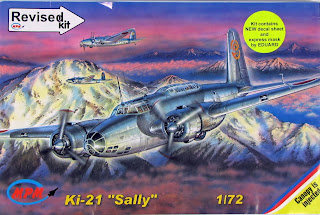 One of the lesser known and shown models on the scale model tables is the Japanese Army Ki-21 'Sally' bomber. The reason for this obscurity is simply the lack of an available and reasonably priced kit as of 2021, with the first being released nearly 50 years ago! The only kits of the Ki-21 are the 1/48 vacuform kit from Sanger (you should become 'religious' to tackle that one) and the 1/72 kits from MPM and Revell-Takara Japan. All three are rare, difficult and costly to acquire. There are smaller offerings in 1/144 from Hasegawa (a reasonable kit), as well as more toy-like offerings from F-Toys and Cafereo. Finally Kora makes a conversion set to backdate the MPM and Revell kits from a late to early model (with noticeably smaller engine nacelles). However after attempting this conversion myself, I was highly disappointed as after installation the engine nacelle resin parts are at an odd angle that does not match any photos of how the real aircraft looked like (too high of an angle resulting in the propellers pointing upwards and very difficult to correct without significant wing modifications).

This model is the 1/72 MPM offering released in 2001. It appears to be a copy of the Revell-Japan kit that was released way back in 1975 and re-released in the 1980’s by Revell-Takara. That kit has not seen any release since, with a rumour that the original molds were lost or damaged. The Revell kit was and still is a jewel to build with fit like a modern Tamiya kit, and well ahead of its time when released with fine recessed rivets and beautiful surface detail. Just ditch the original kit decals. I have built three! Two versions can be built from both the Revell and MPM kits – dorsal turret vs dorsal greenhouse with a unique interchangeable dorsal spine part to allow choice between both options. However the MPM release is not a good kit and much less stellar than the Revell offering. It replicates the errors of the Revell kit but is more difficult to build as it is/was a limited-production regardless release 25 years after that kit. For example there are no locating pins or positioning spars to assist in parts alignment including the cockpit floor. Of note, MPM released two box-art versions showing clearly both early and late engine variants. However, both kits are of the late 'IIb' version! The only redeeming features of the MPM kit is the beautiful resin cockpit, decals by Propagteam, and some releases including an Eduard canopy mask. These features persuaded me to try the MPM kit for this model. Both the MPM and Revell-Japan kits however, suffer accuracy issues from a shallow canopy, to slight shape problems with the wings. Nonetheless, they are acceptable representations of the 'Sally' until we get a big manufacturer to produce an accurate kit to fill this last huge gap in important JAAF bombers! 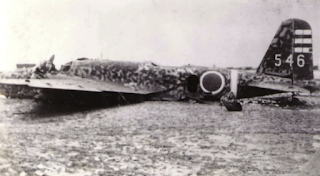 Photo Source: Mark Felton Productions
The Aircraft and Mission
This model represents special attack aircraft Kitai 21-IIb 'Sally' # 546 (shown above) from the 3rd Dokuritsu Chutai carrying paratroop commandos of the Giretsu Kuuteitai (Heroism Airborne Unit). References confirm tail codes of other aircraft were '156' and '138' in the same style markings. The aircraft was specially modified to carry ten commando suicide troops. In the planned attack on 24 May 1945 to destroy B-29s on US airfields on Okinawa, this specific aircraft “546” was only one of eight bombers to successfully crash-land wheels-up on Yontan Airfield, unloading ten Giretsu commandos, who  subsequently destroyed several US aircraft and a fuel tank. All commandos on this raid were killed – whilst only three US soldiers were killed. The ultimate fate of this aircraft is unknown, although brief film footage clearly shows it being hauled away by US troops. Mark Felton Productions does a short but exceptional video about this mission. 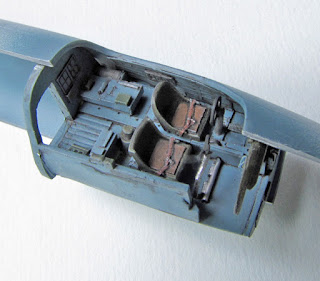 The Model
First, I chose to paint the interior a blue-grey, by mixing Tamiya XF-80 Light Gray with XF-23 Light Blue in more or less equal amounts. Realising that these interior colours were eventually transitioned out to more olive drab interiors by 1943-44, I assumed that the sacrifice of such aircraft perhaps left their original colours in place but that is my assumption only lacking any references I had at the time. 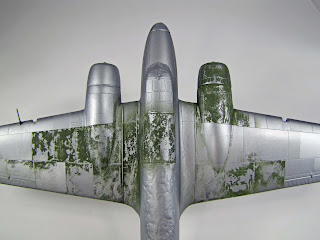 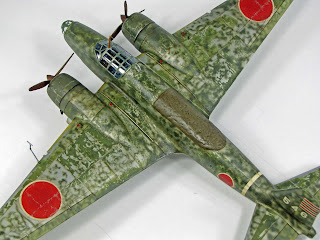 Inspection of existing photos and film of this aircraft show a typical olive/dark green camouflage over what I interpret as all natural metal finish. The NMF was achieved by spraying on various shades of aluminium by Alclad - White Aluminium (ALC106), Polished Aluminium (ALC105), and Dull Aluminium (ACL117). While no clear photos exist of the topsides of this aircraft and thus the exact camo pattern, I interpreted it as a multitude of different patterns (perhaps applied by different aircrew at different times). The technique is to use different shades of paint, applying different spray patterns, and using the hairspray-technique to “stress” the paint in certain areas to simulate flaking and worn paint. 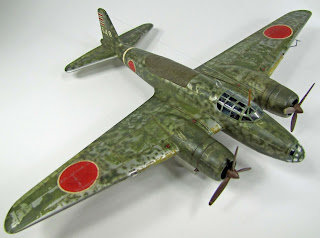 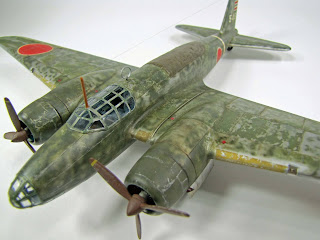 Of interest in the photos and the Felton video, is the appearance (or lack thereof) of the dorsal greenhouse on the aircraft carrying the commandos, with only an opening corresponding to the exact shape of the greenhouse canopy. I assume this to be modified to permit the commandos to exit the aircraft quickly(?). I have not found any clear photos or references to confirm this, and only period photos and less clear film stock showing some sort of cover over the top as it was inspected by US troops. I assume it was either a crude aluminum cover of some kind (not fitting well) or possibly a quick field modification consisting of a tarpaulin. Either way, the cover seen in old footage was clearly not the same colour as the rest of the camouflage. 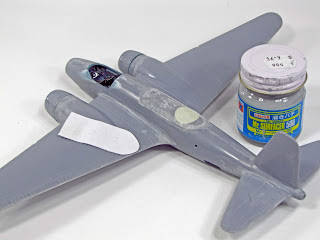 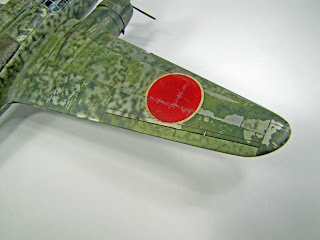 Therefore the rear greenhouse/gunner deck was removed and replaced with a styrene part covered with tissue paper and textured with Mr Surfacer 500, then painted to simulate some sort of canvas cover of my own interpretation. Light washes of Windsor-Newton 554 Raw Umber, were applied. The tail markings appear to be red stripes (again my interpretation) with white outlines. Photos of  # 546 show the red has been torn away showing only the white bands, but photos of these aircraft prior to departure clearly show the coloured red bands in place. Finally references note and show clearly that all armament was removed from these 'commando' aircraft to save weight in order to accommodate the Giretsu troops, so none are included on my model.  Other modifications to the MPM kit include: 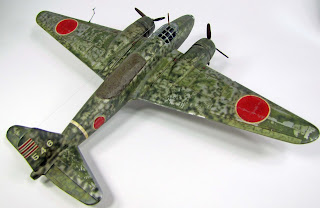 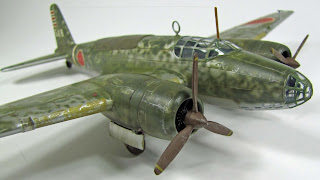 With very special thanks to Harvey for sharing these images and details of his evocative and excellently crafted model, the first of many it is to be hoped. 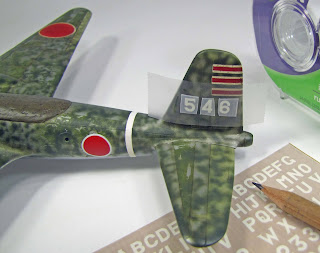 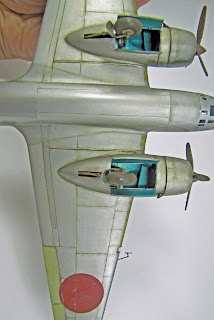 This is indeed very special and very well built. The worn camouflage looks ultra-realistic, the effort put into this scheme shines through! Thanks also for the background story which was unknown to me. Great information!

Beautifully executed model, thanks for sharing it with us, Harvey.

First of all thanks Harvey for allowing us to see this build and thanks to Nick for posting this on this your blog. I am absolutely stunned by the intricately rendered weathered/ ad-hoc/ multi- colored camoflage on this suicide Sally. A truly realistic look in all regards of an aircraft we have all seen pictures of but your model really breathes life into this historic episode. Bravo! I have always thought the MPM kit to be the poorer cousin in many respects to the Revell kit from which it was so obviously copied and though I have built the Revell Ki-21 I have not had the guts to try the MPM kit as I can see the challenges awaiting one when cutting sprue on it. I commend you on a superb result. Nick, thank you again for informing and entertaining us all with your blog. You are the man!

Simply brilliant and extremely well done in every aspect…the use of multiple camouflage patterns was so very clever and effective!

Also, to note, it's a bit ironic that the featured MPM model has now become equally rare and expensive as the other version that were mentioned

Bravo Mr.Low and kudos to Nick as well

I've always thought 546 would make a great subject. But I never thought it would look quite *that* good. You gave that kit more love than it offered you.
Inspiring work, Mr. Low!
Thanks for showcasing it here, Nick.

Both ICM and Special Hobby announced separately their own releases of Ki-21s for 2022. Probably both companies will try to squeeze the most variants and boxes from this project.