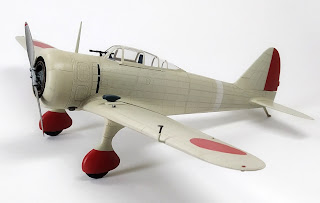 Jason Chetwynd-Chatwin has kindly shared another fine model made from the Hasegawa re-issue of the Mania 1/48 scale Ki-27 kit from 1977, representing a camera-equipped aircraft of the Dokuritsu Hiko Dai 10 Chutai photographed on Kai Tak airfield after the fall of Hong Kong in December 1941. 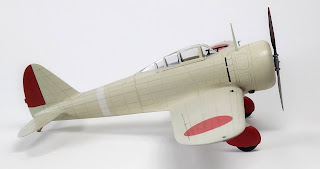 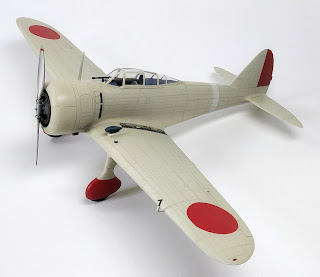 The kit was built from the box except for the addition of seat belts in the cockpit. Jason found the surface detail exceptional for a kit from the 1970s and the overall fit gave no real problems. He felt that the engine and oil cooler could perhaps have benefited from more positive locating features but nothing that was insurmountable. The canopy had a slight pebbly texture which was only somewhat remedied by a coat of Alclad Aqua Gloss. 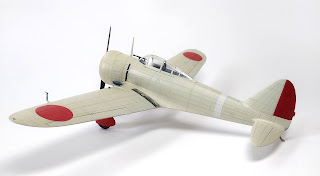 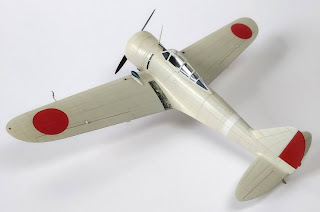 The cockpit interior is painted in a passable approximation of Hairanshoku (ash indigo colour) whilst the exterior replicates the 'creamy grey-green' that these aircraft appear to have worn. Jason mixed the colour from two AK Interactive third generation acrylic paints - 'Grey Green' and 'Luminous Flesh' - in an approximately four to one ratio. Jason was unsure of the colour for the wing camera but opted for a dark blue-black based on the photograph. All the markings are painted. 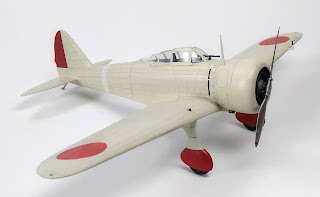 Some of the 10th Chutai's Ki-27 fighters were camouflaged with dark green paint at Taiyuan in the autumn of 1941 before the attack on Hong Kong but this aircraft was an exception. The red-painted undercarriage fairings were the unit insignia with the rudders being painted in Shotai (flight) colours. The black tails which had originally distinguished this unit were changed when Capt Hikaru (or Akira) Kozuki took command on the death of the previous leader Capt Tamio Shimura was killed in action in August 1940. The Shotai colours were reportedly red, yellow, blue and green, with the Shotai leader having a plain coloured rudder, the 2nd wingman having a white horizontal band across the rudder and the 3rd wingman two white horizontal bands. The subject of Jason's model is shown below and was profiled by Ronnie Olsthoorn for the blog article Ki-27 Aces Extra 2 in November 2014. 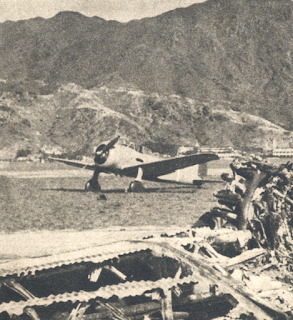 With very special thanks to Jason for sharing these images of his model from his themed project of aircraft  in Hong Kong.

The plain colour and sparse markings highlight the appealing shape of the Ki-27. Great choice of hairyokushoku! This series of Nates is very inspiring. Thanks Jason and Nick.

Another beautiful model and the rare variant of "Nate". Thanks for sharing.

Well Done both, Jason!! and Nick!!

A very neat, clean and simple scheme that just looks fantastic. Nate fest is THE best!

Very attractive and well done model. I agree that the sparse markings allows one to look more at the shape of the aircraft itself. Thanks for sharing with us!

This is a beautiful model! With all the flashy Nate schemes to be had...less is more sometimes. Great job highlighting that surface detail so subtly. Thanks for sharing it with us, Jason and Nick.