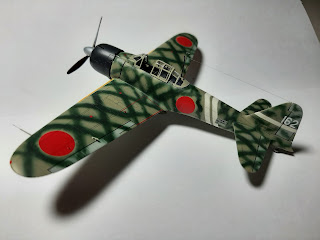 Some more fine Zero modelling, this time in the smaller scale of 1/72 by Marian Holly with a write up of his build. Over to Mario then:-

'This is the 1/72 scale Tamiya kit of the A6M3/3a released in 2013. I don’t subscribe to a notorious cliché that “it’s Tamiya it must be great” but in this case it’s at least the best 1/72 replica of Zero-sen currently on the market. Some people swear by Fine Molds (FM) kits but since I've built both I’d say the FM A6M3 cowling is a bit undernourished. It’s really a tiny bit but it’s visible. Generally fit is excellent but not perfect. The lower wing inserts featuring wing cannon bulges typical for this version require some careful puttying and sanding. The top wing to fuselage joints also required a little more attention than anticipated. 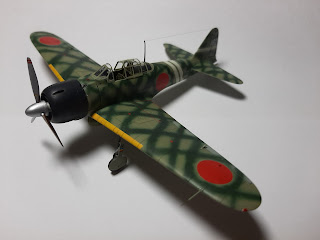 'With this build I went rather overboard with aftermarket parts. I used an Eduard pre-painted set for the cockpit, their photo-etch (PE) for wheel wells and ignition harness for the engine. The idea of showing the flaps down was discarded at the very early stage since pictures of the real thing with flaps down are extremely rare. Besides I feel it just doesn’t look good on the Zero and the same is true of the opened engine cowling. In retrospect all those PE details do not really stand out. It seems that the Zero is not a good subject when it comes to super detailing. I did rivet the whole airframe though and sanded down the ribbing on all control surfaces a bit. It’s slightly exaggerated to my taste. I added the brake lines to the landing gear, from fine solder, scratch built the antenna mast and pitot tube from the brass rod and tube. I do this on every single kit I build as the plastic versions of these parts typically look oversized and besides are just way too fragile. The antenna wire is the thinnest Dai-riki fishing tipper line (9xx). I replaced the sliding portion of the canopy with a Squadron acetate part. The painting of the frames on this part is not my best work. Next time I’ll use painted strips of decal. Canopy design is another “glitch” of this kit. Even though the box contains clear parts to install the canopy closed or open the sliding part is a bit thick and doesn’t conform nicely to the fuselage. In other words, it sticks out and lacks a scale look. 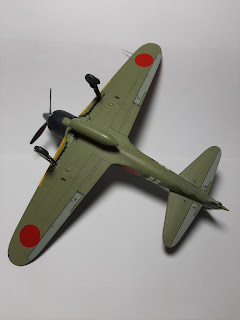 'I am never happy with markings as they come with the standard kit so I chose a subject aircraft from Rising Decals sheet 72074 “ Zero Pt. IV”. The criss-cross field applied green camouflage was irresistible. The plane supposedly belonged to 251st Kokutai at Rabaul in May 1943 and was flown by Lt.(jg) Takeyoshi Ôno. It’s said it was dubbed “Wewak Willie” by Allied pilots who encountered it in combat. For the first time I used AK International Real Color IJNAF dedicated shades which our own Nick helped develop - Olive Gray SP overall, J3 gray for control surfaces and D2 green for the camouflage. All other colors for detail painting came from Gunze Mr. Color line. Even though I fully trust and like the shades, I was not very happy with the results. The paint doesn’t give you that nice, smooth semi-gloss finish you get from Gunze or Mr. Paint, and I used their original thinner. Besides, and that’s what really ticked me off, if you do touch ups with a brush it will result in a different shade! Some other modelers experienced the same occurrence.

'Overall, I’m quite happy with the finished model. I tried some new approaches and products which I may, or not, apply to future builds. I’m currently working on a pair of Zeros that will feature similar “blotchy” and “streaky” camouflage and I intend to share the results with you (relatively) soon.' 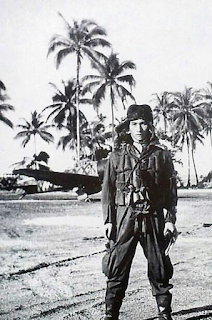 The distinctive cross-hatched pattern of dark green camouflage replicated on Mario's model and as applied to some Zero aircraft operating from Rabaul in early 1943 gave rise to a contemporaneous USAAF legend of a Japanese ace known to them by the sobriquet “Wewak Willie” who reputedly flew a checker patterned Zero. The 49th Fighter Group pilot Sammy Pierce described how the Zero was not really painted in a checkerboard design but that its camouflage pattern just gave that effect when it was seen in the air. The 21 year old Takeyoshi Ôno (shown above) flew his initial combat tour in the Zero with Tainan Ku, claiming his first victory over a P-39 (unconfirmed) whilst flying CAP over Buna on 27 August 1942. He returned to Japan in November 1942 but undertook a second combat tour with the re-designated 251 Ku from Rabaul in May 1943, at times leading the unit. He was killed in action over Rendova on 30 June 1943 with claims for eight victories. 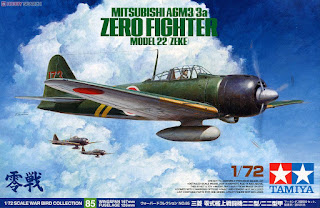 With very special thanks to Mario for sharing these images of a striking looking Zero model and an insightful write up, as well as for his patience in waiting for them to appear here.

Simply great - both the model and the story!

Beautiful build and paintwork, Mario! And a very interesting article. You rose to the challenge of matching that photo! Thanks for showing it to us, Nick.

Great story and realisation of the rare variant. Thanks for sharing.

Really nice work Marian, this is a finish I could not achieve in 1/72 scale. . For thinning AK RC I prefer to us Mr Levelling thinner, which you probably already have if you are using Mr Color paints. Looking forward to your next build.

Exceptional work Mr.Holly!...along with a fascinating history of "Wewak Willie"...and yes using brass tubes for pitots in 1/72 is definitely the way to go.. A small touch that makes a big difference

Thank you all for your nice comments. I'm glad you like the build. I have some other Zeros in the pipeline in rarely (it at all) seen camouflages. Stay tuned!

Very cool to see the checkerboard pattern applied to your Zero Marian. The photo to back it up with the pilot really brings to life a scheme that would seem unlikely. Interesting to me that the JAAF also used the X- shaped camo as seen on Helen, Sally and I think I've seen a Lily too. Never seen that style blotching in any other air forces that I can recall. In any case a lovely Zero. Looking for a similar interesting camo for the Tamiya Zero 32 thats on my bench.

Tomodachi,
Great work on Zero! I enjoyed seeing at MosquitoCon 29 this past summer.

I go away for a while and come back to this.
Absolutely beautiful Marian! I've got a pair of Tamiya Zeroes on the bench that are stalled and you've inspired me to get back on them.
As you said, these kits aren't perfect, *BUT* they are good, and you're right that they just don't lend themselves to super-detailing. The problems I've encountered on this build are of my own making.
I'm still on the fence about using the Eduard p/e on the landing gear bays.
I am going to use two schemes from Rising.

Excellent interpretation of this unique scheme!
Perhaps I should consider illustrating this one... ;)