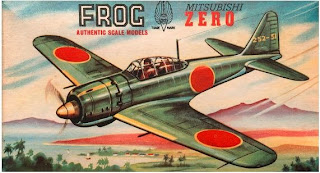 The iconic Frog Zero-Sen model dates from 1959 and survived until at least the 1990's as a Revell re-issue under their acquired Matchbox logo. It was originally intended for discontinuation in 1968 but the mould was cleaned up and "improved" by AMT that same year and the kit soldiered on (although as far as I know it was never issued in the USA under the AMT logo). The later re-issues were not as clean as the earlier ones, which had engraved panel line detail and markings positions. The raised lines and grey "soapy" plastic of the post-AMT revision seem retrograde changes viewed in comparison to a mint duck egg green or sky blue plastic pre-1968 kit.

According to Lines and Heelström* 45,000 kits in the original Type D yellow sided box (as shown in the heading image) were issued between 1959 and 1965. The kit was numbered 392F but there is an unconfirmed possibility that some of the later boxes were numbered F392. 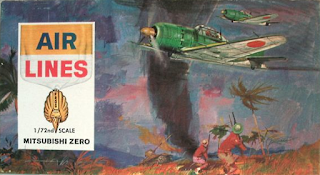 In 1966 the kit was released as 5903 in the USA (shown above) in their Air Lines range by Frog's distributor Lines Bros Inc. This kit featured new box art by Jo Kotula as shown above.

Between 1965 and 1968 100,000 kits numbered F392 were issued in the Type F1 black series box (shown below) featuring the new Jo Kotula box art with a colour profile and plan on the reverse. This was the last issue of the kit in the original crisply moulded duck egg green plastic with engraved national insignia. 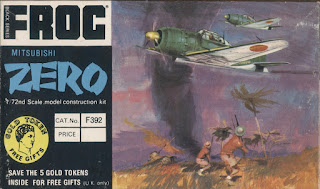 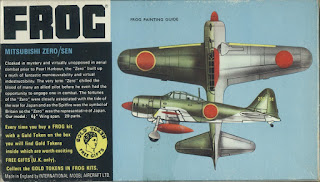 From 1969 to 1974 no fewer than 260,000 kits were re-issued as F219F in a plastic bag ((Type J2) with a cardboard header (as shown below) with new art by Eric Carless (?). This was the re-moulded kit in grey plastic with the engraved insignia positions removed and raised panel line detail. The kit now played fast and loose by offering two markings options with decals for a dark green aircraft of the "Atsugi Kokutai" in Japan, 1944 and a speckled bird of the 251st Kokutai over Bougainville in 1942 without specifying the variant sub-types. The tail code on the Atsugi option seems to represent the Katakana for Ah-Tsu (アツ-144) which is a code that Donald W Thorpe attributed to Atsugi in his 1977 book**.  The 251st Ku tail code U1-150 and speckled camouflage scheme suggest an A6M3 Model 22 but the '5' in the code is curiously printed smaller than the other characters. 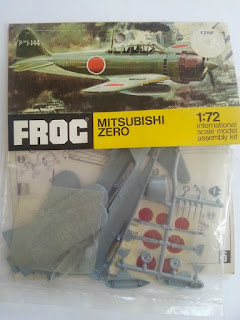 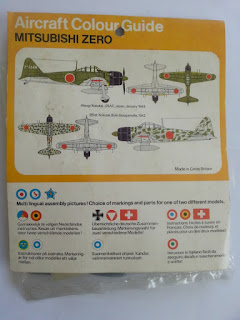 The final Frog issue, as F219 from 1974 to 1977, featured a new white box (below) with the same artwork and 65,000 kits are reported to have been released in both conventional separate lid and tray type H boxes. 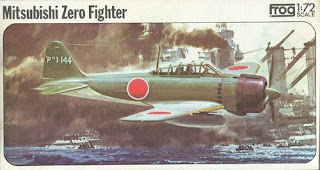 The very last Frog Zero issues, from 1976 to 1977, were in the company's characteristic twilight blue plastic, representative perhaps of the Soviet clouds already darkening the future of this most British of brands. When those various executives and bean counters devised the "cunning plan" to ship the molds to the USSR, to be paid for by the free production of Novo kits for sale in the UK, it was a heritage  offence typical of that era. What Frog had come to represent was not valued and was believed not worth preserving in a national sense. Now of course the original Frog kits increase in value year on year whilst the "Frog spawn" still reappearing under various Russian and East European logos is but a pale imitation of its glorious past. Anyone seeking to judge Frog quality from the 50 year old much-abused retread of the Zero-Sen should examine an original first-issue kit and, preferably, build one! 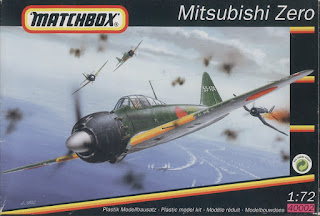 The Zero mould, and its Rufe stablemate, did not make the one way journey into the neglect and convoluted dealings of the Soviet state toy industry, being rejected along with other models of Axis aircraft. Instead they were acquired by Revell from whose factories they re-appeared in various guises. The Zero was re-issued in 1996 under the Matchbox logo acquired by Revell (as shown above) with a new decal sheet for an A6M5. 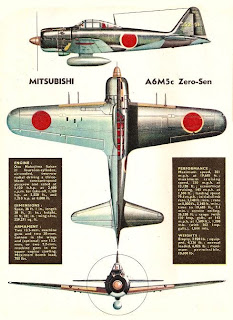 I often wondered where Frog's original fanciful colour scheme and markings originated. The yellow-bordered hinomaru, those yellow stripes on the nose gun troughs and the absence of a black cowling, the suggestion to paint the undersides "light green or sky". Then I discovered a colour four-view (above) in the December, 1956 edition of RAF Flying Review magazine (Volume 12 No.4) accompanying an article entitled "I Designed the Zero" by Jiro Horikoshi. Frog even used the identical tail number '252-51'! 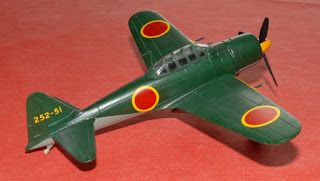 The Frog kit has no interior and no wheel wells, typical of its era. Although intended to represent the A6M5c there were no cowling injector style exhausts and the twin gun barrels in each wing were identical. Nevertheless I loved her then and I still love her now! I can remember the first one I ever encountered being built by a pal on the highly-polished table in his parents dining room (!) and arguing with him about whether the drop tank was meant to represent a bomb.

Images credit: Mainly Straggler's collection; some box art from web; Model photograph from web - if it's yours please holler and I'll be pleased to credit it!
Posted by Straggler 脱走兵 at 17:17

The Type H Box is the one that I remember purchasing on a School Trip to Walsingham !! I also recall making the original Matchbox kit when it first came out, which IIRC was moulded in an orange and white plastic.

Many thanks for sharing this information.
FROG do have a special something about them.
I recall the bagged Zero kit being one of several which were distributed to myself and siblings as Christmas presents in the early 70s.
Now I think about it, it was the focus of FROG upon getting the shape and form of their kits right, and not obsessing with trends such as over applied riveting, which made them different and distinct....