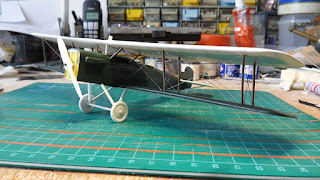 The skilled and resourceful John Haas has kindly shared details of his latest scratch-built project - the Navy Type 10 Carrier Reconnaissance Aircraft, Mitsubishi 2MR1 in 1/48 scale, again inspired by the Choroszy Models catalogue. The type appealed to John as it reminded him of the Boeing DH-4M, a moidel of which he had built with much pleasure years ago. Again information on this type was sparse and John had to resort to one small three-view drawing and a few photos. 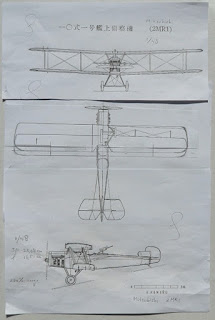 So, over to John for his build report:-

'First I tried to enlarge the drawing to 1/48. The result was not great, barely usable, but at least I could determine the dimensions of the large parts. The smaller details I had to derive from the photos. The fuselage I again constructed according to my tried and tested method, the main parts from thick plastic sheet and the sides covered with thin 0.5 mm sheet. The interior is really guesswork, I could find no information, so I built the interior according to what was typical at the time. 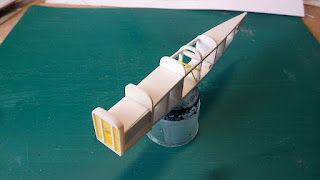 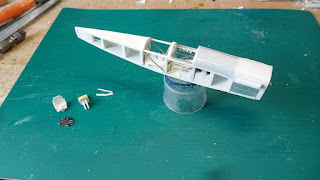 'The wings were built using Mr Harry Woodman's technique. I thought the leading edges were straight, but just in time I discovered that they had a slight sweep-back which was not clearly visible on the drawing. After drilling a lot of holes for the wingstruts and the rigging, I could glue the underwings to the fuselage. The upperwing was another story. The short fuselage-struts are slanted backwards, so I could not follow my usual way of placing the wing on these struts. I had to fabricate a kind of construction- rig to hold the upperwing in place, after that I could glue all the main struts between the wings. And all those loose ends of the rigging did not help either. But perseverance wins and after several attempts everything sat in place. 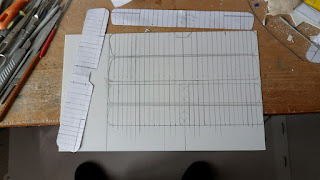 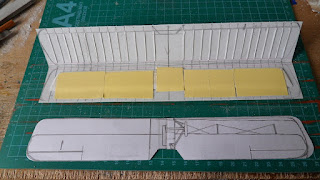 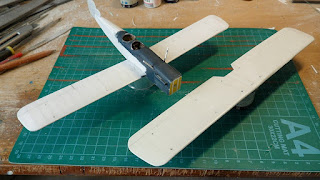 'Next I could make the tail feathers and parts for the undercarriage. The wheels were again turned with my home made lathe. I searched my spare box for the right prop, but you guessed it! I had to make one myself :-). 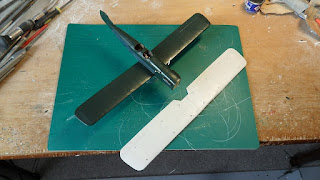 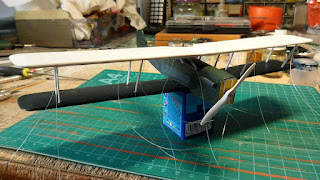 'The painting was done between several building stages. I concocted the IJN Green by following Nick's recipe of Humbrol Green 195, Gloss Brunswick Green 3, Oxford Blue 104 and some Black.The under surfaces are painted Revell Light Grey SM 371. 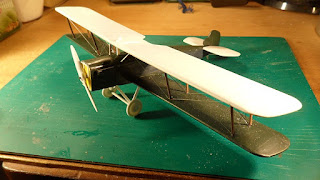 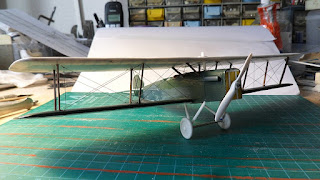 'I hope you enjoy my report with the photographs, so up to the next one!'

Mitsubishi's 2MR1 was designed by Herbert Smith, scaled up from the Type 10 Fighter, and the prototype flew successfully from the Nagoya factory airfield piloted by William Jordan on 12 January 1922. The IJN quickly adopted it as the Type 10 Reconnaissance Aircraft with production commencing that same year and continuing until 1930 with a number of different configurations and a total of 159 constructed. After the type's operational service some were released to civil use for communications and liaison flights, etc., mainly by press organisations.

With special thanks to John for sharing yet another gem, no kit required!

Again a fantastic scratch-build John! I've seen many from you but still don't grasp how you get them so clean and fitting so well. Thanks for showing us Nick.

I am always amazed at true "modeling skill" like this. To me scratch-building anything (a/c, armor, vehicles, etc.) is the height of the hobby in terms of skills.
Well done sir!

Thanks for showcasing this rarity, Nick. It's great to see a new post. John, your work, once again, looks great and is an inspiration. Life is not fair: you deserve better drawings! Imagine the labor, problem-solving, and industry that went into the aircraft, and one hundred years later...not much to be found about it!

Amazing craftsmanship! Thank you for sharing

Another outstanding achievement ...and all from scratch!

Thanks to John for sharing this masterpiece and to Nick for everything else :)

It's always a treat to see a new scratchbuilt model come to life! Great work John!