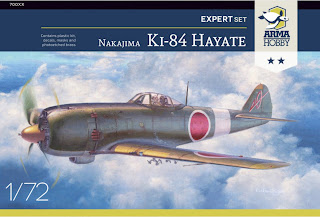 A hat tip to Warren for kindly alerting me to this forthcoming surprise release by Arma Hobby of a new Nakajima Ki-84 Hayate kit in the divine scale. Judging by their previous kits it should be a good one and will relegate previous kits in this scale to secondary consideration.

The 'expert set' kit due out in April this year offers Ko or Otsu versions of the fighter with photo-etch and a comprehensive decal sheet with options for a well-chosen variety of schemes and markings. The box art nicely reflects Revell's classic 1966 kit in 104 Sentai guise as painted by Brian Knight, but correctly depicts the yellow trim and wingtips of 2nd Chutai leader Lt Mitsuo Tomiya's Hayate.  Other markings options are as follows:-

Follow the link above to see the profiles of these subjects at the Arma Hobby website. Thoughts on Hayate schemes were featured at the blog in November 2013 and November 2014 but a consideration of the reticulated scheme was never completed. Arma Hobby's new kit might inspire that.
With thanks to Warren for the heads-up on this new and welcome kit.
Update: An in-box review of this kit here with sprue shots and other details.

Thanks Nick, I've ordered two. :) Thanks also for your analysis of the schemes, I was wondering about the green vs. olive of the second scheme myself. No doubt that I'm going to have to delve in the paint scheme research before these hit the bench, I'll need your help!
I do think they offered up some interesting schemes right out of the box. Arma has a (good) habit of issuing further boxings with more schemes on their other kits, so hopefully we can look forward to more iterations of these.

Jumpei Temma (you've probably seen his spectacular modeling at Wings of Pegasus http://soyuyo.main.jp/ ) states that this model matches exactly his Ki-84 drawings. If Arma did use his drawings, the least they could do is to send him free samples of the kit.

An excellent addition for the 1/72 modelers. It seems lately that the only Japanese releases are coming out of Europe. Hopefully we will have some built examples posted up on AoJ in the near future.

Excellent news for those like me who missed the Sword releases! Hope Arma Hobby would release more Japanese subjects!

Looks like another winner from the masterminds at Arma Hobby !... Thank You, and please keep up the good work in 1/72 !

Gratitude to both Warren and Nick for the advance notice :)

This is great news, as the mighty hayate deserves a fresh modern kit in 72.
Hope to have it soon at the bench!

Yes Arma Hobby kits rock and to see the handsome Hayate added to their growing range is indeed a wonderful thing. I also pre-ordered a pair. Cant wait to see this one show up on my doorstep.

Great news! Arma Hobby is positioning itself as one of the best kit manufacturers in 1/72 and this Hayate comes in the same vein. Also, the choice of a Japanese fighter should be warmly welcomed. To be honest, when they announced their next kit guess by putting a Japanese floral motif on their page, I knew that the next model was going to be of a Japanese aircraft and indeed I thought of the Ki-84 (and also the Ki-44)... I wonder if we can look forward to more Japanese single-engine fighters from this dynamic Polish team.

This one is certainly a beauty in the box. Thanks for this posting, Nick.