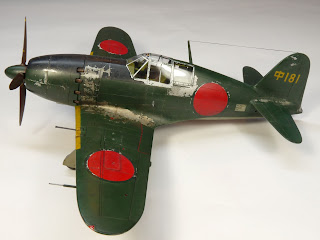 Woody Dubacki's second Raiden model, also made from the Hasegawa 1/48 scale kit, represents 中-181 (Chuu-181) a J2M5 of the less well-known China-based  Chuushi (or Chushi 中支 - Central China) Ku. That unit was established in the Navy reorganisations of 10 July 1944, and was formed on 20 February 1945. It was under the direct control of the China Area Fleet, based in the Shanghai area and also operated some late model Zeros. At the end of the war, the commander was Umezaki Unosuke and the Hikotaicho was Masao Omiya. Woody describes his project as follows:- 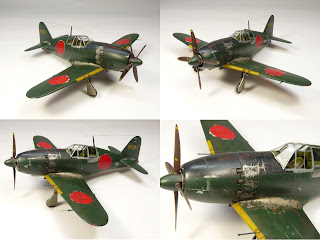 'The build was almost exactly the same as the J2M3, mostly out of the box save for adding some wires, adding or moving levers and parachute loop, cockpit vent, belts and a scratchbuilt radio.  Rivets were added by digitizing a 3 view plan, merging it with the kit's 3 view in the instructions, then designing rivet templates and cutting them on my Cameo 4. 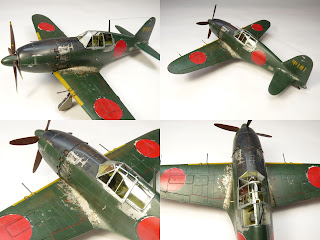 'Paints were AK Real Colors and Mr Color, with a custom mix for the olive grey undersides of 3 parts AK RC 301 RAF Hemp to 2 parts Mr Color C60 RLM02 Grey.  The paint was chipped and weathered to match the existing photos of the aircraft, although weathering was toned down to represent an operational aircraft. 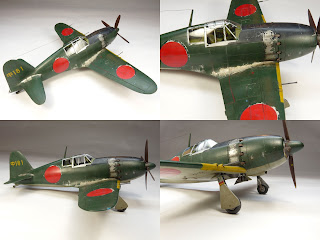 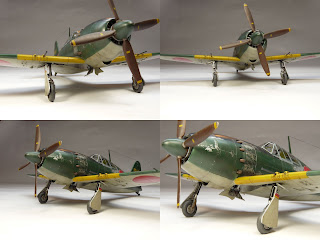 'This was a very interesting build, especially the research and my conclusion that the aircraft number was in fact 181, and not 191, as previously thought.' 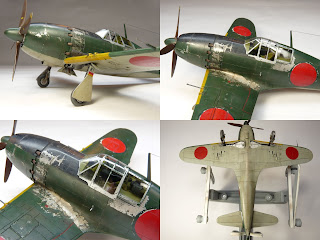 With very special thanks to Woody for sharing these images of another superbly realised Raiden model, and especially welcome for representing one of the lesser known and China-based units.

Again very impressive. I like the white rim that re-appeared around the hinomaru.

How does one make the Raiden interesting, was what I asked myself when building this kit. Personally, I think it's quite an interesting plane, in and of itself (it's become an obsession of mine), but I think that the lack of markings (most are either either 302 or 352 Ku, and the vast majority are J2M3) perhaps make this plane less fun to model. So I decided to find one that was seldom modelled (J2M5) and markings that aren't offered on a kit decal sheet (Chuu 181,although it was very nearly 191 as depicted on the box).

There are still a few more obscure Raiden that I have planned for future builds, of about 70 Raiden listed in my catalogue that I have photographs of, so still many to choose from.

Great looking builds! I have a soft spot for the Raiden and these do that kit real justice. Thanks for sharing!

One of the best representations of a weathered, working IJN aircraft I have seen... inspirational!... and congratulations!!!

Another *beautiful* build, Woody - and a J2M5 for a change. I wouldn't bet against seeing a Raiden from you with the one with the large supercharger on the side one day soon. I like the careful photo study / interpretation behind your models. I'd be interested to know more about the Cameo tool you're using.

After any extended break, I always want to say 'thanks again' for the community you have created here, Nick, where I can see what others who share my fascination have been up to around the world - from scratch-built models to conversions to interesting builds of vintage kits. Along the way there is info and insight into the operations of these aircraft I've not seen anywhere else. I can almost always find that A of J article I remember from a simple search, and taken together these years represent a remarkable archive and trove.

Hi Mark, you’ll be happy to know that I also have a J2M6 on the back burner, it needs a bit of bodywork and then full riveting and paint. As for the Cameo, it’s a crafting vinyl cutter that you can find at Michael’s or similar stores. It is basically a printer but instead of an ink head, it has a blade. The basic Silhouette Studio software will get you simple shapes, but what’s simpler than a hinomaru? Since I use a form of cad software at work, I use it to import scanned decal or instruction sheets and trace my markings and then export the file to the Cameo and cut the masks.

I have also used the cameo to create templates for riveting. I start with a scan of the kit’s instructions 3 view and import another 3 view from a book showing the rivet lines. In the case of the Raiden, the kit and rivet 3 view didn’t jive so I had to adapt it to the kit. Once I have all the rivet lines drawn, I then separate them into X and y axis and then cut them with the Cameo. Then I apply the x axis templates and rivet one line at a time, and then add the next template until I am done and then move into the y axis. The fuselage is the most challenging because of the curves, so I split the vertical masks into small squares and apply them one at a time to create a straight line on a curve.

This is all a fair amount of work, and so I won’t rivet every plane, but I already have the Raiden templates done so the J2M6 won’t take very long to rivet.

Right now I’m working on an Army plane but I will return to finish the Raiden before the year is done. I have a catalogue of about 80 Raiden, 70 of which I have photographs for ( or stills from news reels found in the web) . Unfortunately there aren’t too many J2M6 to choose from, but I have one in mind that has characteristic chipping (I think it’s more flaking) of an operational plane.

Thank you kindly for your 'thanks'! It's nice for my wee part in things to be noticed! ;-)

Two incrediby well done Raidens Woody. I keep looking at them and blowing up the pictures and I am simply amazed. Sure theres only one color scheme for Jack but your research and attention to detail and history is commendable. One of my favorite Japanese aircraft also. Thanks Nick and Woody for letting all of us AOJ fans admire such delightful work in the art of modelling.

Thanks very much Woody for the info on the Cameo cutter.

Your work is inspiring, Woody. Thanks for sharing it, Woody & Nick.