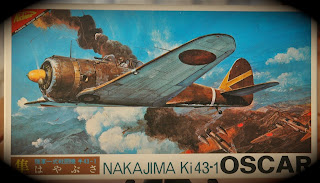 The news that Nichimo - or Nichimoco as they branded themselves recently - is leaving the plastic model kit business after 62 years is rather sad. There must be the possibility that some of their moulds, unique despite their age, will be bought and released by another manufacturer. Let's  hope so. Nichimo's  classic 1/48th scale Ki-43-I Hayabusa 'Oscar' is arguably a better model if not a better kit than the more recent Hasegawa version and has graced many a competition table since it first appeared in the 1970s with that strange brown Shoki-like scheme on the box art. 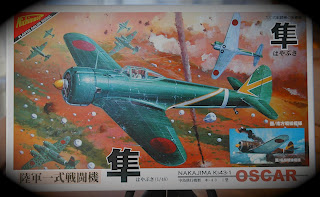 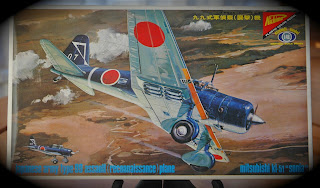 Their Mitsubishi Ki-51 'Sonia' remains unique in 1/48th scale and is another ever popular kit in its much debated blue colour scheme. The box art (as with most other Nichimo aircraft kits) was by Mr. R Nakanishi (b.1934). There is a fine advanced build article of the Ki-51 by Tetsuya Inoue here, honouring his grandfather who was a test pilot on the type for Mitsubishi Heavy Industries. 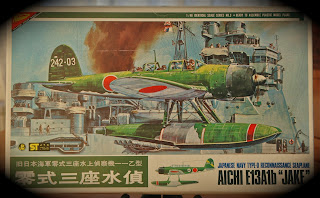 The floatplane Aichi E13A1-B 'Jake' is another unique 1/48th kit and it was recently the subject of an improved aftermarket resin interior set from Lone Star Models (sadly no longer available). 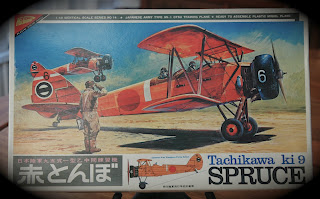 Then there is the Tachikawa Ki-9 'Spruce' (Army Type 95-1 Medium Grade Trainer), another so far unduplicated model of the Army training biplane in 1/48th scale not to be confused with Otaki's 'Willow'. The Ki-9 is a lovely, delicately moulded kit, definitely worth re-issue, which includes an impressive interior, brass wire for rigging, nicely moulded standing and seated crewmen and decals for four flying schools - Kumagaya, Army Air Academy, Tachiarai and the seldom represented Mito. Let's hope we can see this one available again. 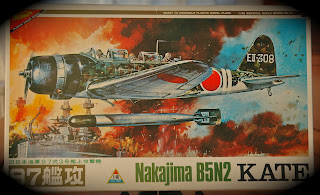 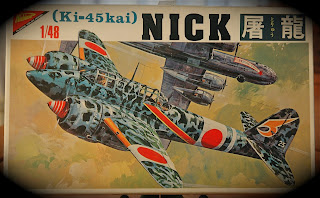 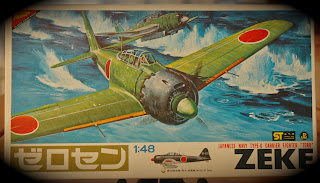 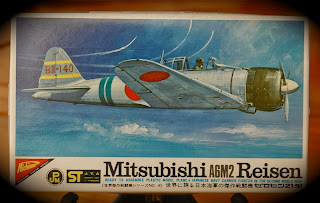 Nichimo's 1/70th scale Ki-61-II Hien from the 1960s has been covered previously here and here and deservedly praised in the context of its time and technology. Their A6M2 Zero and A6M5 to the same scale were available until quite recently in attractive boxes to lure the unwary. The A6M2 is probably better in many respects than some other Zero kits of the same era, certainly besting the very strange looking Aoshima and rather poor Fujimi examples. Although the  evocative A6M2 box art depicts a Hiryu carrier fighter cruising with the canopy open and the pilot watching contrails the decal sheet curiously offers markings only for the well-known Saburo Sakai  machine V-103 of the Tainan Ku. 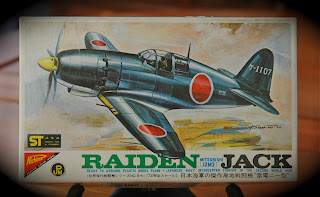 The 1/70th scale Mitsubishi JM2 Raiden with classic K Hashimoto box art was a similarly workmanlike but unappreciated kit, perhaps overshadowed by the 1964 Tamiya example and later by the greatly improved Hasegawa issue. The two unusual markings options in this kit (the other being Yo-J2-34) remain, as far as I know, unique. 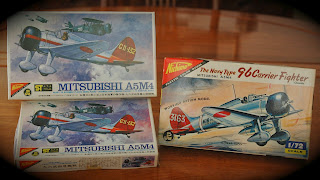 For many years until Fujimi embarked on a new family series of 'Claude' the Nichimo A5M4 was the only game in town for this nimble IJN fighter and has appeared over the years in various boxes, deservedly earning the title of 'classic'. It is last but not least here.

Farewell Nichimo and thank you for your valuable contributions to the genre of Japanese aviation models, maybe gone now but certainly not to be forgotten.

Well said Nick. When I was a teenager, it was the Nichimo Ki-43 and Ki-45 that I discovered as the first 1/48 scale kits past the venerable Monogram Zero. Then Otaki, etc. but the Nichimo kits hold a special place for this 1/48 fan. Thanks for sharing...
Dan

Sad news! As a teen I built many scale models, first 1/72 and then onto 1/48, plus a handful of 1/32 kits which were always dead-cheap to buy around Christmas time!

But the Nichimo 1/48 Ki-45 "Nick", the only Nichimo kit I ever bought, still stands out as the most enjoyable kit I ever built. I don't know why, but I just loved it. The model went together without a fuss, for the day the detail was adequate (I recall cutting out the landing light and replacing it with a chunk of transparent sprue), and it was just so cool to have a 1/48 kit of the Ki-45 - not the most mainstream kit subject. It looked really good between my Monogram F4U-4, Hurricane II, P-51B and Matchbox Fw 190 A-8 (which I understand was actually the Otaki kit). With the vast choice of super-high-quality kits that are available these days, I doubt I'll have another build experience that'll be as memorable as that Nichimo "Nick". :)

Thanks Nick - nice summary of the Nichimo stable we've taken for granted so long. But I'll bet those kits will still get around through the usual channels.

And thanks especially for the link to Tetsuya Inoue's *great* build of the Nichimo Sonia. It's going to be a marvelous model, but the article itself will be an invaluable resource for anyone building the kit who wants to improve it. Beautiful work, Tetsuya.

Sad to see a manufacturer go. I have several Hayabusas, a Sonia and Nick.

Thank you very much for the Sonia build link, great workmanship and inspiration.

Thanks for this posting, Nick. The Ki.43 boxing with dark green camouflage was new to me.

Hi Nick,
I was pointed to this specific and sad post on the modelkitcollecting Forum - you may remember me (tempestfan)from occasional posts on BM.
As I have a UPC and a Nichimo Jake, and both seem to be essentially the same plastic, I wondered whether the Nichimo Jake (and a couple other Nichimo kits) may actually be a Marusan original. The Jake and more so the Hunter and Me 262 (both apparently "based" on Lindberg)are nowhere near the exquisite Ki-45, Ki-43, Kate, and others, but are somewhere in the middle of the reference number range. The first Edition UPC featured artwork by a Japanese Artist (probably) identical to the Marusan. I only have a later boxing with Eidson art, though, so in theory, there could have been two different kits of the Jake boxed by UPC. I confess not having searched your blog if you shed some light on this already - if you didn't I'd be very interested in your views or hard Facts.

I'll put up a blog with the various box arts to see if it gets any responses.