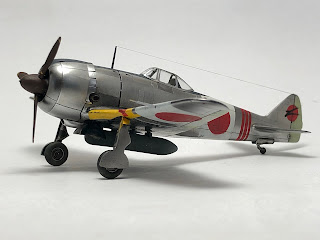 Another shiny Shoki in the divine scale to share. This excellent model is made from the venerable Hasegawa kit, 50 years old but still a viable contender, as demonstrated by Jason Brash. 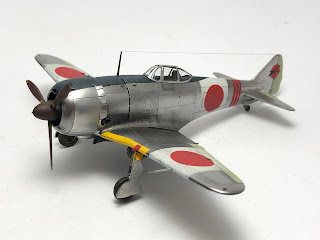 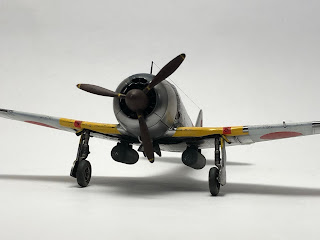 Jason chose a scheme for a 246th Sentai Shoki at Taisho, Japan in the winter of 1944. All markings are painted on as he did not want to use the kit decals. He was originally going to apply camouflage but couldn't bring himself to cover the splendid natural metal finish. He mentions that the exhausts are not that dark in reality but the reflection in the finish makes them look that way. 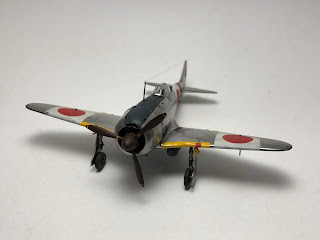 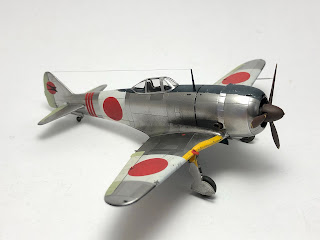 The build was mostly out of the box but Jason added tops to the longer side of the landing gear bays, replaced the pitot tube with a metal one and added seat harness to the cockpit although they can't be seen! The other detail that paid off was dipping the canopy in floor polish for clarity and brilliance. Otherwise the only problem facing him was deciding on a subject and colour scheme. The kit decals were in decent shape but didn't do it for him and he wanted to paint the markings anyway. Jason plans to make a suitable display base for the model in due course. 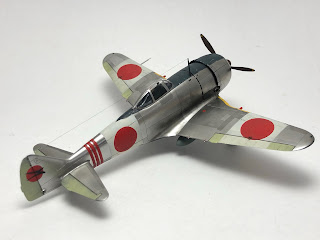 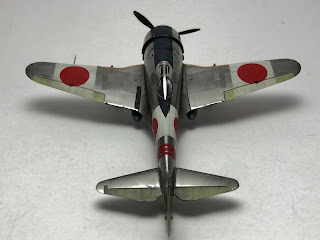 Hiko Dai 246 Sentai (Imperial Eagles No.19196) was established from Hiko Dai 13 Sentai at Kakogawa in August 1942 for air defence of the Osaka-Kobe area with Nakajima Ki-27 Type 97 fighters. As first established it was a two-Chutai unit embryonic to the 18th Air Brigade which had been augmented following the Doolittle raid in April of that year, to include a reconnaissance unit, intelligence unit, and signal unit incorporating air to ground radio and wired telephony for early warning. In April 1943 it re-equipped with the Ki-44 and in November, expanded to three Chutai, two of its Chutai moved to Taiwan to provide air defence of the Kaohsiang area in the south of the island. The unit re-grouped at Taisho in March 1944 and in August that year Maj Tsurayuki Ishikawa  assumed command and oversaw a period of intense training to operate the Ki-44 in the air defence role against the B-29, pilots passing through the 246th to other combat units. In June 1944 when raids against Kyushu began the 246th was transferred briefly to Ozuki in the Western District under the command of the 19th Air Brigade but in July returned to the 18th Air Brigade which was enlarged and strengthened with the 55th and 56th Sentai. 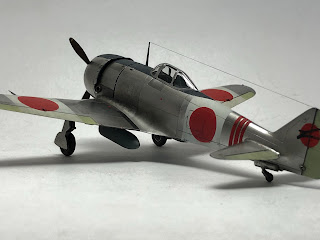 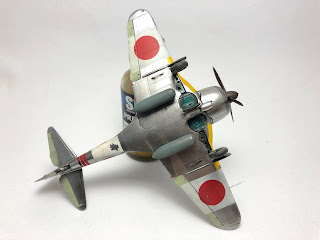 In October 1944 following US carrier raids against airfields on Taiwan the 246th was despatched south again to bolster air defence on the island. In November the unit was sent to the Philippines where it was reinforced with the detached 2nd Chutai of 29th Sentai under Lt FumihiroYabuta, operating from Zablan. The 246th lost the majority of its aircraft at Zablan on 14 December when it was caught returning from a long haul escort mission and low on fuel by a force of USN Hellcats. The surviving personnel returned to Japan and in early 1945, re-equipping with a mixture of Ki-44 and Ki-84 fighters, the unit resumed its air defence role over the Osaka, Kobe and Nagoya areas, claiming six B-29 kills on 26 June. The unit's last air defence sorties were on 14 August 1945 when a quartet of Shoki engaged a superior force of P-51s over Shiga, their leader WO Yoshito Yasuda claiming one P-51 shot down but Sgt Maj Kenji Fujimoto being shot down and killed in the engagement. In July 1945 the unit reported a strength of 18 Ki-44 as part of the 11th Air Division in the Permanently Stationed Air Defence Forces. 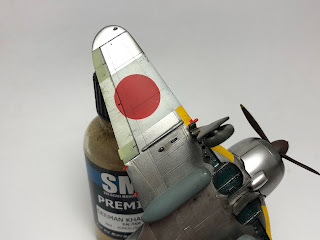 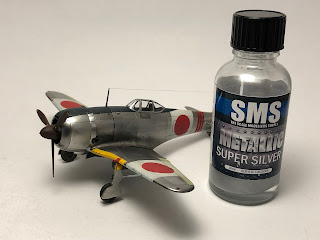 With special thanks to Jason for sharing these images and details of his build.

A most splendid representative of my favourite Nakajima fighter. The first picture highlights the wonderful aluminium paintwork perfectly and the Shoki appears much larger than 1/72. Great work Jason and many thanks Nick.

Fantastic work for so old kit. Splendid paintjob for rather difficult NMF. As usual very interesting and useful story. Much thanks for sharing.

Excellent workmanship on display ! Such a very well-rendered NMF finish!

Thanks to both Jason and Nick

Thanks, Jason and Nick. Very nice model and photography, and interesting information on the unit.

I have seen the excellent pics of this airframe (among other places, the old Arco Aircam title) - but this is the first build I've seen of it in any scale
Looks great!

Shokis's galore. Another excellent metallic finish, Jason. The old Hasegawa kit still looks great. Think I must have built a half dozen of them over the years. None this good though.

Very nice work, Jason. Excellent write up on the unit history, Nick. Thanks to you both for your time & trouble to share all this with us.