Kit Trivia - Yet Another Veteran Zero! 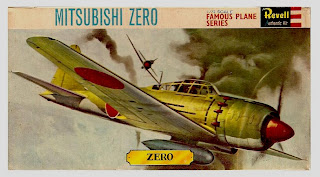 Revell's Zero was marketed in 1963 as kit # H-617, one of the first models in their 'Famous Plane' or 'Warbird' series of constant 1/72nd scale kits with box art by Jack Leynnwood. The other 1/72nd scale kits were the 'Memphis Belle' B-17F, Hawker Hurricane and Focke-Wulf 190.  Although not identified as such in the first edition the Revell Zero was meant to represent an A6M5c, but the simple kit was devoid of any wing armament and had a pinched, tapering cowling similar to the Frog kit. Later editions in a slightly larger box with the same box art had a projecting gun barrel moulded to each upper wing and identified it either as 'A6M56' or 'A6M5C'. Other issues were the central canopy being too tall and the wings too narrow in chord. The kit had none of the later series refinements, such as removable engine panels or an opening canopy.  As with previous Zero kits the box art and painting instructions omitted the blue-black cowling. An upper surface colour of 'grey-green' was suggested in the instructions but no colour was suggested for the undersurfaces, presumably expecting the modeller to make do with the kit plastic! Examples of this kit have been encountered moulded in various shades of sky blue, sky, duck egg green and eau-de-nil with later editions typically moulded in light grey.


The simple decal sheet consisted of Hinomaru, with white borders on upper wings and fuselage, and a white tail code for one aircraft ヨ-114 (the katakana character ヨ = 'Yo' for the Yokosuka Kokutai). The later Hawk model (which we shall also be taking a look at) was depicted as a unit stablemate, being ヨ-110. When comic book artist Ian Kennedy prepared his excellent artwork for Fleetway Library's Air Ace Picture Library #250 "Rocket Bomb Revenge" in July 1965, he also depicted an aircraft from this unit ヨ-117 (below). 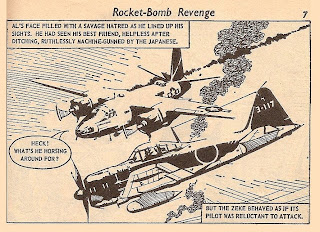 "Rocket Bomb Revenge" told the fabulous story of a mixed race spy masquerading as a Zero pilot and how his path crossed several times with a US B-26 Marauder crew. Ultimately he hi-jacks an 'Ohka' rocket-propelled suicide bomb, "switching off the fuses" and landing it intact on the deck of a USN aircraft carrier! The far-fetched storyline was ultimately rescued by the skilled pen work of Mr Kennedy and his appreciation for the actual shape and form of aircraft. Those editions of the Air Ace Picture Library which he drew are now eagerly sought after collectables. Note the economy of line in his work and the way he uses blank space to suggest high reflection off the aircraft canopy glazing.

"Rocket Bomb Revenge" was also unusual in featuring an attack by Kawasaki Ki-102 'Randy' heavy fighters, a Japanese Army type unknown to most schoolboys at that time. The storyline even mentions their 57mm nose cannon!

In 1969 Revell's Zero was also issued together with the Grumman Wildcat in the 'Fighting Deuces' series as Kit # H-220 (above). It survived until the 1990's when it was last re-issued with new box art (below) and revised markings for ツ-46 (from the Tsukuba Ku). 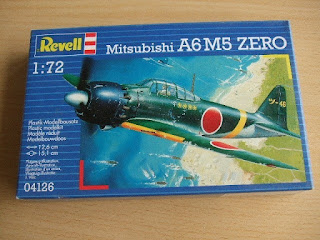