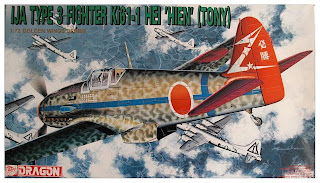 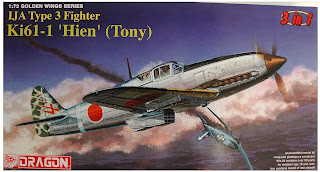 As a prequel to the forthcoming examination of all things Ki-61 and Ki-100 here is a brief look at the saga of Dragon's 1/72nd scale Ki-61 kit. Of all the perennial confusions surrounding Japanese aircraft the question of Tony variants is almost a constant.

Dragon's Tony was first released in 1994, quite eagerly awaited as the only previous kit in this scale was Hasegawa's 1972 Ki-61-1 Tei. Before that the very basic if not crude Revell 1962 Hien was the only game in town, discounting some odd scale Japanese examples and the Nichimo Ki-61-II which we will be examining in more detail in due course.

Dragon appear to have been confused between the Hei and Tei variants when they marketed their kit; because although it was boxed as a Hei, the nose panel detail resembles more closely the Tei and lacks any provision for the long-barreled Mauser 20mm wing cannon of the Hei.

In 2006 Dragon re-issued the kit as a "3 in 1" version, purporting to provide optional details for the Ko, Otsu or Hei variants. This kit also included a small photo-etch sheet. The optional details were an alternative cowling panel with Type 89 Kai 7.7mm weapons for the Ko, and the wing cannon barrels and enlarged wing cannon blisters for the Hei. In fact the Ko had the Type 89 weapons in the wings (with distinctive panels) and all three variants had the Ho-103 12.7mm weapons in the cowling. The nose panel details still resembled the Tei rather than the earlier versions. The box art depicted a well known Ko, for which the decals were provided, but there was no provision for the retracting tailwheel and tailwheel doors of this version.

The main difference between the Tei and earlier versions was the increase in the length of the nose, just forward of the wing leading edge, to accomodate the Ho-5 20mm cowling weapons and to achieve a new centre of gravity. As a result of these changes the overall length of the Hien was increased from 8.75m to 8.94m (approximately 7.5 inches - or approximately 2.65mm in 1/72nd scale). The requisite alteration to the cowling panel lines, details and relative position of the exhausts were the most visible aspects of the change. The four slots each side of the cowling just ahead of the windscreen were specific to the Ho-5, not present on the Ko, Otsu or Hei and another Tei feature included by Dragon. The venturi fitted below the windscreen on the port side of the fuselage and rather crudely moulded integrally to the kit part was present on only a few Tei, supposedly required for a new type of gyro gunsight.

For IJAAF aircraft the Ko, Otsu Hei, etc., sequential suffixes usually applied to armament changes only but as a convention have often been applied anachronistically to other airframe changes not officially recognised. The kanji characters are as follows:-

Identification of those characters can be useful in the study of aircraft plans and variant profiles in Japanese books. They originated from a calendar system in use during the Chinese Shang Dynasty and are known as the Ten (Celestial or Heavenly) Stems. Their common rendering in English as a, b, c etc., is not a direct translation of their meaning but just a convenient equivalence.