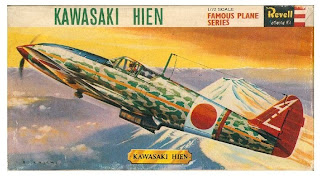 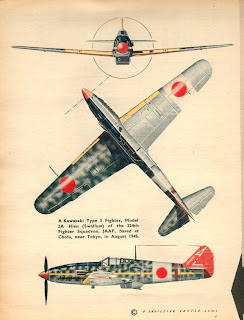 Like the Frog Zero, the colour scheme and markings chosen for Revell's 1/72nd scale 1963 Kawasaki Hien, and so memorably illustrated on the box art by Brian Knight, appear to have had their origin in a split 4-view painting by Peter Endsleigh-Castle which appeared in the December 1961 issue of RAF Flying Review magazine in conjunction with a brief article on the type entitled "Potent Swallow". The Hien was assessed by RAF Flying Review to be the best JAAF all-round fighter, whose success was marred by poor materials and workmanship.
Supposed to represent an aircraft of the 244th Sentai, the tail insignia of the Revell kit was only a very approximate imitation of the original,  but the colourful scheme and dramatic box art depicting a Ki-61 I Ko climbing over Mount Fuji captured the imagination. Originally issued as Kit # H-621 in the small black-ended box and molded in silver plastic, the earliest examples are much crisper and more detailed than the many later issues and featured an odd side-opening canopy (like the Bf-109), tried only on the prototype Hien with disastrous results. Later issues of the kit had a single-piece canopy.
If I recall correctly Revell's 'Famous Plane Series' was sold at W H Smith for 2/11d, almost a shilling more expensive than Airfix's 2/- kits but infinitely more enticing were the unusual subjects, evocative box art and working features like sliding canopies. Revell's Potter Bar marketing must have been quite good because I was even able to buy an Albatros DIII in my tiny local village post office. Prior to the arrival of Revell's Hien, Hayabusa and Hayate many an English schoolboy had no idea that the Japanese flew any fighters other than the famous Zero.
I was so captivated at the time by the sleek looks and "Interesting Facts About" my in-line engined Kawasaki that it appeared not once but twice in Christmas stockings and the name, incorrectly pronounced "Hine", became something of a family joke. When asking me about Christmas presents my mother would smile ruefully and say "Oh no, not another dratted Kawasaki Hine?" My father remained impervious to the appeal of Revell's Japanese quartet, dismissive of any aircraft not wearing RAF roundels.  It was therefore a surprise, many years later, when he had more time for reading about the subject, to hear him wax lyrical about the extraordinary range and flying qualities of the Zero.
Image credits: Box Art © Revell 1963; 4-View © RAF Flying Review & P Endsleigh-Castle 1961
Posted by Straggler 脱走兵 at 22:08