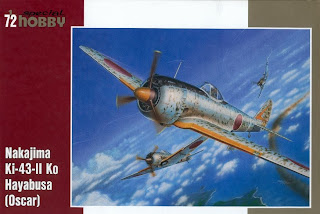 Hi Nick,
Thanks for the review- Hayabusa variants are indeed a maze.

I am thinking that the late style drop tanks were the type that mounted outboard of the landing gear legs, the early style inboard of the gear legs. If so, the mounting points were plumbed internally and not easily converted when the new items were produced. I am at work and do not have my books- I think that the Aero Detail volume has definitive info on this?

It is such a pity that the 1/48 Hasegawa kit was such a disappointment in so many ways- IMHO the worst modern kit from that company by far.

Thanks again for posting this Nick,
Dan

Great Review!! I am looking forward to the other Ki-43 kits that are to be released in the future by SpecialHobby/MPM. By the way the Eduard photoetched set for the Fujimi Ki-43I might have many parts that can be used on later Ki-43 variants.