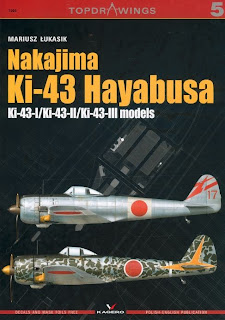 Something of a sleeper is Kagero's book of Hayabusa plans in their 'Topdrawings' series. This slim 23 page publication contains plans by Mariusz Lukasik for all the major variants of the Type 1 Fighter in 1/72nd, 1/48th and 1/32nd scales. The 1/32nd scale plans are on a separate folding sheet.
The centre section of the book contains well-rendered colour profiles and partial plans by Arkadiusz Wróbel for 4 different Hayabusa aircraft and the rear cover has a further two colour profiles.
The final section of the book details the various changes to the airframe as it was developed with schematic drawings in 1/72nd scale. This identifies the early Ki-43-II as the "pre-production series" and suggests that the reduced wingspan was introduced at the start of the II series. This is not correct as early Ki-43-II aircraft retained the long wingspan of the Ki-43-I.
A set of decals in the three scales and two sheets of stencils in 1/48th and 1/32nd scales rounds off this attractive package.
The accuracy of scale plans is always a contentious issue so I won't comment on these other than that they appear to depict the airframe correctly and the top line of the fuselage seems to conform better to photographs than some other plans of the aircraft.
Whilst this publication is not as comprehensive as the Aero Detail book it will probably be easier to obtain and therefore more accessible as a resource for those embarking on a Hayabusa build. The colour profiles are attractive but feature well known aircraft, including Kato's early Type 1. Unfortunately the 64th Sentai 'arrow' tail marking is once again depicted incorrectly as asymetrical and this mistake is repeated on the decal sheet too. It is difficult to understand why this error is continuously repeated as there are a multitude of photographs available which show the correct form and proportions. The cobalt blue-edged white stripes for Kato's machine are not included with the decals or stencils. Whilst they can be painted on the model the fine blue edging would have to be sourced from solid colour decal sheets and the colour then matched to the Kagero decal. It may have been better to have chosen a different option, especially as Kato's aircraft has already been featured in the Fujimi, Nichimo and Hasegawa kits.
The aircraft featured in colour and on the decal sheet are as follows:-
1. Ki-43-I s/n 318 of 64th Sentai, flown by Tateo Kato in Spring 1942, camouflaged green
2. Ki-43-II 'late series' of 71st Sentai, in natural metal with Homeland Defence bands
3. Ki-43-II 'early series' of 3rd Chutai, 54th Sentai in the Kuriles, September 1943, green mottle on natural metal
4. Ki-43-II 'late series' of 2nd Chutai, 50th Sentai, green mottle on natural metal
5. Ki-43-II 'late series' of Kumagaya Flying School, natural metal with Homeland Defence bands
6. Ki-43-I s/n 483 of 47th Dokuritsu Chutai, at Chofu, summer 1943, camouflaged green with Homeland Defence bands
The latter profile depicts the aircraft with its undercarriage lowered and standing on the ground but the pilot standing by the fuselage is far too small! The Hayabusa appears to be of P-47 proportions in comparison! The diminutive pilot's black boots and brown (?) parachute harness are not typical for the JAAF. Decals and/or stencils are provided for all these aircraft in the three scales with the exception of the 50th Sentai lightning bolt and tail characters which are not provided in 1/32nd scale. Stencils for Hinomaru are included in 1/48th and 1/32nd scale but there are no 1/72nd scale Hinomaru either as decals or stencils. I think that the selection and provision of the decals and stencils could have reflected a little more care.
Despite the nits I have picked this is an attractive and useful resource for modellers at a reasonable price and is recommended to those who do not already have the Aero Detail book or previous monographs on the type.
Image credit: © Kagero 2009
Posted by Straggler 脱走兵 at 20:52

Hi Nick, Is it clear cut the early Ki-43-2s had the longer length wings from the early series. a friend has suggested there could be some ( as always) conflicting references (francillon vs aero detail). I must admit it was the first time I had heard the long wings were carried over but it is credible. Regards Mark

Yes. I've now confirmed it myself from film footage of an early Ki-43-II taxying out at Mingaladon. The film reveals the engine details including the small triangular oil cooler. The film continues to show the same aircraft from directly behind revealing the plan view of the wing and the proportionate relationship between wing tips and ailerons.

I only started looking for visual evidence of this when it was reported in Mr James I Long's 1998 research document 'Japanese Army Type 1 Fighter (Ki-43) Models, Record of Production, and Serial Numbers' prepared for Mr Nohara Shigeru.

Another previously considered clue was the RAF SEAC intelligence document reporting the shortened wings which came much later than the introduction of the Ki-43-II to the theatre (and the examination of Ki-43-II aircraft shot down). The only sense that can be made of it is by presuming a later introduction of the shortened wings than previously believed.

"Recent information from Technical Intelligence has now settled satisfactorily the question of the fighters in Burma with 'square wing tips'. It will be recalled that over a period these fighters have been constantly reported as HAMPS presumably because of the common characteristic of wing tip shape. Attention has been drawn previously in this Section to two points in connection with this type of aircraft:-

a) Its arrival in strength coincided with the arrival of a newly equipped fighter unit;

b) The possibility of it being a new type of AAF fighter.

It has now been established that this is the final development of Type 1 Fighter OSCAR Mark 2 which has reduced wing span, with blunt rounded wing tips, and this may give the false impression of HAMP. This new type of fighter has been identified since the withdrawal recently of some fighter strength and a reasonable assumption is that OSCAR Mk 2 will for the present form part of the normal replacement to fighter units."

Accompanying this report are detailed structural drawings of the reduced span wing tips clearly prepared from the examination of actual examples.

I think there is sufficient evidence now to conclude that Mr Fancillon's accounting may be considered superceded. We still do not know at which stage on the Ki-43-II production line the reduced wingspan was introduced.

I am asked by a friend of what the tail markings of 33rd Sentai was. I can only find the later version of it when they moved to Burma in late 1943. But I need the one around mid-1943. Could you tell me where to find it?