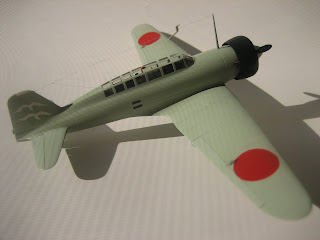 This beautiful model was built by Marian Holly from the original Mania 1/72nd scale kit (subsequently re-issued by Hasegawa), and was awarded Third place in the 1/72 single-engine category at IPMS region 1 held at Long Island, Republic Airport from 30th April to 1st May 2010. 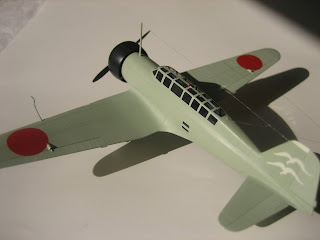 Mario found the plastic of this old kit was rather brittle and required careful trimming. The cockpit interior is already fairly detailed out of box so he only added seatbelts from lead foil and buckles from thin copper wire. The interior was painted to represent JAAF # 3 Hairanshoku for which Mario used Pollyscale RLM24 blue straight from the bottle. The remainder of the airframe went together relatively easy and quickly as the original was a fairly simple aeroplane. Mario filled the wing interior spaces with strips of thick plastic and Tamiya polyester putty in order to maintain the proper dihedral of the fairly fragile kit parts, and to sustain the stress of the planned riveting job. 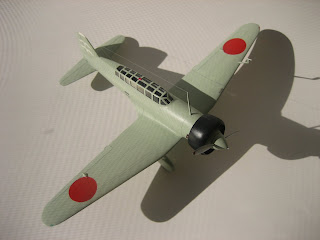 All control surfaces were sanded down and rescribed, the edges being cut down with PE razor (To his surprise, Mario doesn't see this being done even on larger scale kits), rib tapes were masked with Aizu micro tape (which he recommends) and then airbrushed with Mr Surfacer 500. Wheel spats were pinned with brass rod and glued with 5 min epoxy glue for additional strength. Panel lines were restored as necessary then the whole airframe was sanded, rivets added, sanded again and polished. 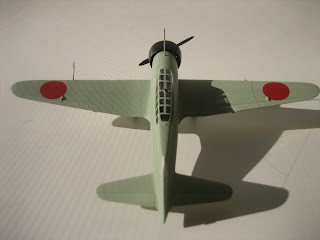 The canopy required quite some dry fitting. It was polished from inside using Tamiya 1000 compound then given a single coat of Future. The cockpit deck was painted "cowling color" and the canopy fixed on using black CA glue (made by Wave in Japan). Mario was not happy with the canopy framing so he sanded it down, polished, masked using Aizu tape again and airbrushed with "cowling color". The whole airframe was primed with Gunze (GSI Creos) Mr Base White and after drying lightly polished with 2000 grit sand paper. Mario cut masks from Tamiya tape for the sentai markings (following the Rising Decals sheet) and hinomaru, positioned them and airbrushed his own Gunze (GSI Creos) Mr Color mix for JAAF # 1 Hairyokushoku. This is C128 gray-green with a lot of white and a few drops of bright blue added. Then Mario masked around white base of the hinomaru and airbrushed C327 (FS 11136) red straight out of the bottle. After removing all masking tape the whole surface was polished with wet 2000 sand paper, sealed with Mr Color Super Clear and then a coat of semi-flat varnish was airbrushed on (Mr Color Super Clear + Flat). 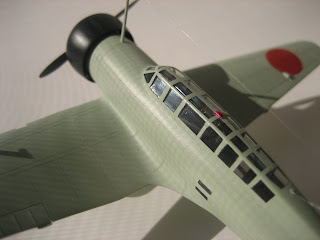 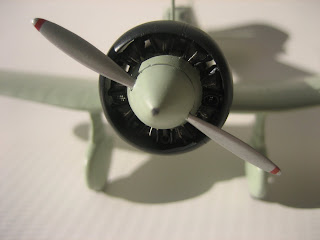 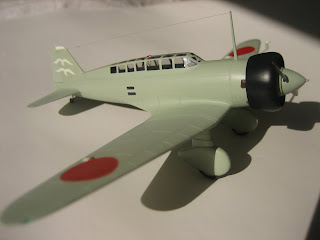 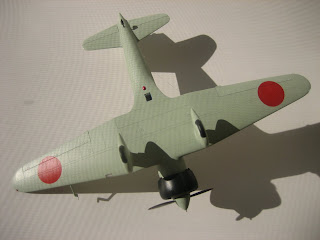 Fantastic!
Always nice to see such a fine effort in 1/72 scale. Very nice indeed.
Thank you for posting.
Regards, noel

Beautiful! The riveting is amazing. And this is the first finished model of this kit that I've seen that eliminated the problem of the too-high canopy sills as well as canopy framing that is too thick overall. Even in 1/72 it makes a remarkable difference. Thanks for the posting.

I agree with you, Nick, that Tamiya and Hasegawa have missed the boat, especially with their domestic market, in not issuing this in 1/48.